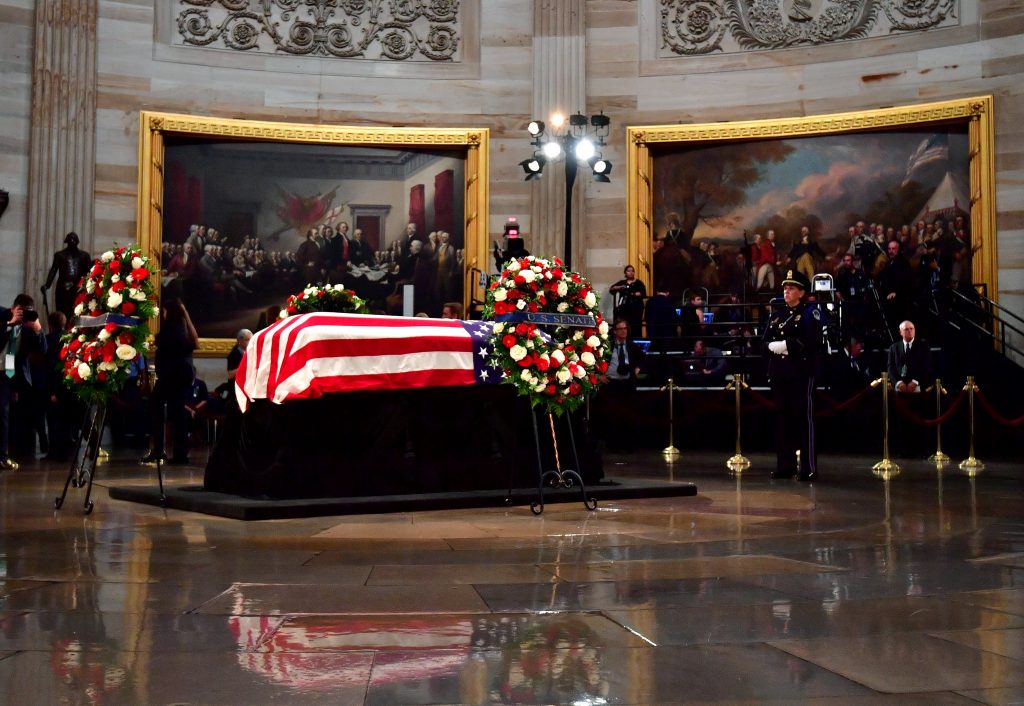 A bitterly divided Congress came together on Friday to commemorate the late Senator John McCain, remembering him as a tenacious fighter for his ideals who never lost his sense of humor or his ability to inspire others.

Leaders from both parties gathered in the U.S. Capitol Rotunda on Friday to honor McCain on the third of five days of memorial celebrations in Arizona and Washington for the Vietnam War hero and two-time Republican presidential candidate.

Republican President Donald Trump was absent from the ceremony, a result of the animosity between the two men that lingered even after the Arizona senator’s death on Saturday from brain cancer.

Trump will also miss Saturday’s service at the Washington National Cathedral, where former President Barack Obama, the Democrat who defeated McCain in 2008, and former Republican President George W. Bush, who beat McCain in their party’s 2000 presidential primary, will pay tribute to the late senator.

Senate Republican Leader Mitch McConnell, who often fought with McCain over issues such as campaign-finance reform and Obama’s healthcare overhaul, praised him as a “generational leader” in the Senate.

“He would fight tooth and nail for his vision of the common good. Depending on the issue, you knew John would either be your staunchest ally or your most stubborn opponent,” McConnell said.

“At any moment, he might be preparing an eloquent reflection on human liberty or a devastating joke, served up with his signature cackle and that John McCain glint in his eye,” he said.

House Speaker Paul Ryan said he was sometimes on the receiving end of McCain’s “distinct brand of candor.”

“This is one of the bravest souls our nation has ever produced,” Ryan said.

Vice President Mike Pence described McCain as “an American patriot,” and said Trump had asked him to be there to pay his respects.

After the ceremony, the public will pass through the Rotunda for six hours to pay their respects to McCain by filing past his coffin, which was brought into the Rotunda and placed atop a pine board catafalque originally built in 1865 for President Abraham Lincoln’s casket.

McCain was involved in planning the events around his funeral. He made it clear to family and friends that he wanted Democratic former Vice President Joe Biden, Bush and Obama to speak, but that Trump was not welcome.

The pallbearers at Saturday’s cathedral service will include Biden and liberal activist Warren Beatty, alongside former Senator Phil Gramm and ex-Defense Secretary William Cohen, both Republicans.