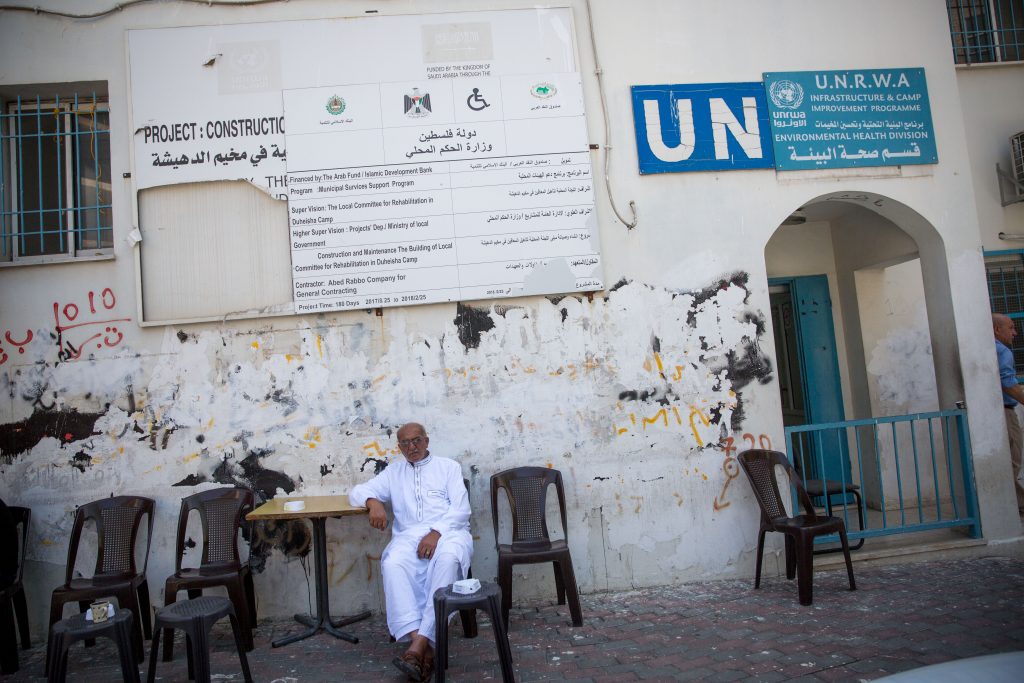 The United States has decided to cancel all funding for UNWRA, the United Nations agency dedicated to providing aid for Palestinian refugees and their descendants. A report in the Washington Post said that an official announcement on the matter will be made in the coming weeks.

The U.S. will also call for the U.N. to recalculate the number of Palestinian refugees on UNWRA’s rolls, reducing the number from some 5 million to about a tenth of that, the report said.

The Post story confirmed a report on Hadashot News earlier this week that the U.S. would either stop or significantly cut its assistance to UNWRA, the United Nations agency that deals exclusively with Palestinian refugees and their descendants, effectively ending the possibility of the “Palestinian right of return,” which holds that the descendants of Arabs who fled Israel in 1948 must return to their parents’ or grandparents’ property in order for there to be peace.

Israeli officials have for years decried the UN organization that, according to many, preserved the status of “refugee” among Arabs who fled what would become the State of Israel in 1948. Legislation in many Arab countries prevents them from becoming citizens, and many are forced to live in refugee camps, which over the years in many cases have become thriving cities, with infrastructure, schools, and businesses – and much of it funded by UNWRA.

The U.S. has been the largest donor to UNWRA. According to the Post, Washington has generally supplied the agency with about a third of its budget, which in 2017 was $1.1 billion. Earlier this year, the U.S. cut a scheduled payment of $130 million to the agency by half, and “under the new decision, that will be the last donation,” the report said.

Israeli officials have also hotly disputed the number of refugees UNWRA is supposedly taking care of; while Israel counts no more than a half million people who actually fled the borders of Israel in 1948 (many of them elderly), UNWRA has more than 5 million refugees on its books – the result of counting as refugees the descendants (now the third and fourth generation of such “refugees” in many families) of those who fled Israel.

According to U.S. administration sources quoted by Hadashot News, the Americans have decided to adopt the Israeli viewpoint on the matter. Thus, the new U.S. policy will be to encourage Palestinians to seek citizenship in the countries where they currently live, and to cut aid to UNWRA significantly, if not to eliminate it altogether. The U.S. will also ask Israel to reconsider the permits Israel has given UNWRA to operate in Yehudah and Shomron, in order to ensure that Arab countries do not try to keep UNWRA going with their own funding in order to make up the American cuts to the organization’s budget.

Speaking Tuesday, U.S. Ambassador to the United Nations Nikki Haley told a Washington forum that there were several reasons for the U.S. to reconsider its policies on the refugee issue. “First of all, you’re looking at the fact that, yes, there’s an endless number of refugees that continue to get assistance, but more importantly, the Palestinians continue to bash America,” she said. If helping the Palestinians was so important, it could be done by their fellow Arabs. “Where is Saudi Arabia? Where is the United Arab Emirates? Where is Kuwait? Do they not care enough about Palestinians to go and give money to make sure these kids are taken care of,” Haley said.

Commenting on the report, Transportation Minister Yisrael Katz said that he “congratulates U.S. President Donald Trump for this decision to remove American recognition of UNWRA, and thus end American recognition in the right of return. This step, like the historic decision to relocate the American embassy to Yerushalayim, essentially cancels two U.N. resolutions. It is a great victory for Israel.”