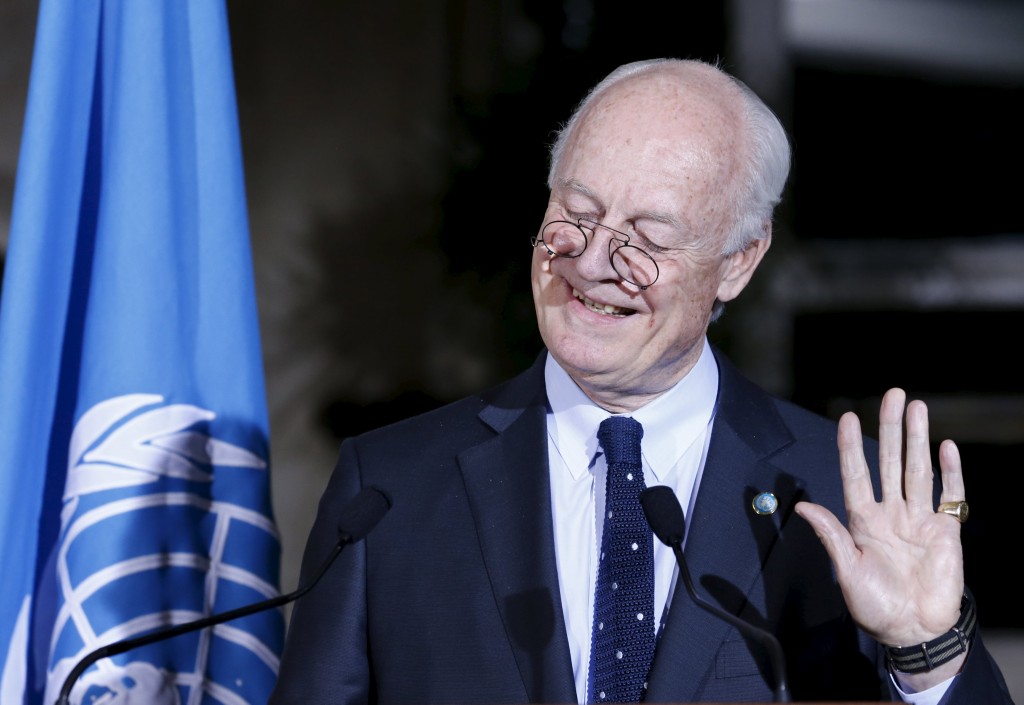 The United Nations called on Russia, Iran and Turkey on Thursday to forestall a battle in Syria’s Idlib Province which would affect millions of civilians and could see both militants and the government potentially using chlorine as a chemical weapon.

U.N. Syria envoy Staffan de Mistura said there was a high concentration of foreign fighters in Idlib, including an estimated 10,000 fighters designated by the U.N. as terrorists, who he said belonged to the al-Nusra Front and al-Qaida.

There could be no justification to use heavy weapons against them in densely populated areas, he said. Miscalculations could lead to unintended consequences, including the possible use of chemical weapons.

“Avoiding the potential use of chemical weapons is indeed crucial,” de Mistura told reporters in Geneva.

“We all are aware that both the government and al-Nusra have the capability to produce weaponized chlorine.”

Syrian Foreign Minister Walid al-Moualem, speaking during a meeting with his Russian counterpart Sergei Lavrov in Moscow on Thursday, said: “We are at the final stage of solving the crisis in Syria and liberating our whole territory from terrorism.”

“I assure you that we do not have chemical weapons and are not able to use them,” he added, according to Syrian state news agency SANA.

Idlib Province is the last major rebel-held area in Syria, serving as what the U.N. has called a “dumping ground” for fighters and civilians evacuated from other battles. It is one of the areas that Russia, Iran and Turkey agreed to “de-escalate” last year at a series of talks in the Kazakh capital Astana.

But a source said on Wednesday that Russia’s ally, Syrian President Bashar al-Assad, was preparing a phased offensive there.

Russian Foreign Minister Sergei Lavrov said on Wednesday that terrorists in Idlib had to be liquidated, describing them as “a festering abscess.”

“Why such a hurry, and not provide more time in order to allow more discussions, especially among the Astana guarantors?” de Mistura said, referring to Russia, Iran and Turkey.

The potential battlefield contains two crucial roads, transport arteries between major Syrian cities, which the Syrian government argues must be made safe. De Mistura asked if it was necessary to create a “worst-case scenario” just to secure Syrian government access to the roads.

It would be better to set up humanitarian corridors to evacuate civilians than rush into a battle which could prove to be a “perfect storm,” he said.

“The lives of 2.9 million people are at stake, and international mutually threatening messages and warnings and counterwarnings are taking place in the last few days.”