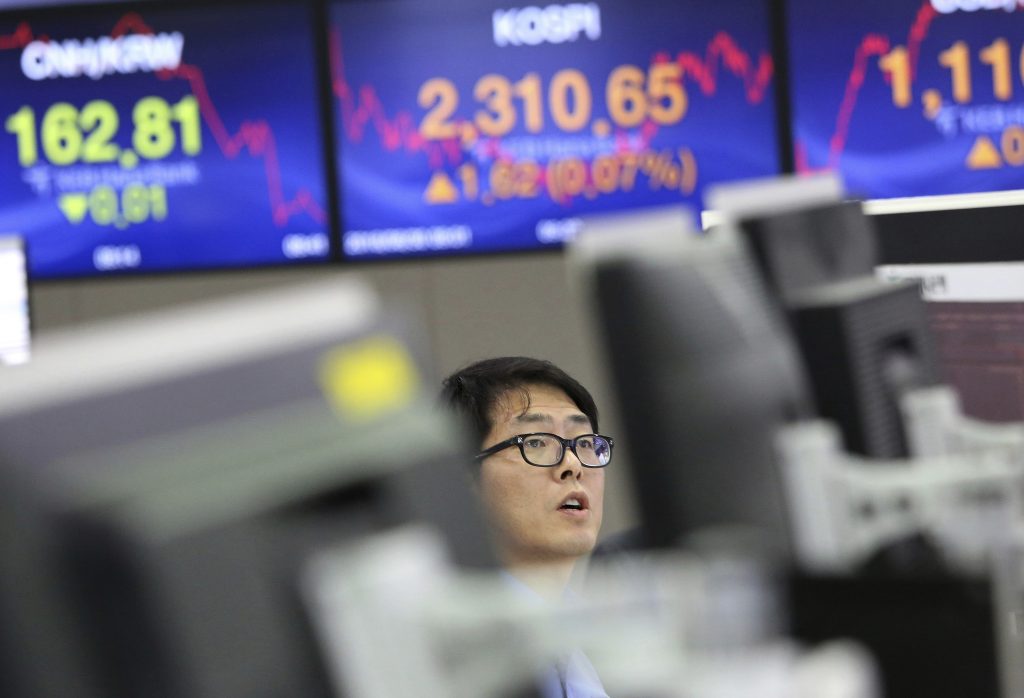 Asian stocks handed back earlier gains and fell on Thursday, with Chinese markets fixed firmly on risks from the China-U.S. trade war and taking little comfort from an apparent easing in business tensions in North America and Europe.

Spreadbetters expected European stocks to open mixed, with Britain’s FTSE and Germany’s DAX each slipping about 0.1 percent and France’s CAC inching up 0.05 percent.

The leaders of the United States and Canada expressed optimism on Wednesday that NAFTA negotiations would meet a Friday deadline for a deal, days after the U.S. and Mexico reached a bilateral agreement.

But MSCI’s broadest index of Asia-Pacific shares outside Japan dropped 0.3 percent, with broad gains across the region offset by losses in China.

“Investors are relatively pessimistic and cautious for now amid low levels of trading volume, as there are still concerns over the development of the Sino-U.S. trade spat,” said Yan Kaiwen, an analyst with China Fortune Securities.

U.S. tariffs on another $200 billion of Chinese goods are expected to take effect later next month.

Major South Korean steelmakers such as POSCO and Hyundai Steel, however, gained after news that U.S. President Donald Trump signed a proclamation permitting targeted relief from steel and aluminium quotas from countries including South Korea.

Canada rejoined the talks to modernise the 24-year-old NAFTA after Mexico and the United States announced a bilateral trade deal on Monday, which had helped global equities begin the week on stronger footing.

The White House has said it wants to settle NAFTA before negotiating with China.

The pound stood tall as fears of a ‘hard Brexit’ eased after the European Union’s chief exit negotiator signaled an accommodative stance towards London in ongoing talks.

Sterling rose to a 3½-week high $1.3039, extending its gains after surging more than 1 percent overnight.

The dollar index against a basket of six major currencies struggled near a four-week low of 94.434 plumbed on Tuesday, weighed by the pound’s rally.

The greenback has also been on the defensive this week with safe-haven demand for the currency diminishing in the wake of improving risk sentiment in broader markets.

The Chinese yuan lost about 0.2 percent, touching a six-day low of 6.8332 per dollar in onshore trade.

Investors kept a wary eye on the Turkish lira, which stretched losses and retreated to a two-week trough after Moody’s on Wednesday downgraded 20 Turkish banks in a further blow to a country already gripped by a financial crisis and stuck in a diplomatic row with the United States.

The IMF said it was studying the request from Argentina to speed up disbursement of the $50 billion loan programme.

Oil contracts had risen more than 1 percent on Wednesday, supported by a drawdown in U.S. crude and gasoline stocks and as U.S. sanctions reduced Iranian crude shipments.