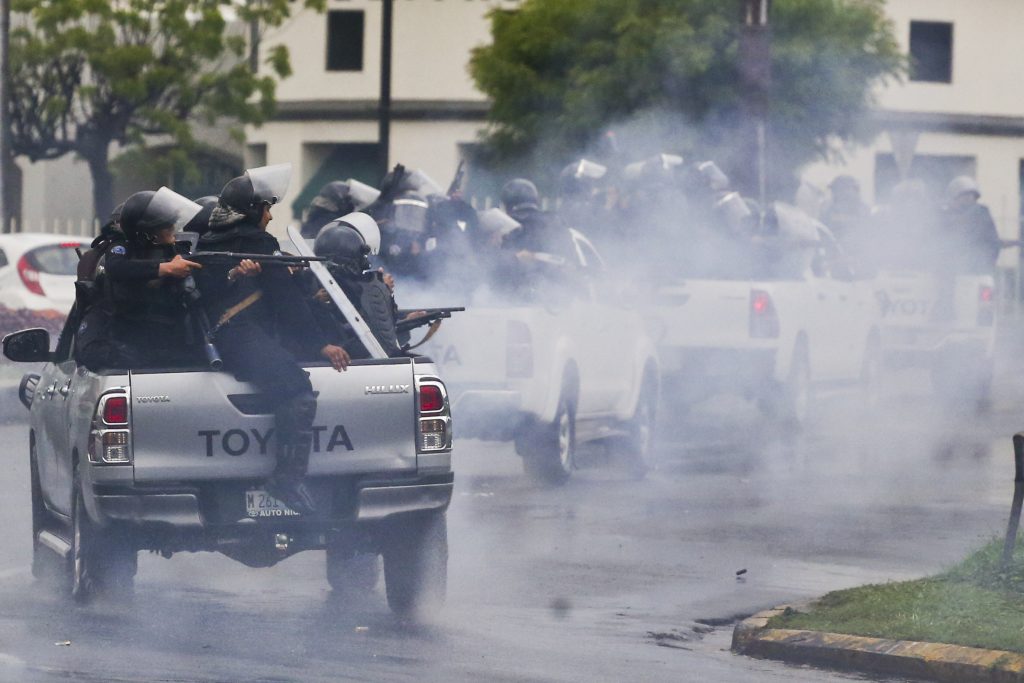 A United Nations report released Wednesday on four months of unrest in Nicaragua describes a comprehensive effort of repression by the government that extends from the streets to the courts.

The report by the Office of the U.N. High Commissioner for Human Rights calls on the government of President Daniel Ortega to immediately halt the persecution of protesters and disarm the masked civilians who have been responsible for many of the killings and arbitrary detentions.

More than 300 people have been killed in violence since mid-April in this Central American nation. Neighboring Costa Rica has been flooded with thousands of requests for asylum by people fleeing Nicaragua.

The report describes illegal arrests, torture and closed trials. Doctors, professors and judges who have spoken out or protested have been dismissed from their jobs to discourage people from participating in or supporting the protests.

“The level of persecution is such that many of those who have participated in the protests, defended the rights of the protesters, or simply expressed dissenting opinion, have been forced to hide, have left Nicaragua or are trying to do so,” according to the U.N. report.

Zeid Ra’ad al-Hussein, the U.N. human rights chief, told reporters in Geneva that “repression and retaliation against demonstrators continue in Nicaragua as the world looks away.” He urged the international community to take “concrete action to prevent the current crisis in Nicaragua from descending into deeper social and political turmoil.”

Ortega’s government dismissed the report as baseless and relying on anti-government media accounts. It denied accusations of excessive use of force against protesters.

“The report is biased and slanted with subjective assertions,” the government said in a statement, which also noted that it included no mention of the attempted coup d’etat alleged by Ortega.

It said the U.N. had not been invited to evaluate the human rights situation, but rather to accompany the verification commission established as part of the national dialogue. It accused the U.N. of overstepping its authority and violating Nicaragua’s sovereignty.

In mid-April, retirees and students marched to protest cuts to Nicaragua’s social security benefits decreed by Ortega. They were met with violence from young government supporters and riot police. The president eventually retracted the changes, but protests quickly evolved into calls for him to step down.

University students across the country led the protest effort and took over a number of campuses. But in July the government unleashed heavily armed civilian forces that worked with police to clear the barricades that had been erected on strategic highways and throughout some neighborhoods.

There was a short-lived dialogue between the government and opponents, but Ortega accused the Roman Catholic bishops mediating the talks of being part of a coup conspiracy and talks have not resumed. Ortega has blamed international agents and internal enemies of conspiring to overthrow his government. He has said he will not step down before his term ends in 2021.

Protests continue, but they are smaller as student leaders have been arrested or forced into hiding or exile.

“There are currently no conditions for the free and safe exercise of the rights to freedoms of expression, peaceful assembly and association,” the U.N. report said.

The U.N. team reached its conclusions despite government obstacles thrown in its path. It said team members could not access relevant government agencies or observe court hearings for those accused of crimes ranging from organized crime to terrorism for participating in the protests. When the team attempted to travel outside the capital, the foreign ministry forbade it for security reasons.

Arbitrary arrests are conducted without arrest or search warrants, the team found. Detainees are typically held incommunicado for days before their families find out where they have been taken.

This month The Associated Press reported on student protesters who were arrested, beaten and tortured by police and armed civilians. One expectant student was beaten, despite making her condition known to her captors, and eventually lost her child.

When some families made habeas corpus filings with the courts in an effort to locate their missing relatives, the petitions were initially assigned to dead judges, the U.N. report said. U.N. investigators believe it was an effort to delay the proceedings.

On Monday night, a judge convicted two young men in the April 21 killing of journalist Angel Gahona in Bluefields. His widow, Migueliuth Sandoval, said Tuesday that the two men are innocent.

“This decision is humiliating, it doesn’t give us justice. Because we know that these guys didn’t kill my husband, that those who really did it are riot police, because there are videos indicating it, that my husband was surrounded by police,” Sandoval said.