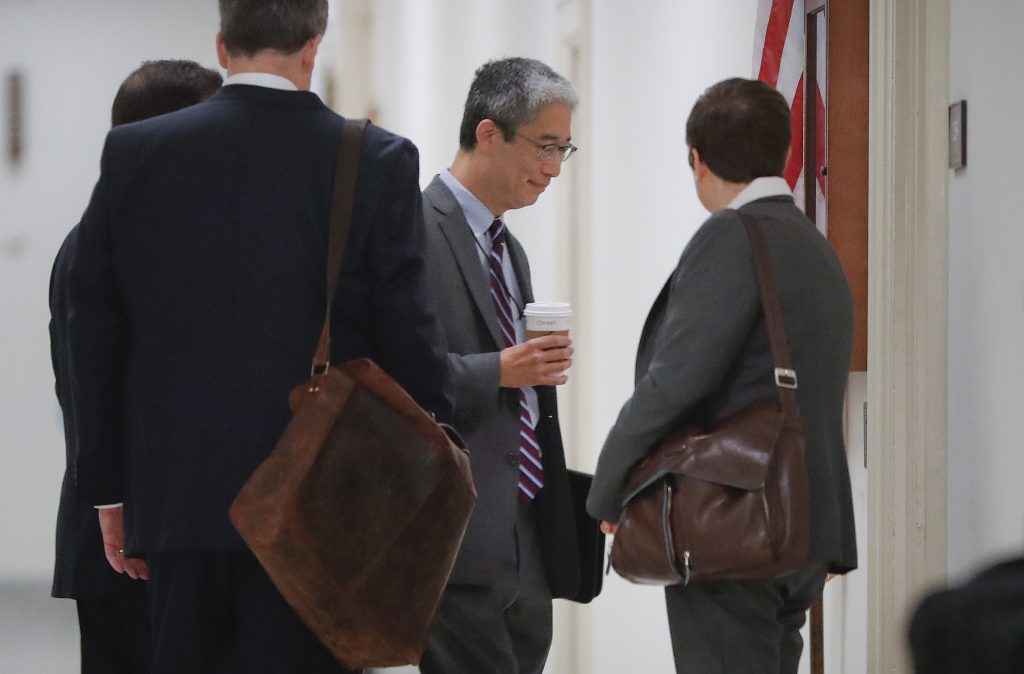 A longtime government lawyer who has become a central figure in President Donald Trump’s efforts to undermine the Russia investigation underwent more than seven hours of questioning by Republicans on Tuesday on Capitol Hill.

Bruce Ohr was grilled behind closed doors by two GOP-led House committees that are looking into decisions made by the Justice Department ahead of the 2016 presidential election.

The lawmakers are interested in Ohr — he has also been the subject of Trump’s angry tweets — because of his relationship with Christopher Steele, the former British spy whose opposition research on Trump’s Russia ties was compiled into a dossier and turned over to the FBI before the presidential election.

Trump and his allies question the origins of the FBI’s investigation into potential coordination between Russia and the Trump campaign, which was taken over by special counsel Robert Mueller in May 2017. Trump and some House Republicans say the dossier created a politically tainted pretext for the investigation, even though the probe began weeks before the bureau received the documents.

Republican Rep. Matt Gaetz of Florida, one of the Republicans who attended Tuesday’s interview, said that, so far, Ohr’s interview and others have shown an “excessive reliance” on the dossier.

“And if the dossier truly is the rotten foundation upon which the Mueller church is built, I think that’s an important revelation,” Gaetz said.

Democrats say the entire GOP investigation is an attempt to undermine Mueller. They have criticized the Republican’s focus on Ohr as overblown and misleading.

A Harvard-educated lawyer who was a federal prosecutor in Manhattan in the 1990s, Ohr at the time of the presidential election was a high-ranking official in the deputy attorney general’s office. But it’s Ohr’s relationship with Steele that has given fodder to Republican critics in Congress and raised concerns that he was operating outside his job description.

The two had met a decade earlier, bonding over a mutual interest in Russian organized crime and forging a friendly relationship that persisted over the years.

Though Ohr did not handle national security or counterintelligence work in the deputy attorney general’s office, he nonetheless became a point of contact for Steele to share information with in the months leading up to the 2016 presidential election. Ohr passed along tidbits he learned to the FBI, which was conducting its own investigation.

Glenn Simpson, the co-founder of Fusion GPS, the political research firm that was paid by Democrats and hired Steele for the investigation, told House lawmakers in a closed-door meeting last year that he also met with Ohr at Steele’s behest amid what he said was anxiety that federal investigators were not taking seriously enough the threat of Russian election interference and the information that Steele had accumulated.

Aside from their own personal connection, Ohr’s wife, Nellie, was working at Fusion GPS — a connection Trump and his allies have seized on as they allege anti-Trump bias in the department.

During breaks from the interview, several of the GOP lawmakers said Ohr’s testimony differed from Simpson’s and shed new light on the credibility of the dossier. But they would not give details.

Ohr remains with the Justice Department, but amid the GOP criticism and a change in leadership, he was reassigned from his job in the deputy attorney general’s office and given new responsibilities. But there are no signs of any effort or desire by department leadership to punish him in the ways advocated by the president.

Trump has kept the pressure on Ohr — and his boss, Attorney General Jeff Sessions — on Twitter.

“Will Bruce Ohr, whose family received big money for helping to create the phony, …and discredited Dossier, ever be fired from the Jeff Sessions “Justice” Department? A total joke!” Trump tweeted Aug. 20.

Trump has also suggested revoking Ohr’s security clearance, along with others in the department who were related to the Russia investigation.

At least seven Republican House members traveled to Washington over the August recess for the interview. No Democratic lawmakers appeared to attend, though staff were in the room.