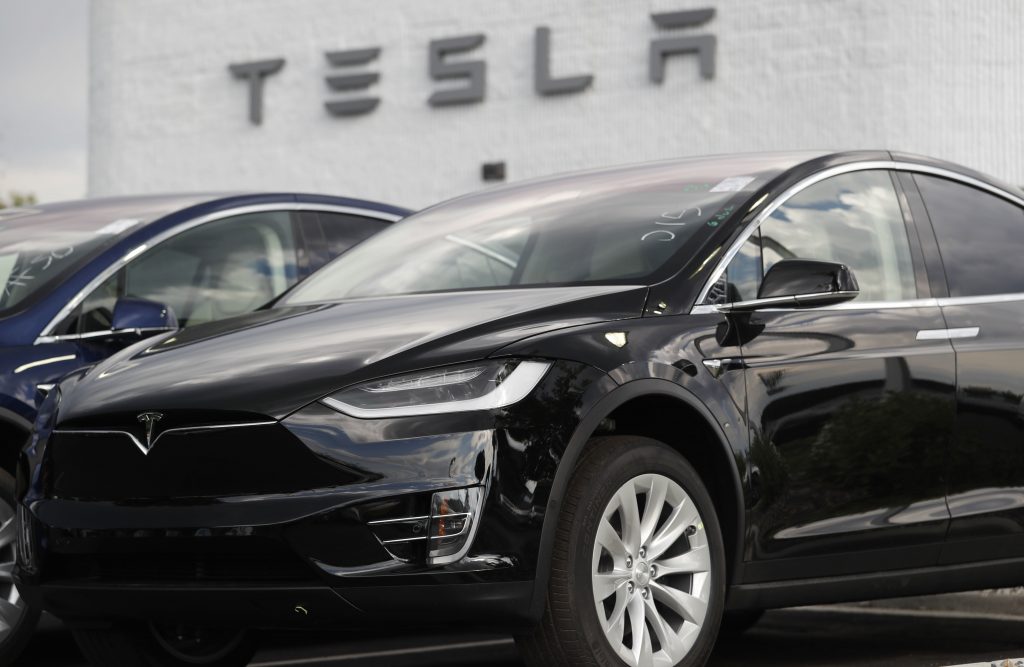 While Tesla grapples with internal issues like production delays, a sometimes-erratic CEO and a recent about-face on whether to go private, its rivals are moving aggressively into the luxury electric vehicle space.

In the next few days, German competitors Mercedes-Benz and Audi, the luxury arm of Volkswagen, are both showing off production-ready electric sport-utility vehicles aimed at Tesla’s Model X.

Meanwhile, Jaguar Land Rover offers the I-Pace electric SUV while further out, Porsche is taking on Tesla’s Model S high performance luxury car with the Taycan, expected to reach the market in late 2019.

The established carmakers have multiple motives. They need zero driving emissions vehicles to meet tougher greenhouse gas limits coming into effect in Europe in 2021. Diesel is in the doghouse. And China, a major market, is pushing hard for more electrics.

But the new models will also aim to win back some of the luxury customers drawn away by Tesla’s electric vehicles at a time when the company is consumed by multiple distractions . Its CEO, Elon Musk, took to Twitter on Aug. 7 to abruptly announce he had secured funding to take his company private, only to turn around 17 days later to say that Tesla would remain public . The electric carmaker is also facing financial pressure, with a $230 million debt payment that’s due in November on top of the $920 million that must be paid off three months later. And it has only recently hit production targets for its Model 3 mass-market vehicle.

In the meantime, its rivals — who had emphasized diesel and hybrids — are finally rolling out the leading edge of what they say will be a slew of all-electric models. Their latest offerings are “the vanguard” of more to come, said Ferdinand Dudenhoeffer, director of the Center for Automotive Research at the University of Duisburg-Essen.

“By 2020, Tesla must stabilize itself or be overtaken,” he said.

The new entrants challenge what has been one of Tesla’s key selling points: range. The EQC sport utility crossover from Daimler AG’s luxury brand Mercedes, for instance, should go up to 300 miles on a single charge. That’s comparable to Tesla’s SUV, the Model X, which has a range of up to 295 miles. The EQC, to be unveiled outside of Stockholm on Sept. 4, is the first in the Mercedes EQ sub-brand that bundles the company’s efforts in electric, connected and autonomous driving. Media representatives didn’t provide a price ahead of the unveiling.

Volkswagen’s Audi will show off its e-tron in San Francisco on Sept. 17. It offers more than 248 miles on a single charge. The company says the e-tron should be able to use high-speed charger facilities — if they’re available — to charge in less than 30 minutes. The German price will be around 80,000 euros ($93,000) and it should go on sale near the end of the year in Europe, and next year in the U.S.

The Porsche Taycan will also pose a stiff challenge to Tesla’s Model S in terms of range: Porsche claims it can load enough power for 248 miles in just 15 or 20 minutes. The company hasn’t announced a price. The I-Pace, whose price starts at $69,500 before local and federal incentives, offers 292 miles under the tougher European Union standard. The Model S, meanwhile, has a range of up to 335 miles.

Not that Tesla is standing still while the competition laps it. Musk has said the company intends to develop a Model Y, a small SUV to be unveiled in the first half of next year — a growing sales category that other carmakers have been piling into as fast as they can.

Chris Hopson, manager of North American light vehicle forecasting for IHS Markit, said that established manufacturers are going electric not just in response to Tesla, “but because of a whole host of other things, with Tesla in mind.” New electrics serve “not just to alleviate some of sales going to Tesla but to also to grab hold of the ongoing trend globally toward electric vehicles.”

The electric push also comes in the wake of Volkswagen’s 2015 diesel scandal. The company’s illegal rigging of vehicles to cheat on emissions testing helped turn consumers off diesels. Falling diesel sales numbers make it harder for European car makers to meet lower fleet emissions requirements coming into force in the EU in 2021.

China is also pushing for more electric vehicles through regulation, requiring carmakers to ensure 10 percent of their fleets are electrics in 2019. Regulations limit foreign brands to about 4 percent of the market, with Tesla owning half that. Other carmakers such as BMW, Ford and GM work with local partners.

Analysts James J. Albertine and Derek J. Glynn said they do not see competition as a threat to Tesla, “but a validation of electric vehicle technology that will grow the global electric vehicle demand pie, of which Tesla is likely to maintain a significant share.”