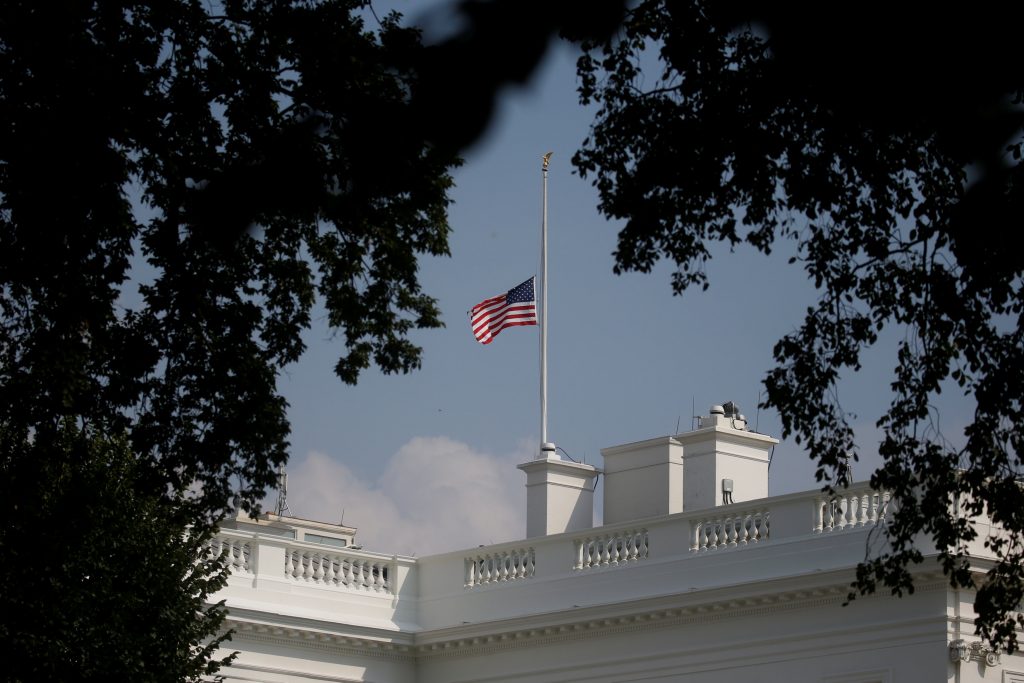 The White House again lowered its flags to half-staff Monday afternoon to honor the late Sen. John McCain, and President Donald Trump finally issued a statement regarding the senator – the latest in an ongoing tussle over how the administration deals with the death of a man who has harshly criticized, and been criticized by, President Trump.

“Despite our differences on policy and politics, I respect Senator John McCain’s service to our country,” the President said in a statement issued around 45 hours after McCain’s death. “In his honor, have signed a proclamation to fly the flag of the United States at half-staff until the day of his interment.”

Trump also said that he has asked Vice President Mike Pence “to offer an address at the ceremony honoring Senator McCain at the United States Capitol this Friday,” and that, “[a]t the request of the McCain family, I have also authorized military transportation of Senator McCain’s remains from Arizona to Washington, D.C., military pallbearers and band support, and a horse and caisson transport during the service at the United States Naval Academy.”

The Associated Press, citing two unnamed White House officials, had earlier reported that before McCain’s passing, his family had asked that Trump not attend the funeral.

The flags at the White House had been lowered on Sunday, but raised to full-staff Monday morning, before being lowered again Monday afternoon, around the time of Trump’s statement.

After McCain died Saturday, Trump tweeted condolences to his family but had no praise for McCain himself. The Washington Post reported Sunday that a White House statement praising McCain was nixed by Trump.

McCain was a frequent critic of  Trump on everything from his leadership style to his Russia policy. Trump questioned whether McCain’s having been a Vietnam POW qualifies him as a hero, saying, “I like people who weren’t captured,” and chafed at McCain’s decisive vote to kill the repeal of Obamacare.

Senate leaders of both parties had formally requested that American flags at government buildings remain at half-staff to honor McCain. That’s standard procedure when a member of the Senate passes away. McCain served in the chamber for six terms, most recently as chairman of the Armed Services Committee.

Additional reporting by The Associated Press.