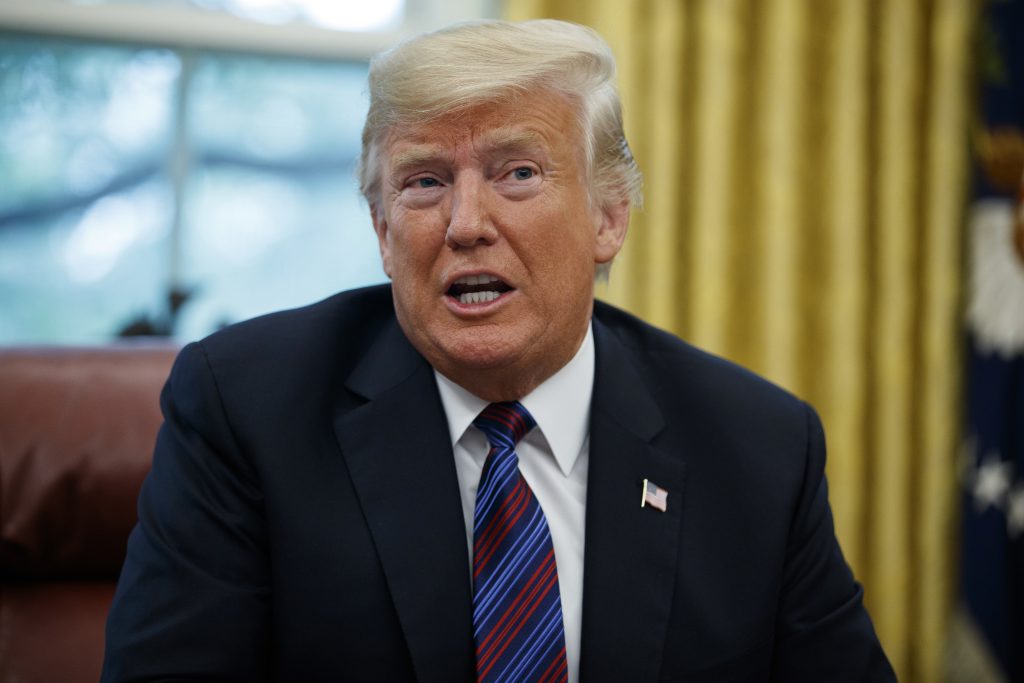 President Donald Trump nixed issuing a statement that praised the heroism and life of Sen. John McCain, telling senior aides he preferred to issue a tweet before posting one Saturday night that did not include any kind words for the late Arizona Republican.

Press secretary Sarah Huckabee Sanders, Chief of Staff John Kelly and other White House aides advocated for an official statement that gave the decorated Vietnam War POW plaudits for his military and Senate service and called him a “hero,” according to current and former White House aides, who spoke on the condition of anonymity to discuss sensitive internal deliberations. The original statement was drafted before McCain died Saturday, and Sanders and others edited a final version this weekend that was ready for the president, the aides said.

But President Trump told aides he wanted to post a brief tweet instead, and the statement praising McCain’s life was not released.

“My deepest sympathies and respect go out to the family of Senator John McCain. Our hearts and prayers are with you!” Trump posted Saturday evening shortly after McCain’s death was announced.

“It’s atrocious,” Mark Corallo, a former spokesman for Trump’s legal team and a longtime Republican strategist, said of Trump’s reaction to McCain’s death. “At a time like this, you would expect more of an American president when you’re talking about the passing of a true American hero.”

The break with precedent of previous presidents – who have typically released effusive official statements for noteworthy Americans upon their death – underscored the bitter relationship between the two men, Trump’s continued anger toward McCain, and the substantive and stylistic differences between them, people close to both men said.

“John McCain was a true American hero. He devoted his entire life to his country. His voice will be missed. Our respectful thoughts go to his beloved ones,” Macron posted on Twitter.

As tributes poured in, the president who said McCain was “not a war hero” spent much of Sunday at his golf course in Virginia and did not utter a word publicly. In the afternoon, he returned to the White House, where the flags were lowered to half-staff in honor of McCain.

Trump’s Twitter account was silent Sunday other than reprising screeds against the investigation into Russian election interference and boasting about a buoyant economy. “Fantastic numbers on consumer spending released on Friday!” Trump posted en route to the Virginia course Sunday morning. “Stock Market hits all time high!” Later Sunday, he accused the news media of giving Obama credit for his accomplishments, posting an excerpt of a weeks-old piece from the Washington Times.

McCain requested that Bush and Obama deliver eulogies at his funeral, while not inviting Trump. White House aides said it is unclear whether Trump will go to Capitol Hill, where McCain is to lie in state on Friday.

In abruptly seizing control of the Republican Party in 2016, Trump frequently denigrated McCain, who stood as an embodiment of the GOP for decades. Trump had repeatedly declined to say anything nice about McCain, leaving him out of a speech this month commemorating the signing of a defense-spending bill with the senator’s name on it.

Current and former White House aides said Trump continually said McCain was “not a friend” and was out to undermine the administration’s agenda, quarreling with other aides who were more supportive. He continued to believe that McCain was not a war hero, officials said, mirroring his controversial 2015 comment in Iowa when he attacked the Arizona senator for being captured and living in torturous conditions in Vietnam for almost six years.

“I like people that weren’t captured,” President Trump said.

The president was particularly frustrated last year when McCain strode to the floor of the Senate and voted thumbs-down on a bill that would have repealed the Affordable Care Act, driving a stake through the administration’s first big legislative priority. He has also complained to allies about McCain’s role in handing over a copy of a disputed dossier detailing allegations against him to the FBI after the 2016 election.

Trump told aides before McCain’s death that he should have stepped down from his seat as the senator battled cancer. Trump also told friends that he was betrayed by McCain, whom he felt he had supported politically.

“Initially, Donald liked McCain. Back in the 2008 election, he said to me that he thought the Republicans needed someone like McCain – something different,” said Chris Ruddy, a longtime Trump friend. “He said that he was a maverick who was doing different stuff.”

But McCain became one of the president’s sharpest critics, attacking him on foreign and domestic policy and disagreeing with his rhetoric, including Trump’s sharp attacks on the news media and his fight in 2016 with the Gold Star family of a dead soldier.

In July, after Trump held a friendly news conference with Russian President Vladimir Putin, McCain issued his sharpest rebuke yet. “The damage inflicted by President Trump’s naivete, egotism, false equivalence, and sympathy for autocrats is difficult to calculate. But it is clear that the summit in Helsinki was a tragic mistake,” McCain said.

The Arizona senator died at a time he saw as dark in the country’s history, said John Weaver, a former aide and a longtime friend. Weaver said McCain kept some of his worst opinions about Trump to himself.

For many, the contrast between the two men – and Trump’s reaction to McCain’s death – led to emotional and nostalgic remembrances of the senator, a hearkening to a different time. Weaver said there was a “clear juxtaposition” between the two.

Mark Hertling, a former senior military commander who lauded McCain on Twitter for visiting Mosul during heavy fighting in Iraq, said he was not surprised by Trump’s reaction to McCain’s death. Nineteen months into his presidency, Trump has yet to visit any war zones where American troops are fighting.

“It was very shallow,” Hertling said of Trump’s response.

McCain allies said they did not expect an outpouring of praise from Trump after their contentious past.

“It certainly doesn’t bother me or the people I know close to John,” Weaver said. “I don’t think it bothers John one bit. If we heard something today or tomorrow from Trump, we know it’d mean less than a degree from Trump University.”