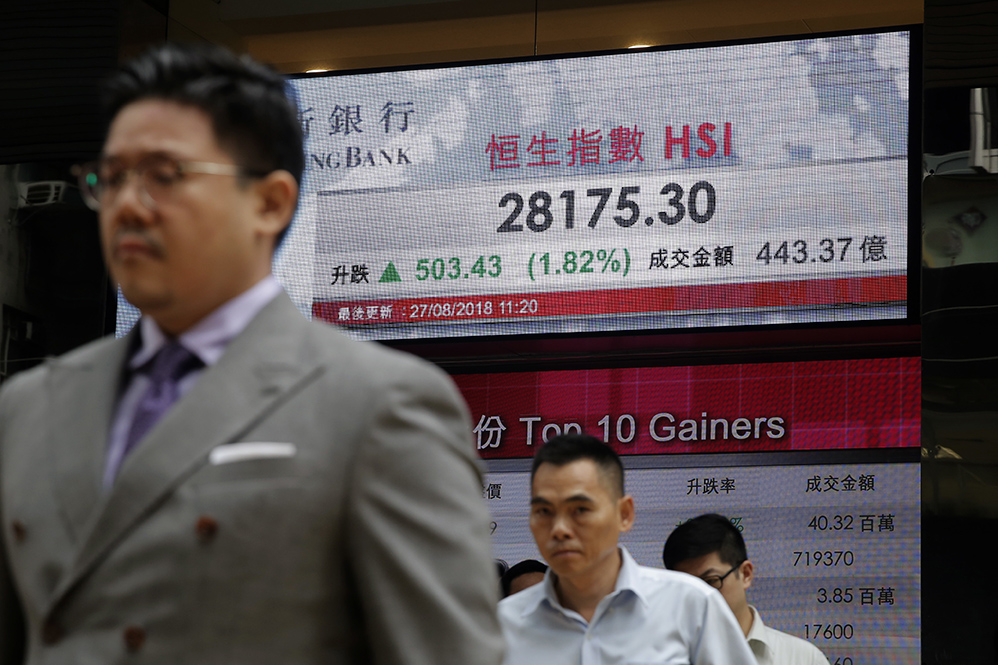 Major U.S. indexes finished higher on Friday, lifted by strong corporate earnings amid uncertainty from simmering trade tensions between the U.S. and China. The benchmark S&P 500 index closed at an all-time high, adding 0.6 percent to 2,874.69. It has now finished with a weekly gain in seven out of the last eight weeks. The Nasdaq composite and the Russell 2000 indexes also ended the day at all-time highs. The Nasdaq gained 0.9 percent to 7,945.98. The Russell 2000 index of smaller-company stocks picked up 0.5 percent to 1,725.67. The Dow Jones Industrial Average rose 0.5 percent, to 25,790.35.

U.S. Federal Reserve Chairman Jerome Powell sketched a positive picture of the U.S. economy on Friday and said the Fed’s incremental approach to raising rates has so far succeeded. “The economy is strong. Inflation is near our 2-percent objective, and most people who want a job are finding one. We are setting policy to do what monetary policy can do to support continued growth, a strong labor market and inflation near 2 percent,” Powell said, at an annual conference of central bankers in Jackson Hole, Wyoming.

The chairman’s measured tone about the economy and his message that the Fed plans to stick with a gradual pace of rate hikes appeared to sit well with investors. The Dow Jones industrial average closed up 133 points — about half a percentage point — and bond prices rose as well.

The United States and China have imposed 25 percent tariffs on $16 billion of each other’s goods including automobiles, factory equipment and other goods. On Thursday, U.S. and Chinese negotiators ended two days of meetings without breaking a deadlock over trade that has unnerved financial markets and disrupted global commerce. Lindsay Walters, a White House spokeswoman, said the delegations exchanged views on achieving a balanced economic relationship, without mentioning further talks. China’s Commerce Ministry said the talks were constructive and the sides would maintain contact, but didn’t give details.

“The lingering theme from last Friday had been the Jackson Hole symposium which was perceivably dovish, enthusing equity markets into the end of the week,” Jingyi Pan of IG said in a commentary. “Still, the watch lies with data as we head into the end of the month while keeping that keen eye on trade tensions after last week’s failed talks,” she added.

Benchmark U.S. crude added 5 cents to $68.77 a barrel in electronic trading on the New York Mercantile Exchange. The contract gained 1.3 percent to settle at $68.72 per barrel on Friday. Brent crude, used to price international oils, picked up 7 cents to $75.89 in London.