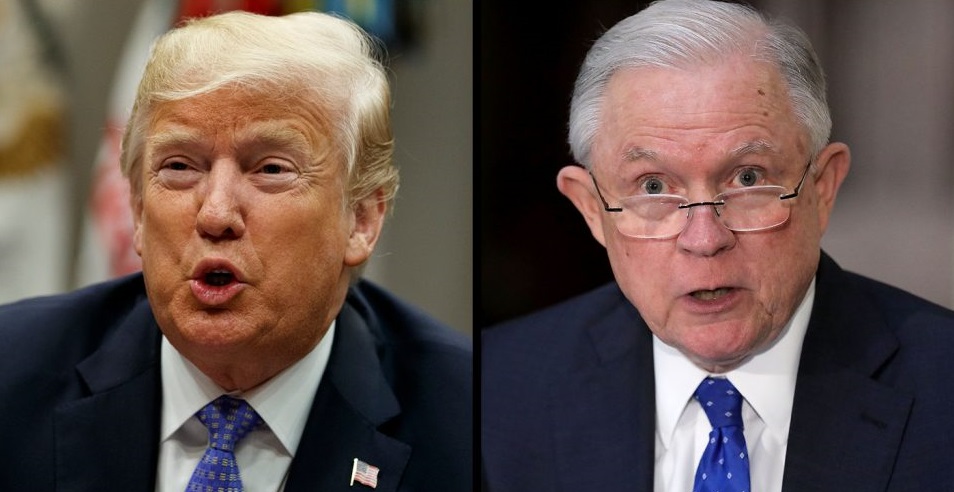 President Donald Trump has been warring with Jeff Sessions ever since the attorney general recused himself from the FBI investigation into Russian election-meddling, which has led to the mounting legal problems for Mr. Trump and his associates as special counsel Robert S. Mueller III investigates potential collusion.

Now, in the wake of last week’s guilty plea from Mr. Trump’s one-time personal lawyer Michael Cohen, the tax fraud conviction of former Trump campaign manager Paul Manafort and news that the Trump organization’s longtime chief financial officer may be cooperating with prosecutors, the president is stepping up his attacks against Mr. Sessions and appears to be laying the groundwork to fire the nation’s top law enforcement official.

Congressional Republicans, at one time solidified in their support for Mr. Sessions and strongly against his ouster, now look to be wavering — and that apparently has emboldened Mr. Trump to suggest he may soon take action.

In tweets Saturday morning, Mr. Trump again sought to distance himself from the Cohen case and implications that he did anything wrong, and he wrote: “Jeff Sessions said he wouldn’t allow politics to influence him only because he doesn’t understand what is happening underneath his command position. Highly conflicted Bob Mueller and his gang of 17 Angry Dems are having a field day as real corruption goes untouched. No Collusion!”

Mr. Trump then tweeted remarks made by Sen. Lindsey Graham (R-S.C.), on Friday when the senator was asked by Fox News about the acrimonious relations between Mr. Trump and Mr. Sessions: “Every President deserves an Attorney General they have confidence in. I believe every President has a right to their Cabinet, these are not lifetime appointments. You serve at the pleasure of the President.”

Moments later, Mr. Trump brought up his long-running complaint that Mr. Sessions and the FBI had not done a proper job of investigating the controversy over Hillary Clinton’s use of private emails while she was secretary of state. Referring to a Fox report on the email scandal, Mr. Trump tweeted: “Big story out that the FBI ignored tens of thousands of Crooked Hillary Emails, many of which are Really Bad. Also gave false election info. I feel sure that we will soon be getting to the bottom of all of this corruption. At some point I may have to get involved!”

Whether his comment that he may get personally involved was referring to Mr. Sessions wasn’t clear, but the latest tweets reflect the president’s swelling agitation at the continuing and widening probe by Mr. Mueller. And in citing Sen. Graham’s remarks, Pres. Trump may have concluded that he has enough political space to remove Mr. Sessions.

Mr. Trump has made clear he wants to shut down the special counsel investigation, or at least refocus it on his political enemies, and Sessions is his biggest obstacle right now. But such a move would have major legal and political repercussions, raising the prospect to obstruction of justice and further jeopardizing several vulnerable Republicans in the upcoming midterm elections.

Another high-ranking GOP senator, Charles E. Grassley of Iowa, who chairs the chamber’s Judiciary Committee, also has signaled openness to replacing the attorney general. And conservative activists like Rep. Dana Rohrabacher, the embattled California congressman, are joining media pundits on the right goading Mr. Trump on, accusing Mr. Sessions of disloyalty for refusing to shut down the Russia investigation.

Even so, a number of other Republican lawmakers, including the Senate GOP whip, John Cornyn of Texas, in recent days renewed their support for Sessions and essentially called on the president to back off.

Sen. Ben Sasse (R-Neb.), who sits on the Judiciary Committee, warned he will not vote to confirm the attorney general’s replacement should Mr. Sessions be fired for refusing “to act as a partisan hack.” The conservative group Republicans for the Rule of Law has been running ads mocking Trump’s oft-stated claim that Mr. Mueller’s probe is a “witch hunt,” and warning the president not to interfere with the special counsel’s work.

Democrats, meanwhile, are demanding Congress pass legislation to shield the special counsel investigation from being disbanded by Mr. Trump or his administration, even as Republican leaders balk on advancing it.

“While I have opposed many of the actions taken by Attorney General Sessions, it would be unacceptable for the president to fire him now in order to install someone willing to subvert the Mueller investigation,” Sen. Dianne Feinstein (D-Calif.), the top Democrat on the Judiciary Committee, said in a statement.

The Republicans have argued throughout the probe that they are confident Mr. Trump would not try to interfere with it, and thus, they said, legislation protecting Mr. Mueller was unnecessary. Now, the president has complicated matters for them.

For Mr. Graham, a senior senator who sits on the Judiciary Committee, it was only a year ago that he had warned Trump against firing Sessions.

But in reversing course last week, Mr. Graham said that while Mr. Sessions is a “fine man” and “has been a good attorney general,” his working relationship with President Trump was neither sustainable nor profitable for the nation.

The president is “entitled to an attorney general he has faith in,” he told reporters.

Mr. Sessions, for his part, earlier last week fired back at Trump’s criticisms. The former Alabama Republican senator and once one of Mr. Trump’s biggest supporters on Capitol Hill said that as long as he is attorney general, the Justice Department’s “actions will not be improperly influenced by political considerations. I demand the highest standards, and where they are not met, I take action.”

David M. Axelrod, a political consultant who was a top Obama adviser, said that for Mr. Sessions, the writing is on the wall — or in his case, Trump’s Saturday Twitter messages.

“One way or another, he’ll remove Sessions, relieve (Deputy Attorney General Rod) Rosenstein of control of Russia-related matters and try to strangle the Mueller probe and other actions he views as existential crises,” Axelrod tweeted.