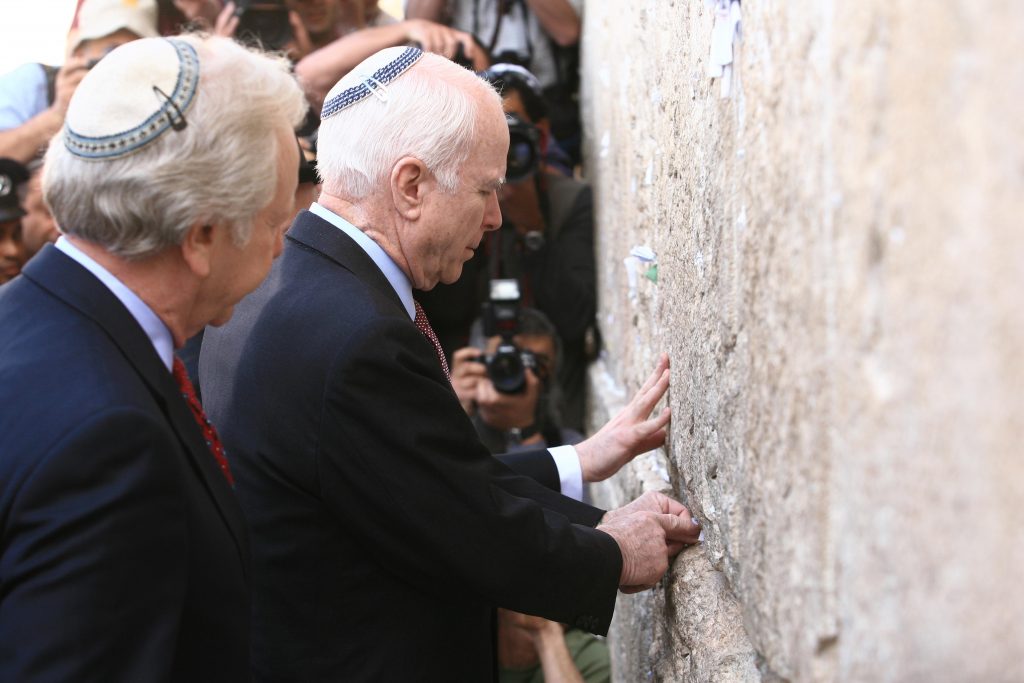 Israeli politicians eulogized Senator John McCain, who died on Saturday after suffering from brain cancer, as a friend of Israel who could be counted on to help the state when help was needed. “We pay a last tribute to Senator McCain as a man of great values takes his leave,” President Reuven Rivlin said upon hearing the news of McCain’s passing. “He was a fighter for his nation and a true friend of Israel.”

McCain was a frequent visitor to Israel who backed it in the Senate and strongly opposed the nuclear ambitions and terror of its archrival Iran.

Netanyahu added that McCain’s “support for Israel never wavered. It sprang from his belief in democracy and freedom.”

Justice Minister Ayelet Shaked said in a social media post that “McCain was one of Israel’s greatest friends. He was an American hero who refused freedom for himself as Vietnam prisoner of war until his comrades were released. He loved his country with all his being. He understood the struggles that Israel faces. During the 36 years he served in the House of Representatives and the Senate, Israeli governments always knew they had a friend.”

Education Minister Naftali Bennett said that “John McCain was an American patriot and a great friend of Israel. He supported the Jewish state, and we will never forget him.” Defense Minister Avigdor Liberman said that “Senator McCain was one of Israel’s great friends. He was an American hero who was taken prisoner of war in Vietnam. At one of our last meetings in Washington, he showed me a photo of the time when he was a POW, and told me that despite his suffering there, he never doubted his commitment to justice and freedom. We will all miss him.”

Yesh Atid head Yair Lapid called McCain “a true American patriot, and a true friend of Israel. He was an honest man in a world of politicians.” Zionist Camp MK Nachman Shai called McCain “an American hero who represented throughout his life American values. He has left us at a time when values are disintegrating and are sorely needed. Israel has lost one of its great friends in the Senate.”