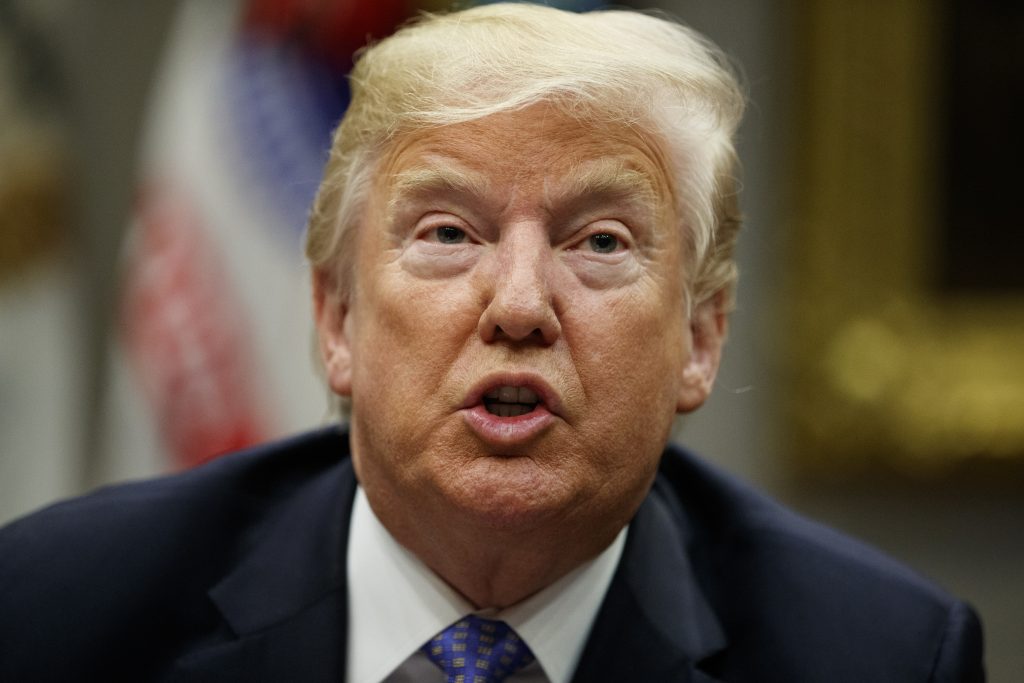 President Donald Trump pressed Attorney General Jeff Sessions on Friday to investigate his perceived enemies, as the long-running feud between the men continued.

Responding to Sessions’ declaration that he would not be influenced by politics, Trump tweeted that Sessions must “look into all of the corruption on the ‘other side,’ ” adding: “Come on Jeff, you can do it, the country is waiting!”

The president’s tweets marked the second day of a highly public smackdown by Trump of his attorney general — the latest in a dispute that has simmered since Sessions recused himself from overseeing the Russia investigation.

Earlier this week, Trump, rattled by the legal downfall of two former advisers, accused Sessions of failing to take control of the Justice Department. Sessions punched back Thursday, saying that he and his department “will not be improperly influenced by political considerations.”

Trump’s anger with Sessions boiled over in an interview with Fox News in which the president also expressed frustration with the plea agreement his one-time legal fixer Michael Cohen cut with prosecutors, implicating Trump in a crime that Cohen admitted. Trump said it might be better if “flipping” — cooperating with prosecutors in exchange for more favorable treatment— were illegal because people cooperating with the government “just make up lies” to get a break from prosecutors.

Some of the issues Trump raised with Sessions on Friday have either already been examined or are in the process of being investigated.

He cited two former FBI officials, Peter Strzok and Lisa Page, who were sharply criticized in a Justice Department inspector general report in June for trading derogatory text messages about Trump. Strzok, who was removed from special counsel Robert Mueller’s investigation in the summer once the texts were brought to his attention, was fired by the FBI this month. Page has resigned from the bureau.

Trump also mentioned the Russia probe. The inspector general is also investigating potential abuses in the early stages of the FBI’s investigation into possible coordination between Russia and the Trump campaign. Trump and other Republicans have complained that the political opposition research used to support a wiretap application on a Trump associate was paid for by Democrats, something the inspector general is expected to look at.

Trump also addressed the five-year sentence given to a former government contractor convicted of mailing a classified U.S. report to a news organization.

Trump tweeted Friday that that is “small potatoes” compared with “what Hillary Clinton did.” Prosecutors are calling that sentence handed down to 26-year-old Reality Winner the longest imposed for a federal crime involving leaks to the media.

Earlier he defended himself on Fox News against talk of impeachment — “the market would crash … everybody would be very poor” — tried to dissociate himself from Cohen and said anew that he hadn’t known in advance about Cohen’s payments to silence damaging information on Trump.

Trump has spent more than a year publicly and privately venting over Sessions’ decision to recuse himself from the federal Russia-collusion investigation because he’d worked on Trump’s campaign. Trump, who blames that decision for the eventual appointment of special counsel Robert Mueller, told Fox News that Sessions “never took control of the Justice Department and it’s a sort of an incredible thing.”

“What kind of man is this?” Trump asked.

“You know the only reason I gave him the job? Because I felt loyalty, he was an original supporter,” Trump said of Sessions, an Alabama Republican who was the first senator to endorse Trump’s bid.

Sessions has made clear to associates that he has no intention of leaving his job voluntarily despite Trump’s constant criticism. But his tone in his statement on Thursday made clear he is tired of the president’s attacks.

“I took control of the Department of Justice the day I was sworn in, which is why we have had unprecedented success at effectuating the President’s agenda,” he said. He said that while he’s attorney general the department “will not be improperly influenced by political considerations. I demand the highest standards, and where they are not met, I take action.”

In New York, meanwhile, it was reported that federal prosecutors have granted immunity to the publisher of a magazine that bought and killed damaging information on Trump. And people familiar with the situation told The Associated Press that the publication kept a safe containing documents on damaging stories it killed as part of its cozy relationship with Trump leading to the 2016 election.

Allies, including Republican members of Congress, have long advised Trump that firing Sessions — especially before the midterm elections — would be deeply damaging to the party.

But Sen. Lindsey Graham of South Carolina, who in March said firing Sessions would “blow up” the Judiciary Committee, has been shifting his tone.

“I think there will come a time, sooner rather than later, where it will be time to have a new face and a fresh voice at the Department of Justice,” he told reporters on Thursday. “Clearly, Attorney General Jeff Sessions doesn’t have the confidence of the president.”

Others stood by Sessions.