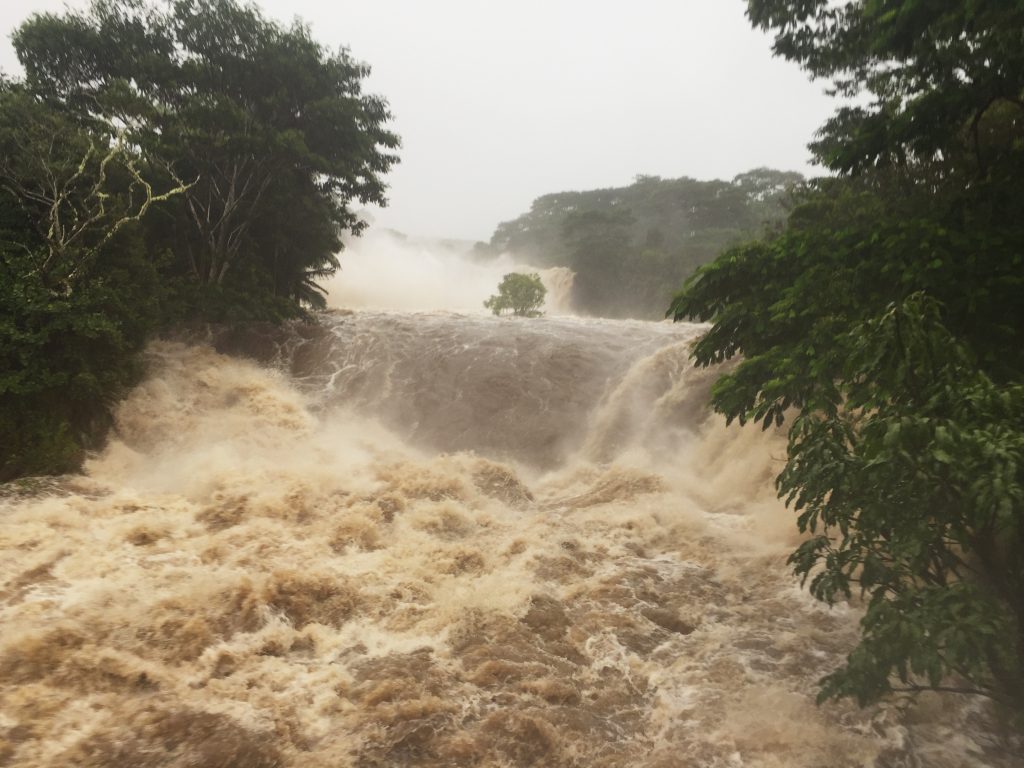 Emergency crews rescued five California tourists from a home they were renting in Hilo after a nearby gulch overflowed and flooded the house, Thursday.

Suzanne Demerais said a tiny waterfall and small stream flowed near the home when she first arrived with four of her friends from the Los Angeles area. But the stream turned into a torrent and the river rose rapidly over 24 hours. Hawaii County firefighters, who were in touch with the home’s owner, decided to evacuate the group before the water rose further. They floated the five out on their backs, Demerais said.

“It was quite an experience because we weren’t planning to have a hurricane during our vacation time,” Demerais said.

Hurricane Lane, which was still offshore, lashed the Big Island with nearly 20 inches (50.8 cm) of rain in about 24 hours. It was packing maximum sustained winds of 120 mph (193 kph), making it a Category 3 hurricane.

Forecasters say it will move close to or over portions of Hawaii’s main islands early Friday, bringing dangerous surf of 20 feet (6 meters).

Lane was not projected to make a direct hit on the islands, but officials warned that even a lesser blow could do significant harm. Some areas could see up to 30 inches of rain.

United Airlines canceled its Friday flights to and from Maui. The airline added two additional flights from Honolulu to San Francisco on Thursday to help transport people off the islands.

Hawaiian Airlines canceled all Friday flights by its commuter carrier, Ohana by Hawaiian.

Hawaii’s biggest hotels are confident they can keep their guests safe as long as they stay inside, said Mufi Hannemann, CEO of Hawaii Tourism and Lodging Association.

“The only concern is those that venture outside of the properties, that would like to hike on a day like this or who would like to still go into the ocean and see what it’s like to take a swim or surf in these kind of waters,” Hannemann said.

Shelters were open throughout the islands, with 350 people in them in Oahu. Aid agencies were also working to help Hawaii’s sizable homeless population, many of whom live near beaches and streams that could flood.

The National Weather Service downgraded the Big Island to a tropical storm warning, meaning it expects sustained winds of 39 mph to 73 mph on the island instead of stronger hurricane force winds.

But a hurricane warning remains in effect for Oahu and Maui County.

The central Pacific gets fewer hurricanes than other regions, with about only four or five named storms a year. Hawaii rarely gets hit. The last major storm to hit was Iniki in 1992. Others have come close in recent years.

Because people in Hawaii are confined to the islands, they have to make sure they have enough supplies to outlast power outages and other potential emergencies.

The Federal Emergency Management Agency moved several barges packed with food, water, generators and other supplies into the region ahead of Hurricane Hector, which skirted past the islands more than a week ago, FEMA Administrator Brock Long said.