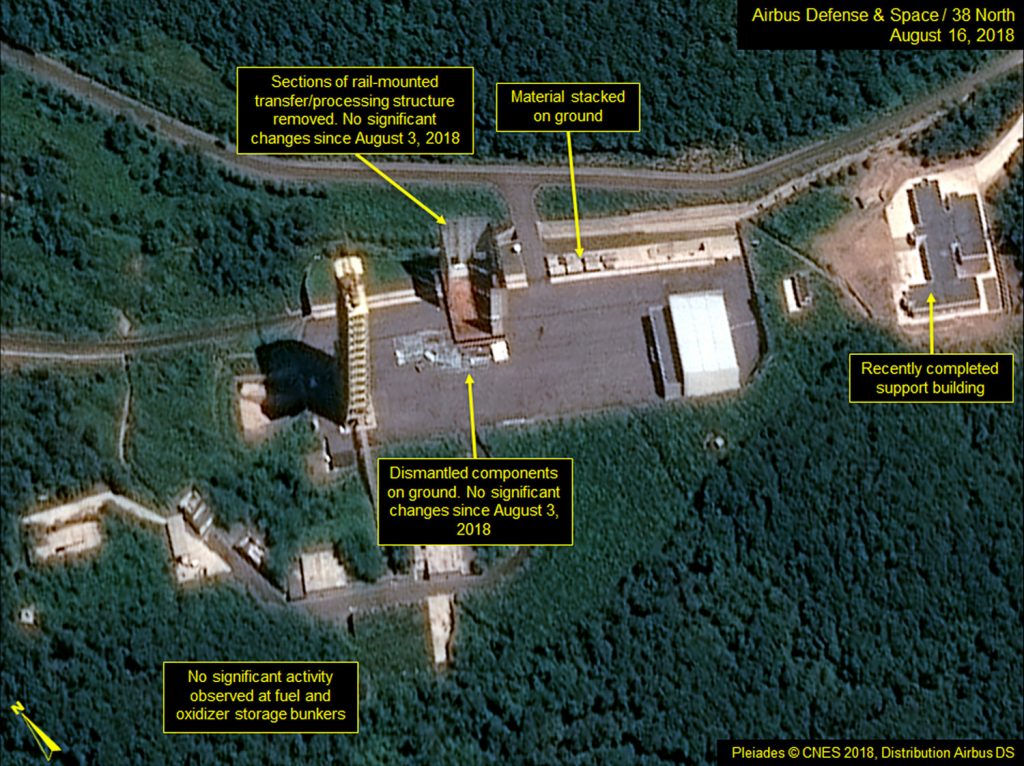 Satellite photos from last week indicate North Korea halted work to dismantle a missile engine test site in the first part of August, in spite of a promise to President Donald Trump at a June summit, a Washington think tank reported on Wednesday.

The 38 North project said commercial satellite imagery of the Sohae Satellite Launching Station taken on Aug. 16 indicated “no significant dismantlement activity” at either the site’s engine test stand or launch pad since Aug. 3.

U.S. Secretary of State Mike Pompeo said last month that reports that North Korea had started dismantling facilities at Sohae were consistent with a commitment North Korean leader Kim Jong Un made at a summit with Trump in Singapore on June 12.

The 38 North report said significant progress in tearing down the test stand had been made from July to early August, but added: “The components previously removed remain stacked on the ground.”

It said work to take down a rail-mounted transfer/processing building at the launch pad also appeared to have stalled and it was not clear if the work that had taken place on that was associated with dismantling or modification of the structure.

The 38 North report comes at a time of widespread doubts about North Korea’s willingness to go along with U.S. demands for it to give up its nuclear weapons.

There was no immediate comment from the White House.

The U.N. nuclear watchdog, the International Atomic Energy Agency (IAEA), said in a report on Monday that it had not found any indication that North Korea had stopped its nuclear activities.

In Singapore, Kim agreed in broad terms to work toward denuclearization of the Korean peninsula but he has given no sign he is willing to give up his arsenal unilaterally.

In an interview with Reuters on Monday, Trump defended his efforts to convince Pyongyang to give up its nuclear weapons, saying he believed North Korea had taken specific steps toward denuclearization. He said he would “most likely” meet again with Kim.

However, several members of the U.S. negotiating team said they had seen no progress toward denuclearization and no sign that North Korea was prepared to negotiate seriously until the United States promised relief from sanctions in return.

North Korea state media last week blamed lack of progress in talks since the summit on members of the U.S. negotiating team and said breaking the deadlock would demand “a bold decision on the part of President Trump.”

A commentary in its Rodong Sinmun newspaper on Saturday said those opposed to dialogue were seeking to derail talks by making baseless references to “secret nuclear facilities” in North Korea.

U.S. officials have been trying to persuade North Korea to declare the extent of its weapons programs, something Pyongyang had always refused to do in past failed rounds of talks.

Trump’s national security adviser, John Bolton, said this month that Pyongyang had not taken the necessary steps to denuclearize, while U.S. Ambassador to the United Nations Nikki Haley said Washington was “not willing to wait for too long.”

Bolton said Trump, in a letter to Kim, had proposed sending Pompeo back to North Korea for what would be his fourth visit this year and that the president was ready to meet with Kim again at any time.