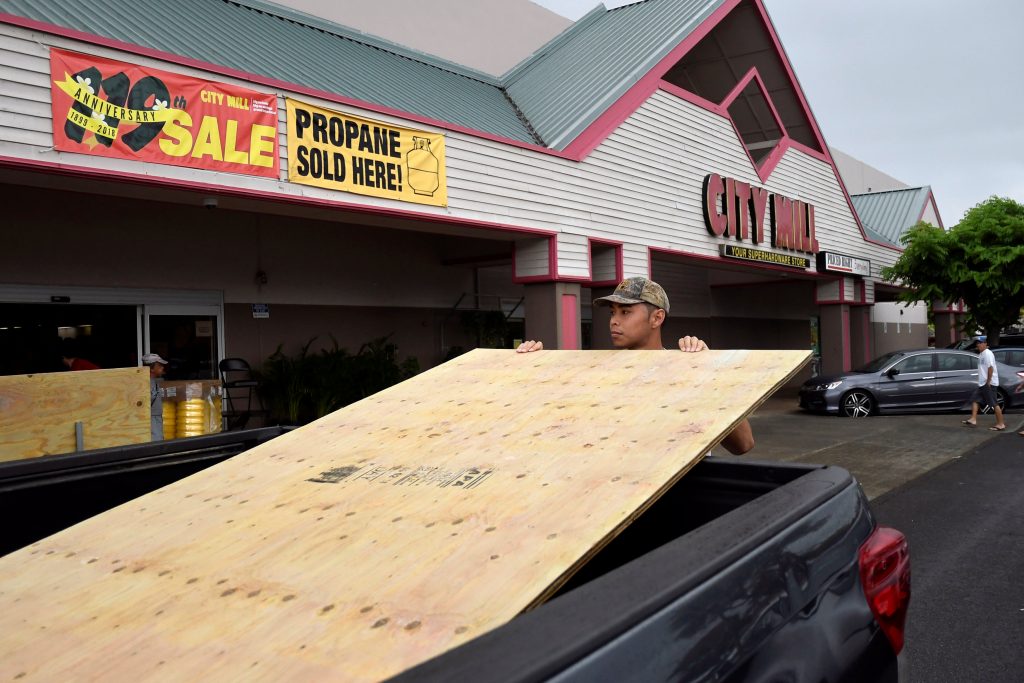 Hurricane Lane, threatening a direct hit as Hawaii’s worst storm in a quarter century, on Thursday churned toward Oahu, the island with the largest population, as schools, government offices and business closed and residents stocked up on supplies and boarded up homes.

Packing sustained winds of up to 130 miles per hour, Lane could dump as much as 20 inches of rain, triggering flash floods and landslides, the National Weather Service said.

“Preparations to protect life and property should be rushed to completion,” the National Weather Service’s Central Pacific Hurricane Center in Honolulu said in its latest advisory.

As of early Thursday, Lane was centered about 230 miles south-southwest of Kailua-Kona, a town on the west coast of the Big Island, the NWS said. It was classified as a powerful Category 4 storm on the five-step Saffir-Simpson scale of hurricane strength.

The NWS said the storm weakened slightly overnight but excessive rainfall would affect the Hawaiian islands into the weekend, “leading to significant and life-threatening flash flooding and landslides.”

The center also warned of “very large and damaging surf” along exposed west- and south-facing shorelines.

A hurricane warning was in effect for Oahu, Maui County and Hawaii County. The islands of Kauai and Niihau remained on hurricane watch and could face similar conditions starting Friday morning.

Governor David Ige urged residents to take the threat seriously and prepare for the worst by setting aside a 14-day supply of water, food and medicines.

All public schools, University of Hawaii campuses and nonessential government offices on the islands of Oahu and Kauai will be closed for at least two days starting on Thursday, Ige said Wednesday.

Long lines of cars formed at gasoline stations in Honolulu and people pulled small boats from the water ahead of the expected storm surge. U.S. Navy ships and submarines based in Hawaii were instructed to leave port, a common practice when a hurricane approaches to avoid damage.

The most powerful hurricane on record to hit Hawaii was Category 4 Iniki, which made landfall on Kauai island on Sept. 11, 1992, according to the National Oceanic and Atmospheric Administration. It killed six people and damaged or destroyed more than 14,000 homes.