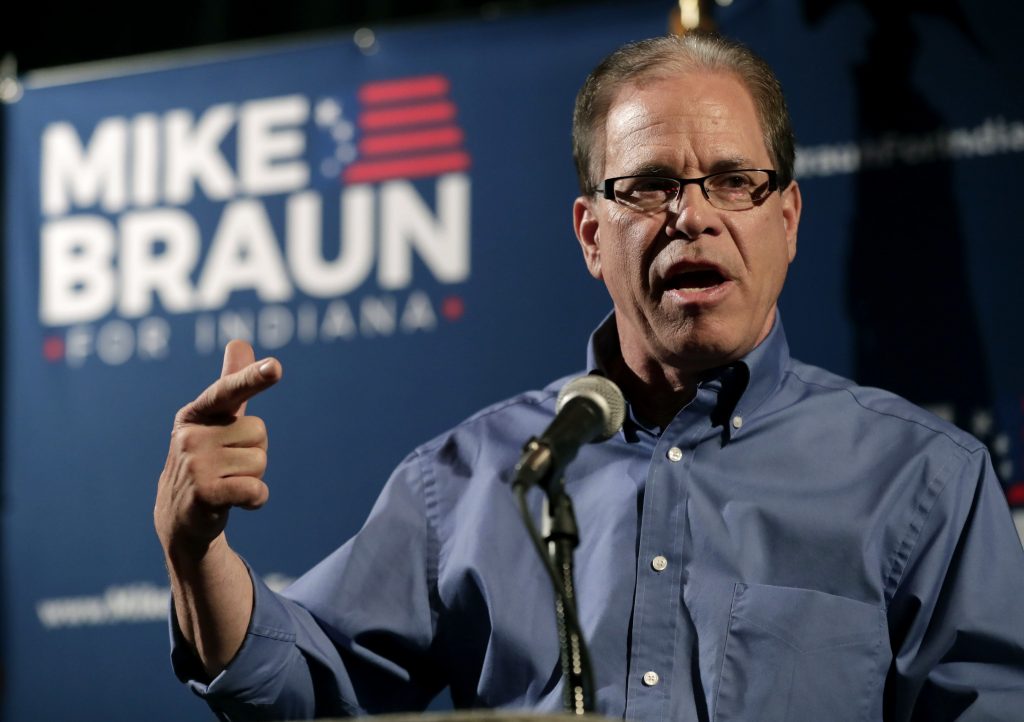 Layoffs came in waves at Westin Automotive’s Minnesota plant as production shifted to low-wage factories in Asia, ultimately pushing more than 200 U.S. workers — many over age 50 — out of once-reliable jobs.

Despite the move a decade ago, Westin remains a chief supplier of auto parts sold under a brand trademarked by Indiana Senate candidate Mike Braun. Those ties put the Republican in a delicate spot as President Donald Trump vilifies China and other foreign competitors, riling up the GOP base.

President Trump’s election in 2016 shifted the political dynamic for Republican business people like Braun seeking public office. Many used to actively downplay the effects of outsourcing or even embrace it, even as socially conservative blue-collar workers in Indiana and other manufacturing-heavy states flocked to the party.

Wisconsin Sen. Ron Johnson, who ran a plastics manufacturing company, proclaimed in 2014 that outsourcing was “quite beneficial” to America. Georgia Sen. David Perdue, who ran aggressively as a job creator, said he was “proud” to have spent much of his career outsourcing. And GOP presidential nominee Mitt Romney, who invested in companies that offshored jobs, said his business record is what qualified him for the presidency.

Braun, however, is taking a different approach.

Until recently, the multimillionaire ignored questions about his outsourcing practices. Instead he ran ads stating his business empire was “made in America”, while attacking his Democratic rival, Sen. Joe Donnelly, for once owning stock in a family business, run by Donnelly’s brother, that operates a factory in Mexico and sources goods from China.

While Braun’s campaign won’t say how much of his own parts line is made abroad, spokesman Josh Kelley acknowledged in an interview Thursday that Braun uses foreign-made products to stay competitive.

“He’s seen suppliers that used to make 100 percent of their products here in the U.S. and, thanks to unfair trade deals coming down from politicians in D.C., we’ve seen these jobs and products being forced overseas,” Kelley said.

It’s a justification they are unwilling to extend to Donnelly, whom Braun accuses of being complicit in sending “jobs to Mexico and China.”

Yet earlier this month, the AP reported that much of Braun’s Promaxx brand is made in China.

Records reviewed since then show that Braun has a particularly close relationship with Westin Automotive, which outsourced work formerly done at its St. James, Minnesota, plant, to China and Taiwan between 2007 and 2008.

Braun has worked with Westin since at least 2008, the same year he launched Promaxx. That year, an auto parts distribution company he owns, Meyer Distributing, featured Westin in its catalog.

Since then, Westin — a major supplier of Promaxx-brand running boards, bumpers, brush guards and truck racks — has received more than 700 shipments of the same kind of products from China, including several shipments delivered directly to one of Braun’s warehouses, records show.

Meanwhile, the Department of Labor found the laid-off workers in Minnesota — many of whom did not have easily adapted skills — faced dire circumstances.

“A significant number of workers at the firm are age 50 or over and possess skills that are not easily transferable,” a federal investigator concluded. “Competitive conditions within the industry are adverse.”

While Republicans running for office, particularly business people, have sometimes struggled with outsourcing questions, it appeared that the GOP cracked the code this year with Donnelly.

That came after it was revealed that Donnelly, a longtime outsourcing critic, abruptly sold his stock in the family company amid news reports on its Mexican factory.

Republicans hammered Donnelly and even hired a mariachi band to troll him at his re-election kickoff. Then Braun surged in May’s GOP primary, beating Reps. Luke Messer and Todd Rokita, muddying what had been a clean line of attack.

Kelley argued that Braun’s business doesn’t actually make the parts sold under his brand, whereas Donnelly’s brother’s company does.

“He could have easily addressed (the factory) at the family dinner table with his brother, but instead he waited until he was exposed by the press as a hypocrite,” Kelley said.

But as recently as 2015, Braun belonged to an economic development group that sought to “increase the public’s understanding of the positive impact of global trade.”

In Indiana, the issue has been particularly resonant.

During the 2016 campaign, Trump made the plight of Carrier Corp. factory workers in Indianapolis a cause célèbre after company officials were captured in a viral video telling employees the plant would shut down and shift production to Mexico.

That secured Trump votes from many factory workers on his way to a 19-point victory in the state, said Chuck Jones, the recently retired president of United Steel Workers Local 1999. In Braun, Jones says he sees someone like President Trump who is “just telling people what they want to hear.”

“People were looking for somebody who might give them a ray of hope,” said Jones, who is a Democrat. “Some of these politicians, even though they were free-traders, like Mike Braun, they said, ‘Huh, it worked for Donald Trump, maybe it will work for me?'”