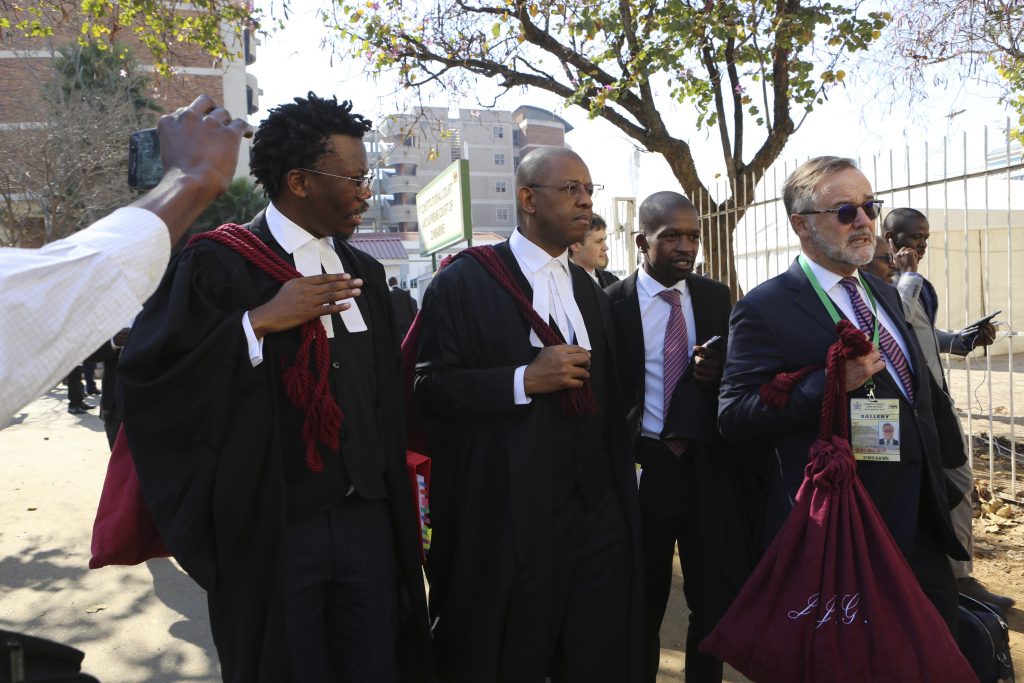 Zimbabwe’s capital was under tight security as the Constitutional Court on Wednesday heard the main opposition party’s challenge to the results of last month’s presidential election, the first without longtime leader Robert Mugabe on the ballot. The chief justice said the ruling would be announced Friday at 2 p.m.

Police barricaded streets in Harare amid high tensions over the case which will decide if the victory of President Emmerson Mnangagwa, a former Mugabe enforcer, is valid. The opposition claims “gross mathematical errors” and seeks a fresh election or a declaration that its candidate, Nelson Chamisa, won.

Many hoped the peaceful vote on July 30 would launch a new era for Zimbabwe after Mugabe stepped down in November under military pressure, but two days later six people were killed when troops swept into the capital to disperse opposition protesters.

The opposition claims the electoral commission bumped up Mnangagwa’s figures through double counts and the creation of “ghost” polling stations. It also alleges that some polling stations recorded more voters than those registered.

“It’s like a kid was playing with the figures,” a lawyer for the opposition, Thabani Mpofu, told the court. He alleged that 16 polling stations had identical results.

Mpofu also said the electoral commission had produced three sets of presidential results, including one in court papers where the commission revised Mnangagwa’s win down to 50.67 percent. The commission attributed that to an “error” but argued it was not significant enough to invalidate the win.

Mpofu said Chamisa could have lost more than 69,000 votes in all, well over the 31,000 that allowed Mnangagwa to avoid a runoff.

Chief Justice Luke Malaba, however, pressed the opposition for the original election results forms to back up their allegations: “We cannot act on generalities.”

A lawyer for the electoral commission, Tawanda Kanengoni, said the opposition should have asked to open ballot boxes but had failed to do so, adding that “we don’t know where they get their data.”

The lawyer for Mnangagwa, Lewis Uriri, agreed: “The mere making of bold allegations does not make and cannot threaten an election.”

Mnangagwa and the electoral commission argued the opposition’s application should be dismissed on a technicality, saying it was filed too late and that papers were not properly served on respondents.

The case was broadcast live by the state broadcaster, the Zimbabwe Broadcasting Corporation, but the courts ruled the proceedings could not be livestreamed on social media beyond state media. Journalists and others accredited by the court, including the opposition’s lawyers, were not permitted to carry mobile phones or laptops.

According to Veritas, a legal think tank, the court can declare a winner or invalidate the election and call for a fresh vote or make any other order it considers “just and appropriate.”

If the court upholds Mnangagwa’s win, the inauguration would take place within 48 hours.

This is not the first time the opposition has challenged election results in court. Following the 2013 presidential vote, then-main opposition leader Morgan Tsvangirai filed a challenge but then withdrew it, claiming he would not get a fair hearing. The court declined his withdrawal and ruled in favor of Mugabe.