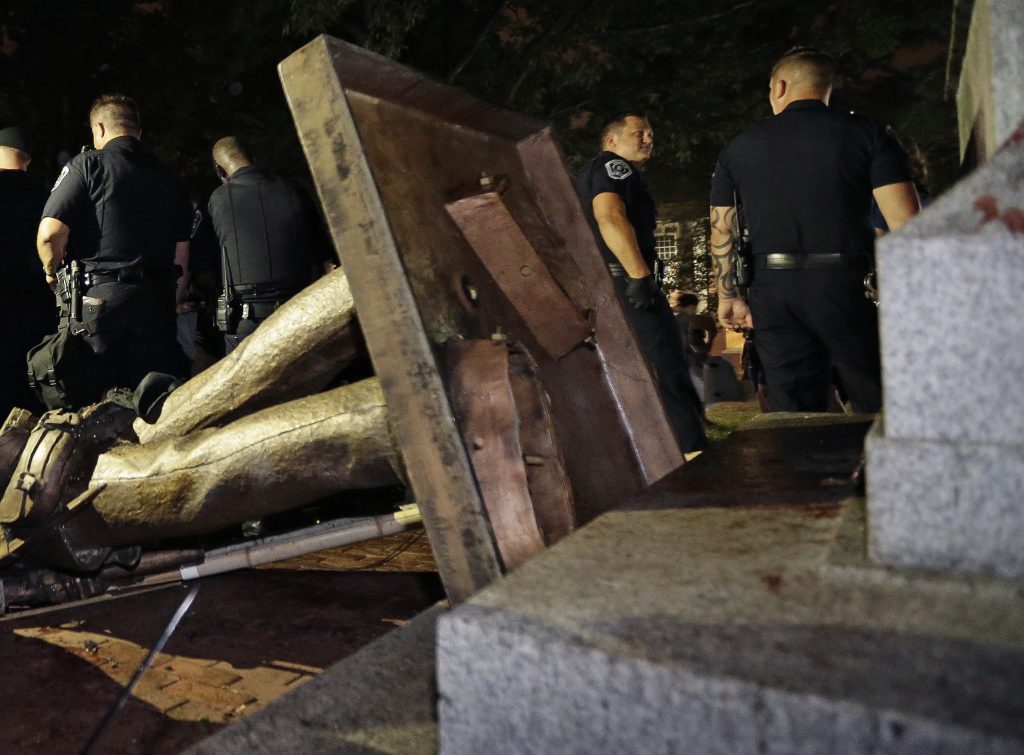 A crowd toppled a Confederate statue at the University of North Carolina on Monday night, with cheers and smoke bombs filling the air.

The monument – called Silent Sam – had long been a target of students and others, a symbol of a once-honored past that many wanted to demolish. This spring, a graduate student splashed a mixture of ink and her own blood on the statue. On the night before classes began this year, a crowd gathered to demonstrate at the statue and, using ropes, pulled it down.

The scene was loud and tense, said Heather Redding, a community activist who has supported the students’ efforts. When two members of a local group that defends Confederate monuments angrily confronted her, someone stepped between them to give her space.

She was worried the situation would turn violent. But she said police stood aside when the crowd moved in toward the statue, which they had covered with large banners, chanting, “Take it down!”

“As it came crashing down it just hit me – this was it,” Redding said. “This was the moment the students worked so hard for.”

The student newspaper, the Daily Tar Heel, and others covered the gathering protest on social media, and the elation once the monument was taken down:

Across the country, people have debated whether Confederate monuments are symbols of a racist past that must be removed, or if efforts to tear them down amount to whitewashing history. Those arguments turned deadly a year ago in Virginia, when white supremacists and others rallied to oppose the removal of a statue of Gen. Robert E. Lee from a Charlottesville park.

In the days that followed, monuments elsewhere in the country toppled or were vandalized, including a bronze Confederate statue in Durham, North Carolina, two statues in Wilmington, North Carolina, and another in Knoxville, Tennessee. In Baltimore, Los Angeles and San Diego last summer, city officials removed Confederate monuments and a plaque. At the time, President Trump tweeted that removing “beautiful statues and monuments” was “so foolish.”

In Chapel Hill, North Carolina, the bronze and marble “Silent Sam” monument was commissioned by the Daughters of the Confederacy and erected in 1913 to honor UNC alumni who died for the Confederacy.

It is known as “Silent Sam” because the soldier holds a gun but no ammunition. A panel on the side shows a woman, symbolizing the state, urging a student to drop his books to take up arms for the fight.

In 2005, the state’s flagship public university added a sculpture nearby honoring enslaved African Americans. But the first statue has continued to be polarizing. In 2015, someone painted “KKK” and “MURDERER” on it. After the violence following a white-supremacist rally in Charlottesville last year, hundreds of people in North Carolina chanted, “Take it down!”

Over the years, university officials had acknowledged that the statue elicited strong feelings, but said they didn’t have the unilateral authority to remove the historical monument.

On Monday night, university officials said that a group from among an estimated crowd of 250 protesters brought down the Confederate monument. “Tonight’s actions were dangerous, and we are very fortunate that no one was injured. We are investigating the vandalism and assessing the full extent of the damage. ”

North Carolina’s governor, Roy Cooper, wrote on Twitter that he had been in contact with law enforcement and university officials about the rally and appreciated their efforts to keep people safe. “The Governor understands that many people are frustrated by the pace of change and he shares their frustration,” he wrote, “but violent destruction of public property has no place in our communities.”

Many welcomed the action.

“This is more than just a statue or a memorial,” Redding said. “Silent Sam is a piece of lost-cause propaganda.” She said the statue doesn’t honor UNC’s sons who died in the war but is a symbol of a “white-supremacist group co-opting public space at a public university.”

It was inevitable it would come down, Redding said.

Others were dismayed, writing on social media that statues of all the country’s Founding Fathers would be the next targets of politically correct mobs.

“There is no place for the destruction of property on our college campuses or in any North Carolina community,” North Carolina House Speaker Tim Moore, a Republican, said in a statement Tuesday. “The perpetrators should be arrested and prosecuted by public safety officials to make clear that mob rule and acts of violence will not be tolerated in our state.”

Carol Folt, chancellor of the university, sent a message to the campus overnight. “The monument has been divisive for years, and its presence has been a source of frustration for many people not only on our campus but throughout the community,” she wrote. “However, last night’s actions were unlawful and dangerous, and we are very fortunate that no one was injured.” She said she appreciated the actions of police in keeping people safe and said they are “investigating the vandalism and assessing the full extent of the damage.”

A group that has fought to remove the statue questioned her reaction.

Hampton Dellinger, a former North Carolina deputy attorney general who helped UNC students by writing to university and system leaders about legal issues last year, said Tuesday morning, “Whether there will be any legal consequences for those involved in the toppling remains unclear, but I’m certain that Silent Sam stood illegally.”

“Because Silent Sam violates the rights guaranteed by federal laws – particularly the right to pursue studies on a campus without a racially hostile learning environment – UNC officials were duty-bound to remove it,” he said. “They failed to do their duty, and that’s a shame.”

“It is hard to imagine in 2018 that an institution of higher learning would stoop so low as to host a Civil War monument in the middle of campus featuring a towering Confederate soldier with his rifle raised and his finger on the trigger. But that’s exactly what UNC was doing. It was not only wrong, it violated controlling federal law.”

Altha Cravey, an associate professor at UNC who has been involved with the effort to move the statue, said: “Our campus looks a lot better now that the monument to white supremacy has been taken down from its pedestal. It was a joyful celebratory evening and rain started pouring after Silent Sam fell as if to cleanse and renew the campus.”