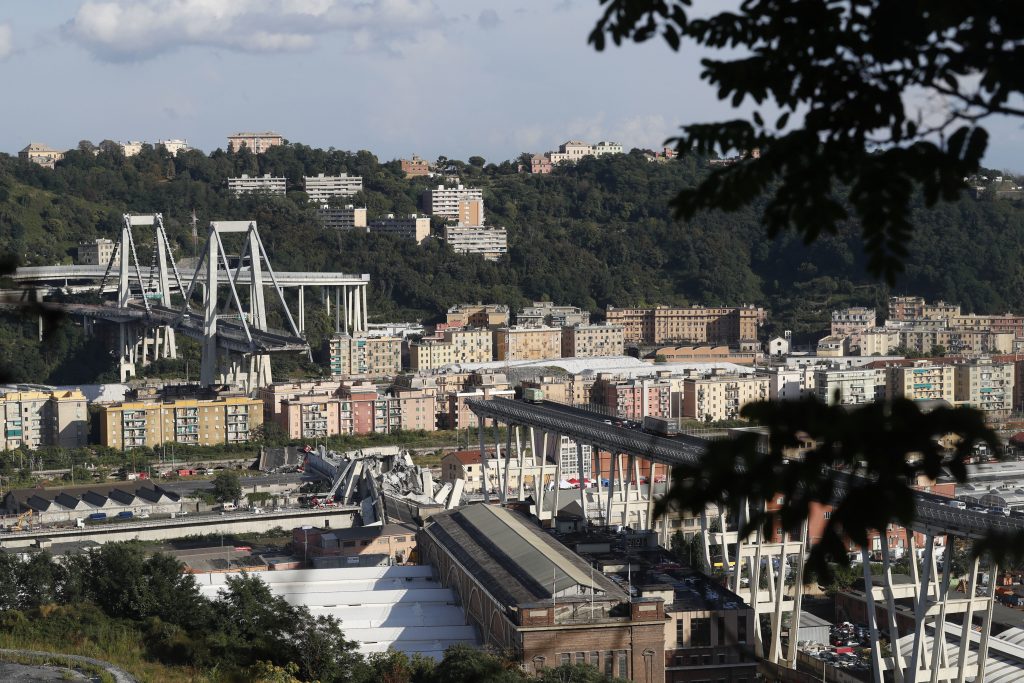 Engineering experts determined in February that corrosion of the metal cables supporting the Genoa highway bridge had reduced the bridge’s strength by 20 percent — a finding that came months before it collapsed last week, an Italian news magazine reported Monday.

Despite the findings, Espresso wrote that “neither the Ministry, nor the highway company, ever considered it necessary to limit traffic, divert heavy trucks, reduce the roadway from two to one lanes or reduce the speed” of vehicles on the key artery for the northern port city.

A large section of the Morandi bridge collapsed Aug. 14 during a heavy downpour, killing 43 people and forcing the evacuation of more than 600 people living in apartment buildings beneath another section of the bridge. Prosecutors are focusing their investigation into the cause of the bridge’s collapse on possible faulty maintenance or design flaws but have not identified any targets.

After workers heard creaking noises coming from the part of the bridge that was still standing, firefighters suspended an operation to allow evacuated residents to retrieve their belongings from apartments under the bridge.

The Italian news agency ANSA reported that officials have ruled out that the sound could be caused by wind, and that more checks are underway.

Firefighters on the ground confirmed the reports but declined to be identified as they were not authorized to speak to the media. Work continued to clear the tons of bridge debris that cascaded onto a dry riverbed below.

In its report, Espresso cited the minutes of a meeting of the Genoa public works superintendent, which included Roberto Ferrazza, an architect named to head a government commission looking into the disaster, and Antonio Brencich, an engineer who has been outspoken about the bridge’s flaws.

Former Transport Minister Graziano Delrio told a news conference Monday that “no one ever signaled the necessity of limiting traffic” on the bridge.

Espresso reporter Fabrizio Gatti told SKY TG24 that a reduction of 20 percent strength would not be significant in a modern bridge, but on a structure with the known defects of the Morandi bridge it should have merited swifter, more decisive action.

“Everyone was well aware of the situation on that bridge,” Gatti said.

Bidding on a 20-million-euro ($22.8-million) contract to reinforce two of the major supports for the bridge, including one that collapsed, was scheduled to close next month.

The Italian government, meanwhile, appeared divided on how to proceed in relation to Autostrade per l’Italia, the company that operated the section of highway that collapsed.

Transport and Infrastructure Minister Danilo Toninelli was quoted by the Milan daily Corriere della Sera as saying that he supported the nationalization of Italy’s toll highways, including the bridge.

“Think of all the revenues that would return to the government through tolls, to use not to donate to shareholders’ dividends but to reinforce the quality of service and security on our roadways,” Toninelli was quoted as saying.

But Deputy Premier Matteo Salvini, who is also Italy’s interior minister, told reporters he remains in favor of public-private cooperation in infrastructure.

Premier Giuseppe Conte says procedures have begun to revoke Autostrade per l’Italia’s concession to operate some 3,000 kilometers (nearly 1,900 miles) of Italian highways, about half of the total highways operated by private companies.

Italy’s main union confederation estimates it would cost Italy between 15 billion and 18 billion euros ($17.1 billion to $20.6 billion) to revoke the highway rights.

The company that owns Autostrade, Atlantia, lost 9.5 percent in its shares to 17.50 euros in trading Monday, after a late opening due to volatility. It shed 22 percent last Thursday, the first trading day after the government announced its intentions, before returning to positive gains on Friday.