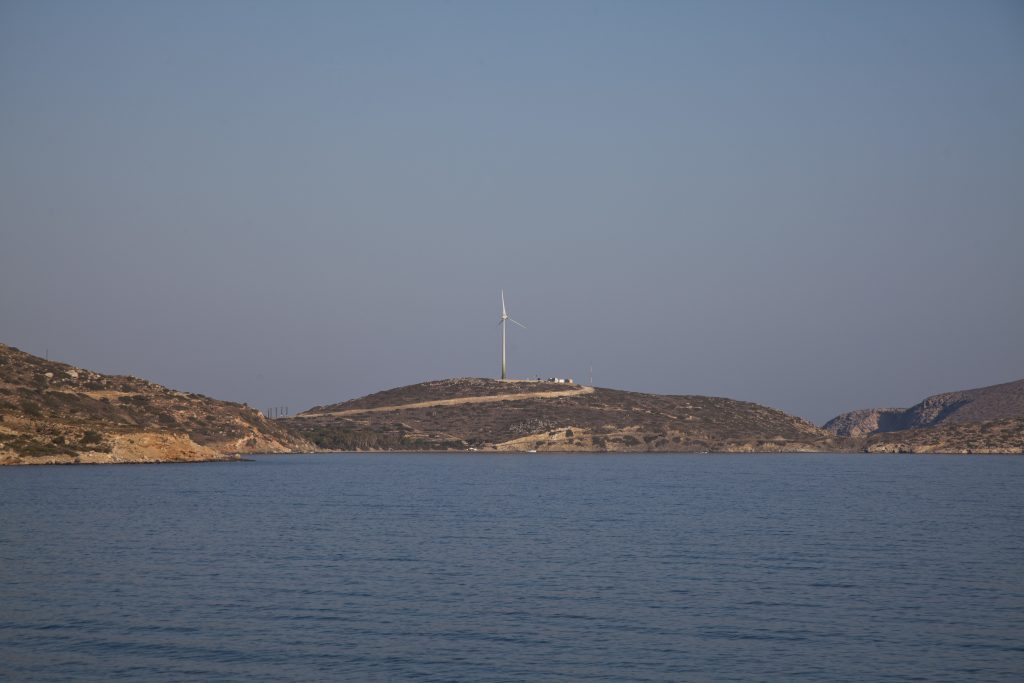 When the blades of its 800-kilowatt wind turbine start turning, the small Greek island of Tilos will become the first in the Mediterranean to run exclusively on wind and solar power.

The sea horse-shaped Greek island between Rhodes and Kos has a winter population of 400. But that swells to as many as 3,000 people in the summer, putting an impossible strain on its dilapidated power supply.

This summer, technicians are conducting the final tests on a renewable replacement system that will be fully rolled out later this year. It will allow Tilos to run exclusively on high-tech batteries recharged by a wind turbine and a solar park.

The European Commission says Tilos will be the first autonomous renewable green island in the Mediterranean. It plans to use the project as a blueprint for other small islands across the European Union that have limited grid connection to the mainland. The EU has largely funded the project, providing 11 million euros ($12.5 million) of the total 13.7 million-euro ($15.7 million) cost.

“The innovation of this program and its funding lies in the batteries, the energy storage, that’s what’s innovative,” project manager Spyros Aliferis said. “The energy produced by the wind turbines and the photovoltaics will be stored in batteries, so that this energy can be used for the grid when there is demand.”

The batteries store power during sunny and windy conditions, releasing it during periods of heavy demand and lower production, such as at nighttime and the peak tourist season, to keep the grid powered up.

To work, it required an overhauled grid with smart meters installed in homes and businesses to calculate times of peak demand.

Currently, Tilos gets its energy from an underwater cable that runs from Kos to the island of Nisiros and on to Tilos. That creates an erratic, outage-prone service that routinely breaks appliances and has forced many businesses to rely on diesel generators.

While lacking the dazzle of other Greek islands like Mykonos and Santorini, Tilos — a 14-hour ferry ride from the mainland — is a quiet vacation spot that sees an average of 13,000 visitors a year. It’s known as a green island, popular with hikers and bird watchers, and most of it is now a protected nature reserve.

Mayor Maria Kammas saw a green-energy system as the island’s natural next step.

“For many years now, Tilos has plotted a course that is dedicated to protecting the environment,” she said. “We are seeking visitors, tourists actually, people who will visit our island who love the environment and want to protect it and nature as it was given to us.”

Tourism is the main source of revenue for the island. But businesses have been plagued by lengthy blackouts, leaving hotels without air conditioning and restaurants without light or power, forcing them to discard food from warm refrigerators.

Hotel owner Sevasti Delaporta has closely followed the project since its inception over two years ago. There were initial doubts about the idea among Tilos residents, but tests have run smoothly, even during peak times this summer. The grid is expected to be fully operational in a few months.

With long sunny days and average temperatures 91 degrees Fahrenheit during the summer, tourists spend their mornings at the beach and afternoons napping. The island comes alive in the evening, when businesses open and residents and tourists alike flock to bars and cafes.

Eva Lemaier has visited the island every year for more than two decades. Coming from the Netherlands, which has one of the world’s highest environmental standards, she says Tilos’ green policies stand out in Greece.

“I’m also a little bit proud of Tilos about what they are doing now, with the renewable energy,” she said. “I think it’s good for the island not to be dependent on other islands.”