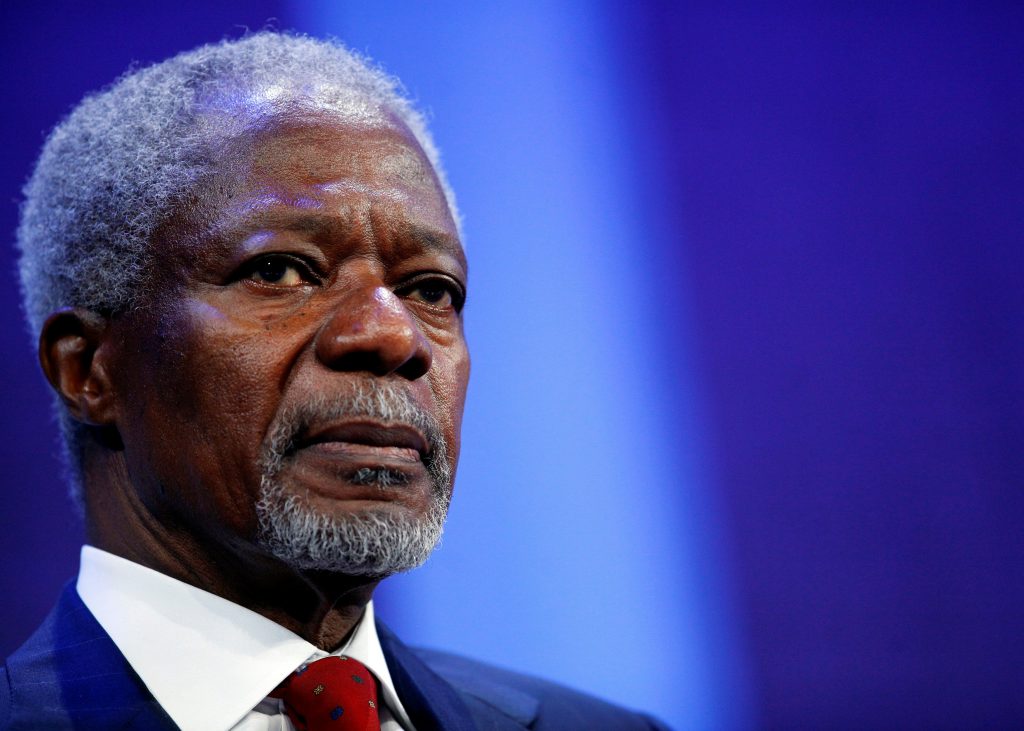 Former U.N. Secretary-General and Nobel Peace Prize laureate Kofi Annan died on Saturday at the age of 80, his foundation said.

Annan, a Ghanaian national, died in a hospital in Bern, Switzerland, his close associates said.

In Geneva, the Kofi Annan Foundation announced his peaceful death after a short undisclosed illness, saying he was surrounded in his last days by his second wife Nane and children Ama, Kojo and Nina.

After rising through the ranks of the United Nations, Annan served two terms as U.N. Secretary-General in New York from 1997-2006 and retired to live in a Swiss village in the Geneva countryside. His 10-year-old foundation promotes good governance and the transformation of African agriculture.

“In many ways, Kofi Annan was the United Nations. He rose through the ranks to lead the organization into the new millennium with matchless dignity and determination,” U.N. Secretary-General Antonio Guterres, whom Annan had chosen to head the U.N. refugee agency, said in a statement.

Annan and the United Nations shared the 2001 Nobel Peace Prize for efforts to reform the world body and give priority to human rights issues.

As head of U.N. peacekeeping operations, Annan was criticized for the world body’s failure to halt the genocide in Rwanda in the 1990s.

As U.N. boss he was linked to peace efforts to reunite the divided island of Cyprus, submitting a reunification blueprint which was rejected in a referendum by Greek Cypriots in 2004.

He staunchly opposed the U.S.-led invasion of Iraq in 2003 and later served as the first U.N. envoy at the start of Syria’s war, but quit after world powers failed to fulfill their commitments, saying, “I lost my troops on the way to Damascus.”

“The U.N. can be improved, it is not perfect but if it didn’t exist you would have to create it,” he told the BBC’s Hard Talk during an interview for his 80th birthday in April, recorded at the Geneva Graduate Institute where he had studied.

“I am a stubborn optimist, I was born an optimist and will remain an optimist,” added Annan, who often joked about having learned from locals to wear earmuffs against the freezing cold during his undergraduate years at Macalester College in St. Paul, Minnesota, in the United States.

“Kofi Annan devoted his life to making the world a more peaceful place through his compassion and dedication to service. He worked tirelessly to unite us and never stopped fighting for the dignity of every person,” U.S. envoy to the U.N. Nikki Haley said.