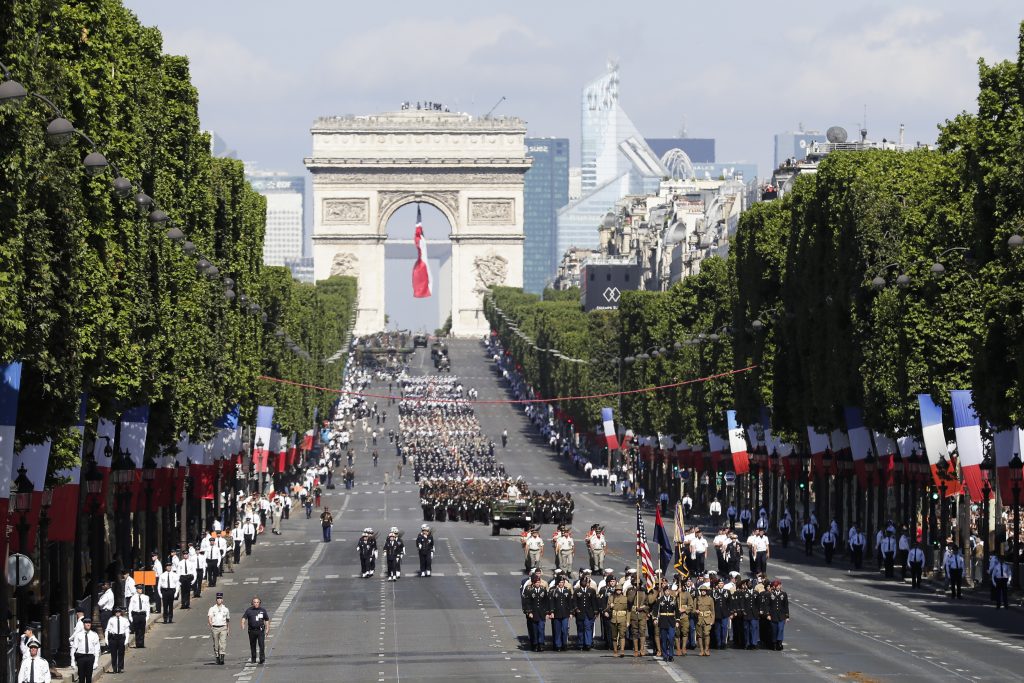 President Donald Trump canceled his plans for a military parade in Washington this Veteran’s Day, accusing the capital city’s government of giving him a “ridiculously high” cost figure, and said he may travel to a different celebration in Paris instead.

“The local politicians who run Washington, D.C. (poorly) know a windfall when they see it. When asked to give us a price for holding a great celebratory military parade, they wanted a number so ridiculously high that I cancelled it,” Trump said Friday on Twitter. “Never let someone hold you up!”

In a subsequent message, Trump said he may instead attend an already scheduled U.S. parade at Andrews Air Force Base on a different date, followed by a celebration in Paris scheduled for Nov. 11 – the 100th anniversary of the end of the First World War in 1918.

He didn’t rule out a future event in the U.S. “Maybe we will do something next year in D.C. when the cost comes WAY DOWN. Now we can buy some more jet fighters!” he said.

Trump’s tweets came the day after a Pentagon spokesman said in a statement that a parade originally targeted for this coming Nov. 10 may be pushed off until 2019. “The Department of Defense and White House have been planning a parade to honor America’s military veterans and commemorate the centennial of World War I,” Col. Rob Manning, a Pentagon spokesman, said in a brief statement.

The statement didn’t say why the event had been put off. Earlier Thursday, CNBC reported that the parade was expected to cost as much as $92 million, some $80 million more than originally estimated, according to officials it didn’t name.

The defense policy act that Trump signed into law at Fort Drum in Upstate New York this week authorized the parade. But lawmakers asked Defense Secretary Jim Mattis not to use equipment or personnel that might affect military operations or readiness.

Trump said in February that the march would probably be held on Veteran’s Day in November and take a route along Pennsylvania Avenue.

Trump was impressed by the pomp and flourishes of military might when he attended the Bastille Day parade in Paris last year as a guest of French President Emmanuel Macron. He asked the Pentagon to come up with a plan for a similar event in Washington, initially suggesting it be held as part of the U.S.’s annual Independence Day celebration.

“It was a tremendous day, and to a large extent because of what I witnessed, we may do something like that on July 4th in Washington down Pennsylvania Avenue,” the president said last September. “We’re going to have to try to top it, but we have a lot of planes going over and a lot of military might, and it was really a beautiful thing to see, and representatives from different wars and different uniforms.”

Trump told Fox News’ Jeanine Pirro in February, however, that he wanted the cost to be “reasonable.”

Although troops participate in the presidential inaugural parade and other processions, the U.S. doesn’t usually have large ceremonial marches by armed forces, something that’s typical in some other countries. The last military parade in Washington was in 1991, after the American victory in the Gulf War.

Dick Durbin of Illinois, the Senate’s second-ranking Democrat, said he wouldn’t attend the parade that Trump was planning.

“I believe that spending millions, if not more, on the president’s amusement is a colossal waste of funds that should be spent to make sure our troops are ready for battle, to come home safely, their families receive all the support they deserve, and that the waiting lines at VA facilities have been reduced,” Durbin said. “That’s how we can honor our veterans. Not with a parade for the president.”

Senator Lindsey Graham, R-S.C., an Air Force veteran, told CNN that a parade would be “cheesy and shows weakness.”