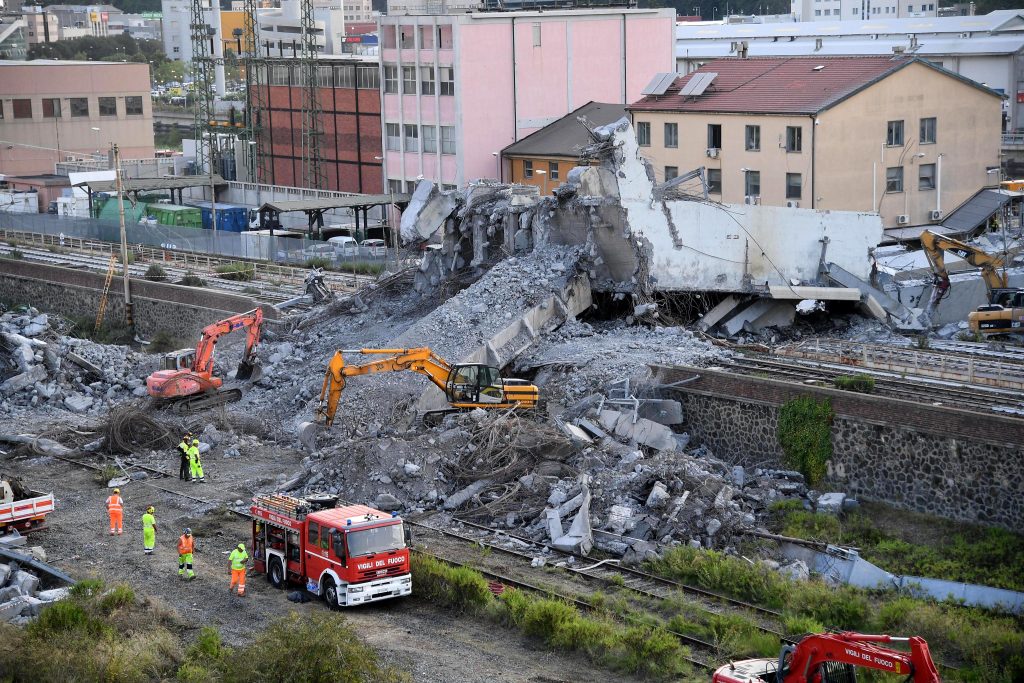 Rescue workers searched through tons of concrete and steel from the collapsed Genoa highway bridge for a fourth day on Friday as Italians prepared to bury the 38 victims of a disaster that has angered the public and rattled industry.

A fire among the rubble held up part of the operation, sending clouds of white smoke up before being extinguished. A spark from metal cutting equipment was thought to have caused the blaze that started in a warehouse under the ruined bridge.

The confirmed death toll from the collapse of a 660-foot stretch of the bridge on Tuesday that sent vehicles plummeting 150 feet to the ground, remained at 38, but officials have said there still may be 10-20 people missing.

More than 600 people had to leave their apartments below the remaining spans of the bridge for fear of further collapse. Officials have decided the buildings will be demolished as it would be too dangerous to leave them there.

A state funeral for most of the victims is due to be held on Saturday morning at the port city’s Exhibition and Trade Center, with the attendance of President Sergio Mattarella and Prime Minister Giuseppe Conte.

But some families have said they will boycott the event and hold their own private services, as a sign of protest against what they say was negligence that caused the bridge to collapse.

The government has declared Saturday a national day of mourning.

Shares in the parent company of Autostrade per l’Italia which runs the highway plunged more than 30 percent in the days after the collapse, but were recovering slightly on Friday as investors said government threats to revoke its concessions might be political rhetoric rather than a likely outcome.

The Transport Ministry has given Autostrade 15 days to show it had met all its contractual obligations, and wants the company to rebuild the bridge at its own expense.