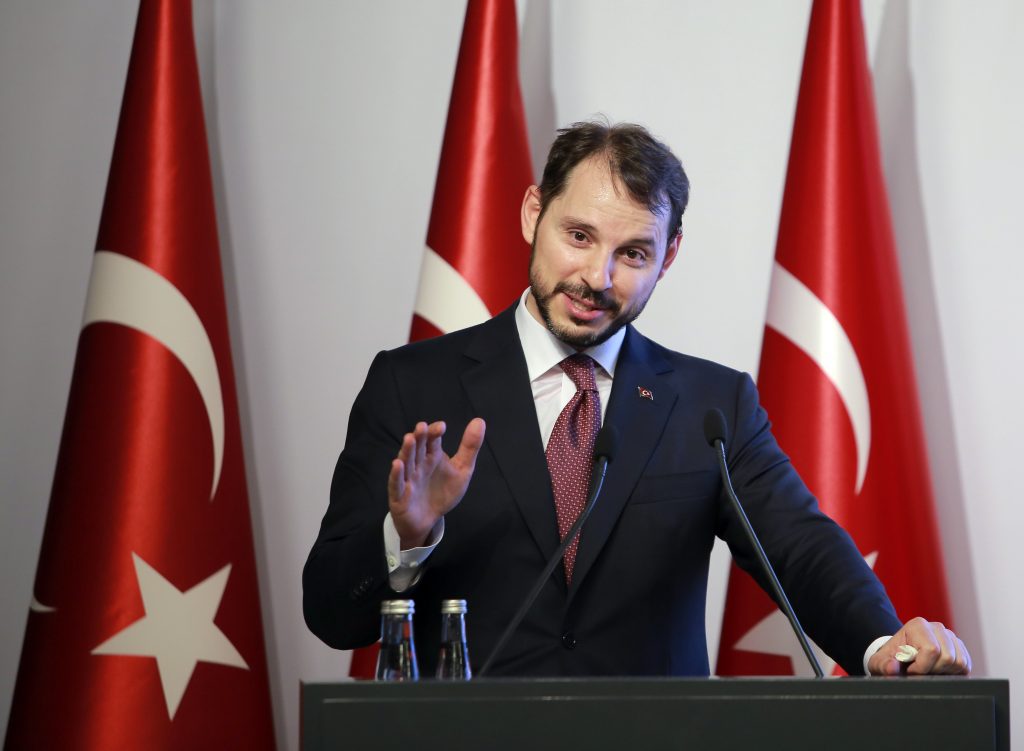 Turkey’s finance chief tried to reassure thousands of international investors on a conference call Thursday, in which he pledged to fix the economic troubles that have seen the country spiral into a currency crisis.

The national currency recovered somewhat from record lows hit earlier this week, a day after Qatar pledged $15 billion in investments to help Turkey’s economy. The lira strengthened some 4 percent against the dollar, to around 5.75 per dollar.

Treasury and Finance Minister Berat Albayrak was quoted by private media NTV as saying the economy would emerge stronger from the turmoil.

Albayrak said Turkey’s banks are “healthy and strong” and that implementing structural reforms and maintain tight monetary policy to fight inflation remain a priority. The minister ruled out any move to limit money flows — which is a possibility that worries investors — or any assistance from the International Monetary Fund, NTV said.

The lira had nosedived in recent weeks, hitting a record low of 7.24 this week, as investors worried about fundamental economic problems in the country and a diplomatic and trade dispute with the United States.

Among the big concerns is that Turkey has amassed high levels of foreign debt to fuel growth in recent years. And as the currency drops, that debt becomes so much more expensive to repay, leading to potential bankruptcies.

Also worrying investors has been Erdogan’s refusal to allow the central bank to raise interest rates to support the currency, as experts say it should. Erdogan has tightened his grip since consolidating power after general elections this year.

In his conference call, Albayrak did not appear to specify whether the central bank would be assured its independence or hint at whether rates would be allowed to rise.

Doubts about Turkey’s future intensified as relations with the United States, a longtime NATO ally, soured. The U.S. imposed sanctions on two Turkish government ministers and doubled tariffs on Turkish steel and aluminum imports over the continued detention of an American pastor on espionage and terror-related charges.

Turkey retaliated with some $533 million of tariffs on some U.S. imports — including cars, tobacco and alcoholic drinks — and said it would boycott U.S. electronic goods, singling out iPhones.

The White House said Wednesday that the United States “won’t forget” how Turkey treated Andrew Brunson, the detained American pastor, after a court rejected his appeal for release.

Press secretary Sarah Huckabee Sanders also criticized Turkey’s move to impose tariffs on some U.S. goods as “regrettable and a step in the wrong direction.” She wouldn’t be drawn on whether the Trump administration would respond.

The Turkish currency began to recover after authorities this week took steps to help bank liquidity. Also helping the currency were moves by Turkey this week to gain favor with European countries, including releasing two Greek soldiers and an Amnesty International human rights campaigner from prison.