Seniors Are Filing for Bankruptcy More Than Ever 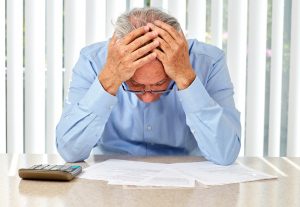 More than ever before, financial woes are tarnishing their golden years.

Despite an economic boom, Americans 65 and older are filing for bankruptcy in record numbers, and the trend is likely to continue, according to new research that warns that seniors are facing a financial crisis with “increasing force and urgency.”

It’s a concern, some experts say, that hasn’t significantly hurt economic growth, but presents a serious social problem that has been getting worse for more than two decades as debt and medical costs go up, and seniors’ savings and pension benefits go down.

For elected officials and candidates now campaigning for office, the problem also raises public policy questions about how wide of a safety net the government should offer for older people who are living longer and what the best way is to care for them.

“In prior decades, Americans collectively decided that we have a responsibility to our older citizens to absorb the financial risks they face,” a national study published this week found. “But, it appears that we have since abandoned that commitment.”

In states like Michigan, where the population is aging more quickly than the national average and questions loom about the future of some pensions, the problem may become particularly acute.

“We’re most definitely going to have to address it,” said Paul Bridgewater, president and CEO of the nonprofit Detroit Area Agency on Aging. “We’re compiling the data to come up with solutions. But across the board, as the baby boomers go into retirement, there are going to be a number of situations that we’ve never had to deal with.”

Meanwhile, news organizations are publishing reports on how well the economy is performing. In July, the White House website linked to more than a dozen of them under the headline: “Jobs, Jobs, Jobs: The American Economy Is Booming.”

In the national study, “Graying of U.S. Bankruptcy: Fallout from Life in a Risk Society,” four researchers — two of whom are at Midwestern universities — Indiana University and the University of Illinois — looked at data on the age of bankruptcy filers going back to 1991.

In nearly three decades, the rate at which seniors file for bankruptcy more than doubled and the percentage of seniors in the bankruptcy system had increased by almost five times. Of seniors 75 and older, the increase since 1991 was nearly 10 times.

“The magnitude of growth in older Americans in bankruptcy is so large that the broader trend of an aging U.S. population can explain only a small portion of the effect,” the study said.

The change, the study suggested, is being caused by a shift in responsibility for caring for older people. Whereas employers and government once offered more through pensions and benefits, individuals are expected to pick up a greater share of their own financial well-being.

It’s a concern that was raised a decade ago as employers phased out their pension plans and replaced them with 401(k) plans, which transfers the risk for paying lifetime benefits from the company to workers.

“In our data,” the new bankruptcy study said, “older Americans report they are struggling with increased financial risks, namely inadequate income and unmanageable costs of health care, as they try to deal with reductions to their social safety net.”

Too Little, Too Late

But, as the study points out, bankruptcy protection may offer relief to younger people who are working, but it doesn’t much help retirees, who have far less time to recover and are living off limited and fixed incomes.

“For older Americans, bankruptcy is too little too late,” the study said. “By the time they file, their wealth has vanished, and they simply do not have enough years to get back on their feet.”

And while the financial misfortune of older Americans likely won’t have much effect on the overall economy, it could become a significant social problem, especially in Michigan, said Jonathan Silberman, an economics professor at Oakland University.

It’s possible, Silberman said, that some of the fallout from this trend could be offset in Michigan by a large number of people drawing income from pensions, instead of a 401(k) retirement plans.

The difference between the two plans is that a pension, which companies traditionally offered, establishes a set amount of monthly income, whereas a 401(k) allows employees to save money in investments that go up and down in value.

Still, Silberman said, even with a pension, retirees could lose some of those benefits.

And, he said, there are other factors: medical care costs, long-term care costs and debt.

The study found the median senior bankruptcy filer enters bankruptcy with $17,390 in the red.

“They may have debt themselves with a mortgage and credit cards,” Silberman said. “They may be trying to help their children, their grandchildren with higher education costs. These are all pressures on the elderly that were not as prevalent in the past.”

Silberman, who is still working at 72, said he is not concerned about his own retirement years, but the new study on senior bankruptcies should be a wake-up call for younger workers.

“In five or 10 years it might be a more serious social problem that people are more concerned about,” he said. “And then there’s always this issue: What kind of programs can ameliorate this and what is the responsibility of the people who are in this situation?

“It’s a difficult public policy and social issue that the political process will have to sort out.”