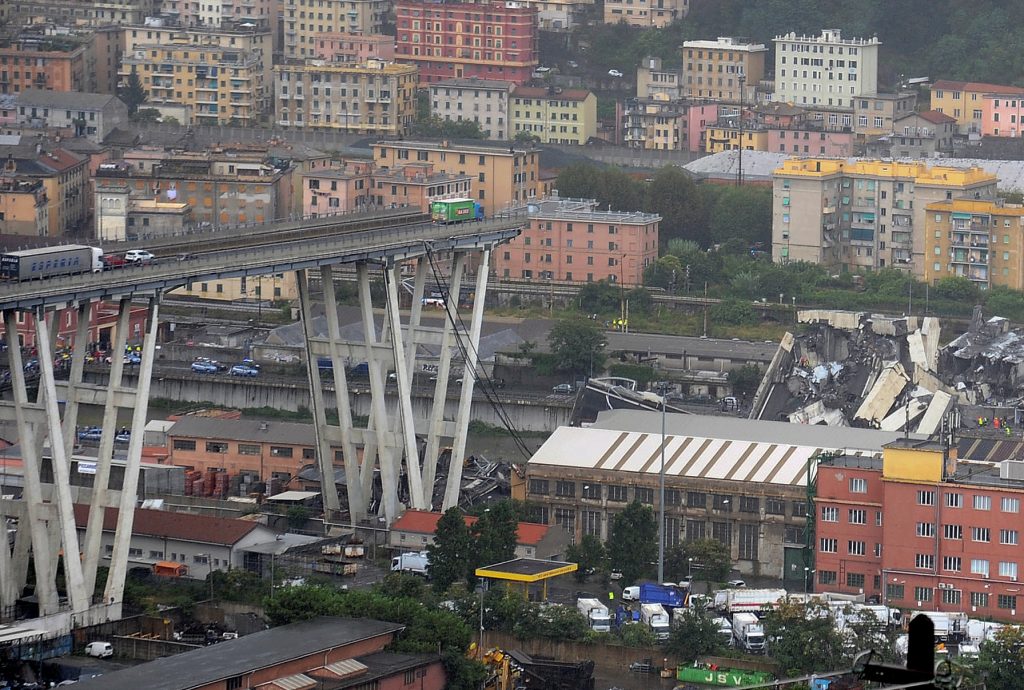 Italy’s anti-establishment government, outraged at the deadly collapse of a 50-year-old bridge, has presented the disaster as a warning to Brussels to give it more leeway to upgrade the country’s aging infrastructure.

But the political anger generated by Tuesday’s tragedy in Genoa, in which at least 39 people died, could instead end up piling even more financial pressure on the state – from nervous holders of its 2 trillion euros ($2.3 trillion) in bonds.

Within hours of the viaduct giving way and sending vehicles plummeting, Deputy Prime Minister Matteo Salvini said the EU must allow Rome to include in its next budget all the funds needed to ensure the country’s infrastructure was safe.

That investment, to be calculated after an emergency audit of bridges and tunnels nationwide, comes on top of plans outlined by the government which took office in June to spend tens of billions of euros on tax cuts, easing pension rules and a basic income for the poor.

It also wants to avoid triggering a planned rise in value-added tax (VAT), agreed with Brussels by the previous government to meet budget goals.

For Italy’s creditors, the fiscal gap is a growing worry.

NOT ALWAYS A PRIORITY

Gustavo Piga, economics professor at Rome’s Tor Vergata University, said regardless of EU rules, Rome had not always demonstrated that infrastructure was at the top of its agenda.

“Italy sorely needs higher and better public investments but they haven’t been a priority for politicians in recent years,” Piga said, noting that the previous administration had even appeared to divert some funds away from infrastructure after winning some budgetary leeway from Brussels for investments.

Total investment and maintenance spending on Italian transport infrastructure fell by 58 percent between 2008 and 2015, according to data by the Organisation for Economic Cooperation and Development.

But more money could have been invested, according to an Italian central bank analysis last year. As overall public investment in Italy fell 35 percent in real terms between 2007 and 2015, Rome hiked spending on everyday things like public salaries and pensions by 7 percent.

The European Commission also sent a reminder on Wednesday that it had for some time been encouraging the ruling coalition in Rome to prioritize infrastructure spending.

The Commission, the EU’s executive, said it had approved in April an 8.5 billion euro investment plan for Italian motorways, including in the Genoa region, under EU state aid rules.

Italy is also set to receive around 2.5 billion euros in European funds between 2014 and 2020 to invest in network infrastructures, such as roads or rail, the Commission added.

Italy’s economy minister, a former economics professor who appears more attuned to the moods of markets than some of his colleagues, also hinted on Wednesday that infrastructure might not fit neatly into the call for easier EU funding rules.

Giovanni Tria said in a statement that his priority would not be just on higher public investment, which was already factored into his upcoming budget; the government would also aim to “overcome shortfalls in the ability to spend and intervene.”

A Treasury source said Tria was already discussing a big overall public investment plan with EU officials, worth a total of 150 billion euros over 10 years. Italy does not need to raise its deficit to boost infrastructure spending, the source added.

The bridge disaster may also fail to further the government’s cause in Brussels for other reasons: The viaduct revealed problems not long after it was completed in 1967 and it is maintained by a private toll operator, not the government.

Autostrade per l’Italia, part of the Milan-listed Atlantia group, said it complied with all its maintenance requirements and made regular safety checks on the bridge. It said it spent more than 1 billion euros a year over 2012-2017 to maintain and upgrade its road network spanning 3,000 km.

Autostrade has not disclosed its specific maintenance budget for the bridge, which was part of its concession on the A10 motorway linking the port city of Genoa with southern France.

Antonio Brencich, an engineering professor at Genoa University, told state media the bridge had been shown to be defective just two decades after it was built – a comment supported by anecdotal evidence of those who lived below it.

“In the ’80s pieces of cement came down and ruined parked cars, and there was a procedure – you filled out a form to claim compensation for the repairs,” said Salvatore Lorefice, 58, a pensioner who worked at a warehouse directly under the bridge.