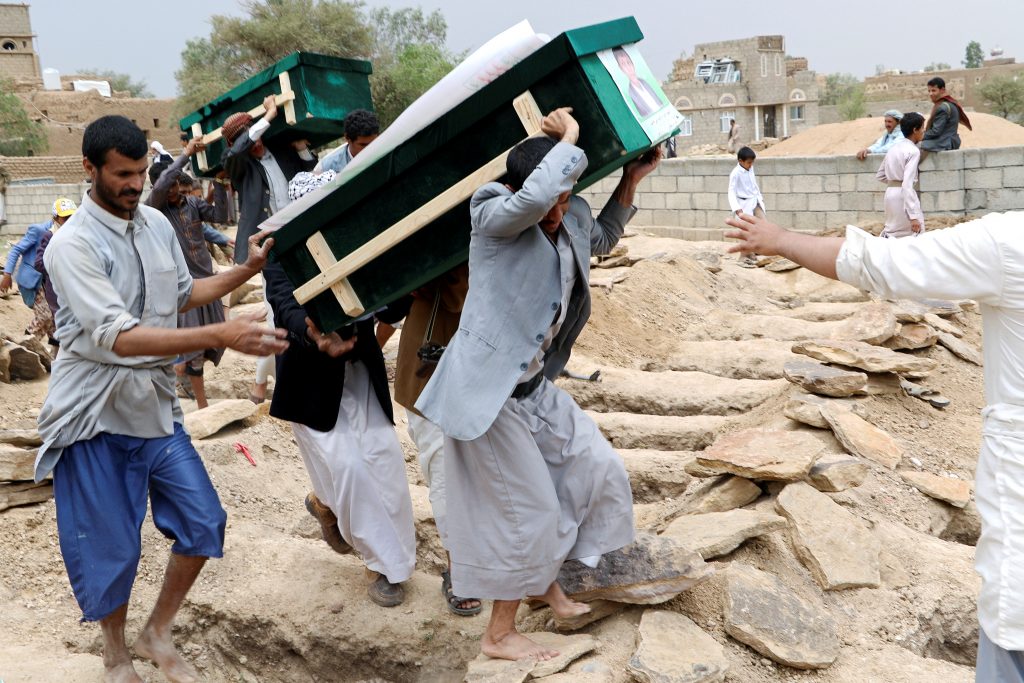 A senior general urged Saudi officials to conduct a thorough investigation into an airstrike that killed at least 40 children in Yemen, the Pentagon said Monday, an indication of U.S. concern about allied nations’ air operations against Houthi militants.

The discussions took place in the Saudi capital on Sunday as the United States seeks information about the attack, the latest incident resulting in civilian casualties in Yemen’s prolonged conflict.

Defense Secretary Jim Mattis said Sunday that he had “dispatched a three-star general into Riyadh to look into what happened” in the strike, which hit a bus filled with children in Yemen’s northern Saada province Thursday.

The Saudi-led coalition called the strike a “legitimate military action” aimed at forces responsible for a recent missile attack on Saudi Arabia but authorized an investigation.

Defense officials described the U.S. general’s visit as a fact-finding mission and said the United States would not conduct a separate investigation.

Lt. Cmdr. Rebecca Rebarich, a Pentagon spokeswoman, said the general “adjusted his already scheduled visit to Saudi Arabia to discuss the incident with the Saudis and look into the situation.”

“He pressed the Saudis to devote the resources and oversight required to do a thorough and complete investigation and release the results to the public,” Rebarich said in a statement. She did not identify the officer.

The strike has drawn renewed attention to the war in Yemen, which since 2015 has pitted Saudi Arabia and a coalition of mainly Arab countries against Yemeni Houthi rebels who Western officials say receive support from Iran.

The coalition has faced widespread criticism from civil society groups and, increasingly, U.S. lawmakers who have decried repeated strikes on civilian targets. Critics also accuse the United States of failing to prevent civilian deaths in an operation backed by the U.S. government.

The U.S. military supports the Saudi-led mission in Yemen by refueling coalition planes in-flight and providing intelligence. But U.S. officials have sought from the beginning to distance themselves from the intervention and its impact on noncombatants.

Mattis, speaking during a trip to South America, downplayed the U.S. role in the Yemen conflict. The United States does assist the coalition in seeking to avoid strikes on protected locations, he said, but does not help with so-called “dynamic targeting,” which occurs when pilots identify targets as they fly missions.

“We are not engaged in the civil war,” Mattis said. “We will help to prevent, you know, the killing of innocent people.”

Critics have rejected the U.S. military’s assertion that it is not involved in the Yemeni conflict because it does not, for example, launch strikes on Houthi targets.

Larry Lewis, a former State Department and Pentagon official who advised the Saudi government in 2016 as it launched its investigatory body, the Joint Incidents Assessment Team (JIAT), said the country’s procedures for probing such incidents were “not mature.”

“It’s not enough for them to identify problems. You have to make changes to operations” that will avoid similar problems in the future, said Lewis, who is now an analyst at the Center for Naval Analysis.

According to Andrea Prasow, deputy Washington director for Human Rights Watch, Saudi investigators had cleared coalition military officials of legal responsibility in virtually all investigations the JIAT had conducted.

“That’s juxtaposed by public reporting on a years-long massacre on civilians by the coalition,” she said.