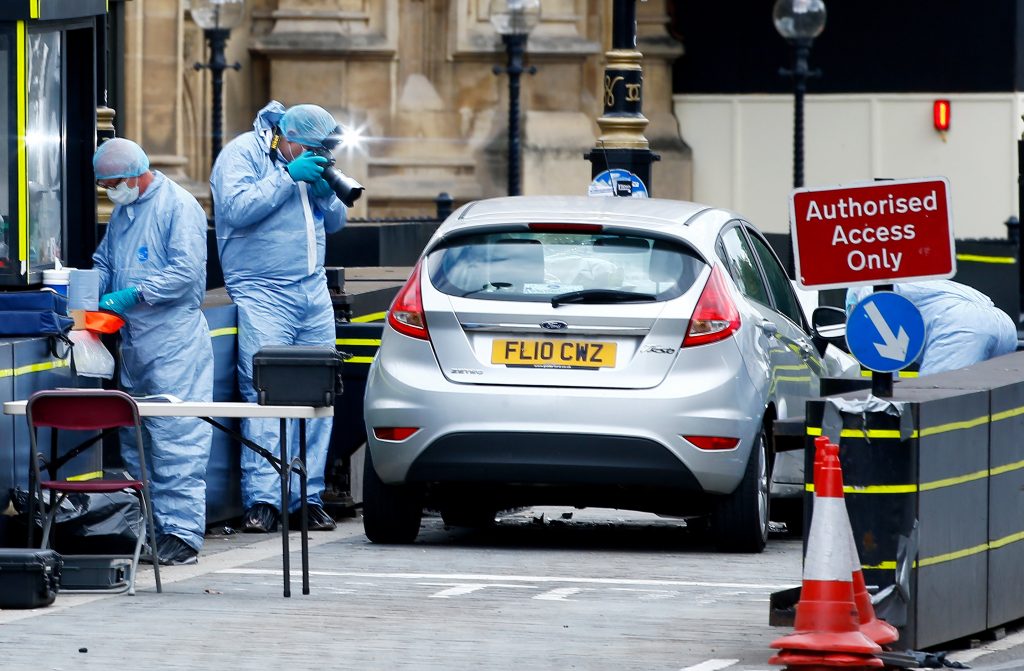 Police flooded central London streets and cordoned off the city’s government district Tuesday, after a speeding car plowed into cyclists and crashed outside Parliament in what authorities were treating as an act of terrorism.

With the driver in custody, counterterror detectives were working to uncover the motive behind what they suspect is the fourth vehicle attack in Britain — and the second on Parliament — in 18 months.

“Given that this appears to be a deliberate act, the method and this being an iconic site, we are treating it as a terrorist incident,” Assistant Commissioner Neil Basu, Britain’s top counterterrorism officer, told reporters.

A rooftop camera recorded the silver Ford Fiesta driving past Parliament and suddenly veering sharply to the left, striking cyclists waiting at a set of lights, then crossing the road and crashing into a barrier outside Parliament. Armed police surrounded the car within seconds, pulling a man from the vehicle. Police said the driver was alone and no weapons were found in the car.

Three people were hurt, none critically.

Police arrested the 29-year-old driver, a resident of England’s Midlands region who was not previously known to counterterrorism police or the intelligence services. Basu said the suspect was not cooperating with police. Security Minister Ben Wallace said the man, whose name was not released, was a British citizen originally from another country.

Police said the car was driven from Birmingham in central England to London late Monday and was in central London for more than seven hours before the crash. Detectives were searching two properties in Birmingham and one in another Midlands city, Nottingham.

Police said they did not believe there was any ongoing threat from Tuesday’s incident. After a meeting of the government’s crisis committee, COBRA, officials said Britain’s terrorism threat level would remain at “severe,” meaning an attack is highly likely. It has briefly been raised to the highest level, “critical,” after some previous attacks.

Prime Minister Theresa May, who was on vacation in Switzerland, praised “the formidable courage of our emergency services” and urged the public “to remain vigilant — but also to come together and carry on as normal.”

“The twisted aim of the extremists is to use violence and terror to divide us,” PM May said in a statement. “They will never succeed.”

One injured person was treated at the scene and two were taken to local hospitals, where they were treated and released.

“The car drove at speed into the barriers outside the House of Lords. There was a loud bang from the collision and a bit of smoke,” Ewelina Ochab told The Associated Press. “The driver did not get out. The guards started screaming to people to move away.”

Police shut the nearby Westminster subway station, and asked people to stay away from the area, which is filled with government offices and major tourist attractions, including Westminster Abbey.

Donovan Parsons, a cameraman for ITV’s “Good Morning Britain,” was filming outside Parliament when he heard a loud crash.

“I saw the car crashed into the barrier outside Westminster Palace, with smoke coming out of the vehicle. Police were around it, telling people to get back. … They dragged someone out of the car,” Parsons said.

“It didn’t look like an accident,” said Jason Williams, who lives nearby. “How do you do that by accident?”

The early morning scenes brought a sickly sense of déjà vu to many Londoners, whose city has been a target of violent attacks over the decades — from Irish terrorists, Islamic jihadists and far-right terrorists.

Last year alone, the city was hit by three deadly attacks. In March 2017, Khalid Masood plowed a car into crowds on Westminster Bridge, killing four people, then fatally stabbed a police officer before being shot dead in a courtyard outside Parliament.

Less than three months later, a van rammed into pedestrians on London Bridge before three men abandoned the vehicle and attacked weekend revelers in the nearby Borough Market. Eight people were killed and 48 injured.

In June 2017, a far-right terrorist drove a van into a crowd of worshippers leaving a London mosque, killing one man and injuring eight others.

That attack followed the suicide bombing a month earlier at an Ariana Grande concert in Manchester that killed 22 people.

British authorities say the threat is not diminishing. Since March 2017, they have foiled 13 Islamist-inspired plots and four far-right plots, and currently have 676 live counterterrorism investigations, officials said Tuesday.

This time, there was relief that no one was killed and that there was a quick return to normality. Most of the cordons were lifted by mid-afternoon, apart from a stretch of road right outside Parliament, where forensics officers in blue coveralls collected evidence from the crashed Ford Fiesta.

While PM May and other British politicians expressed sympathy for the victims and thanks to first responders, U.S. President Donald Trump tweeted that the crash was “another terrorist attack in London.”

“These animals are crazy and must be dealt with through toughness and strength!” Trump added.

President Trump has a history of tweeting about violence, or alleged violence, in London. He angered many when he said a London hospital was like a war zone because of knife violence.

Since last year’s vehicle attacks, concrete barriers or bollards have been erected along bridges and beside some major roads to prevent cars mounting the sidewalk to hit pedestrians, and there are calls for the street outside Parliament to be closed to traffic.

“Just as the terrorists, the bad guys, evolve and find new ways to kill, to injure, to maim, to divide our communities, the police, the security services, the emergency services evolve and find ways to keep us safe,” he said.