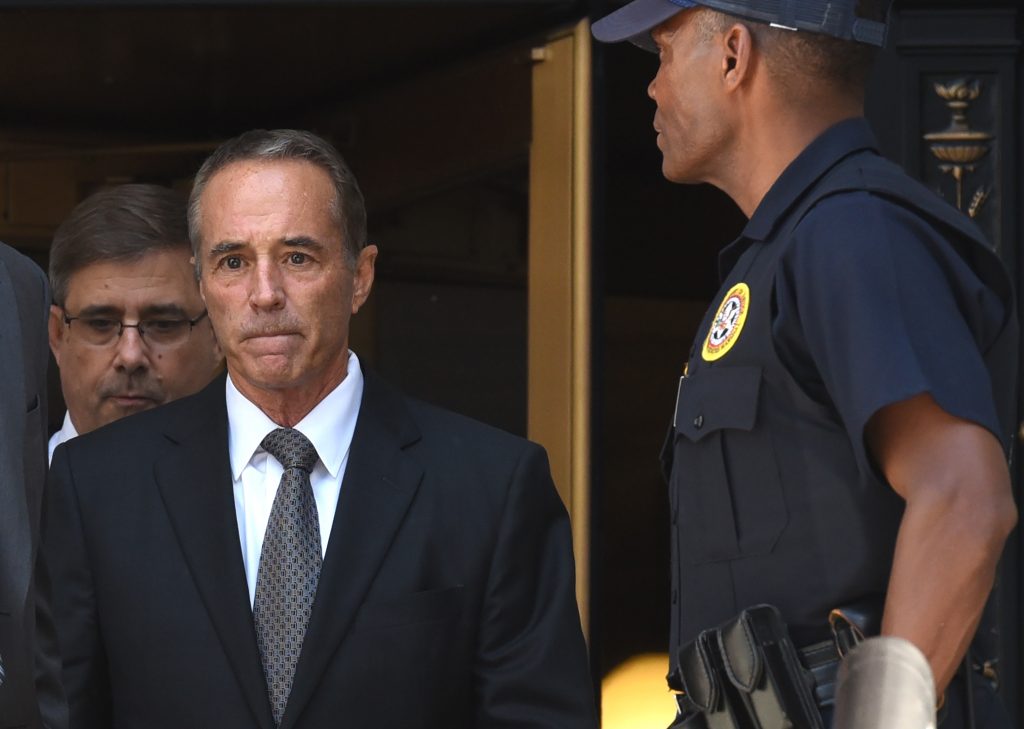 Republicans may have to nominate Rep. Chris Collins for another political office in order to strip his name from the November ballot after the three-term conservative lawmaker dropped his re-election bid following insider trading charges.

The odd move may be necessitated by New York state election law, which sharply defines how a candidate’s name can legally be erased from the ballot. Death is one. Disqualification for not being a U.S. citizen or at least 25 years old is another. A third, and the only possibility likely to apply to Collins, would allow him to remove his name if he accepts a nomination for another office, such as county clerk or district attorney.

Republican leaders from the eight counties in Collins’ western New York district will soon meet to discuss the party’s next steps following Collins’ announcement that he would get out of the race. He was charged last week with illegally using inside information about a biotech company to help his son avoid hundreds of thousands of dollars in loses when one of the company’s drugs failed in a medical trial. Collins has pleaded not guilty and vowed to fight the charges.

Several Republicans have either announced campaigns or been mentioned as possible contenders for Collins’ seat, which represents the area between Rochester and Buffalo. They include Assemblyman Ray Walter; Erie County Comptroller Stefan Mychajliw; state Sen. Robert Ortt; real estate developer Carl Paladino, who made a failed bid for governor in 2010; and David Bellavia, a local radio show host who lost to Collins in the 2012 primary.

Local party leaders will pick Collins’ replacement for the ballot.

New York’s 27th Congressional District is considered the most right-leaning in New York state. Voters in the district backed President Donald Trump over Hillary Clinton by nearly 25 percentage points in 2016, when Collins beat his Democratic challenger by more than 2-to-1. As one of Trump’s most loyal allies in Congress, Collins was considered a strong favorite.

Support for Trump is already emerging as a big factor in the race.

Paladino, who worked on Trump’s campaign, said his ties to the president would help the area. Paladino was a member of Buffalo’s school board until last year, when he was removed after writing that he wanted to see former President Barack Obama dead of mad cow disease.

Voters “understand my friendship with and respect for the president and how that will benefit the district and all of western New York,” Paladino said in his campaign announcement Monday.

With momentum expected to favor Democrats across the nation this November, Republicans say they can’t afford to lose the 27th.

“I cannot stand by and let this critical Congressional seat fall into the hands of a radical left-wing candidate who will be a vote to impeach President Trump,” Mychajliw said in a statement announcing his candidacy, which came out hours after Collins announced his decision not to run.

At first, Collins planned to stay on the ballot while he fought the charges, but he announced a change of heart on Saturday, saying in a statement that he would “suspend” his campaign. He said he was doing so “in the best interests of the constituents of NY-27, the Republican Party and President Trump’s agenda.”

Collins will serve out the remainder of his term. He said he would “continue to fight the meritless charges.”