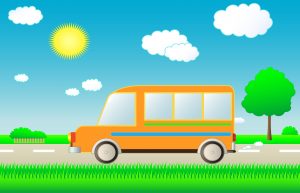 Some Orthodox Jackson residents will now have busing directly provided by the town, following a decision by the Board of Education (BOE) to begin transporting to certain private schools.

While only a relatively small percentage of the town’s growing non-public school population will be getting transportation for the coming school year, Rabbi Avi Schnall, New Jersey Director for the Agudath Israel of America, said that move was a very positive one.

“It’s a good start,” he told Hamodia. “More people are moving there, and Jackson is making a smart move by beginning this process slowly and in a way that makes sense economically.”

All townships are required by state law to transport all the children in the district to schools, regardless of whether they attend public or private institutions. However, if providing busing directly proves too expensive or too logistically difficult, the board can pay parents “aid in lieu” payments, which in Jackson comes to $1000 per child per year.

In previous years, families living in Jackson received the payments, but were left to arrange for their children’s transportation to school on their own. Many paid the aid in lieu payments to Lakewood Student Transportation Association (LSTA), a private consortium funded by the state that administers the far larger town’s private school transportation needs. Others used the money to pay for other private transportation options.

As Jackson’s private school population has steadily grown, Board and other officials decided that more money could be saved by providing transportation directly to children who attend certain schools that have a particularly high concentration of students in the town. Due to the program being merely a pilot, some schools may be grouped together on buses, and, in many cases, stops will be at central locations rather than at individual houses.

Jackson’s Business Administrator Michelle Richardson told local media outlets that the decision was a result of a yearly review of the costs of aid in lieu payments, and that it was based purely on estimates of what would prove the most efficient method for the town.

According to the Asbury Park Press, Jackson was responsible for the transportation of 800 students last year, including 279 who attend Orthodox schools in Lakewood. It also provided busing for 62 children who attend a Catholic school in Toms River.

Ms. Richardson said each year the town will continue to review its transportation costs and determine the most efficient means available.

Rabbi Schnall commended the Jackson BOE for their decision and urged parents to be patient with the results.

“This is a major undertaking on the part of Jackson BOE, and we need to recognize that it will take time. Patience is prudent,” he said. “With cooperation and proper communication this can be a success. But we need to mindful that there will be growing pains and challenges.”