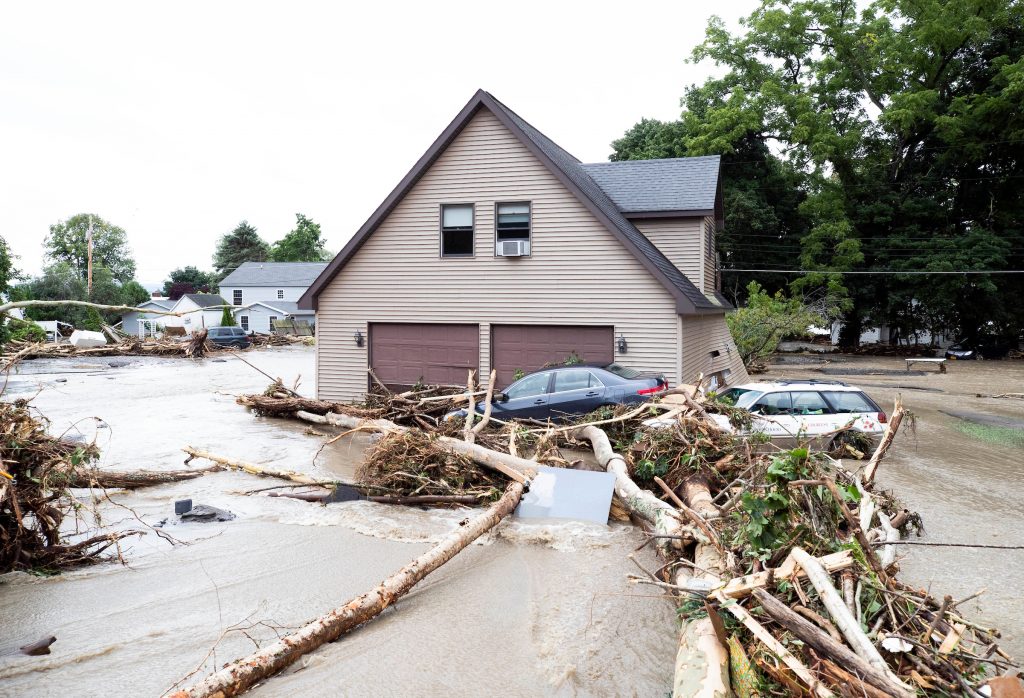 Dozens of people were trapped in their homes Tuesday by fast-rising water from flash floods caused by heavy pre-dawn downpours that drenched New York state’s Finger Lakes region, inundating roads and sweeping tons of trees, debris and a camper with a woman trapped inside into one of the lakes, authorities said.

The woman was rescued by a boater, and emergency crews were rescuing about 50 people trapped in their homes and evacuating others by boat on Seneca Lake, Seneca County officials and New York Gov. Andrew Cuomo said.

“It’s amazing, the devastation,” the Democrat said as he toured some of the hardest-hit areas late Tuesday morning, a few hours after heavy rains turned small creeks into overflowing rivers that devastated an area known for its scenery and wineries.

Gov. Cuomo declared a state of emergency for more than a dozen counties in the Finger Lakes region and along New York’s border with Pennsylvania. The declaration came after he toured damaged areas in Lodi, where he at one point climbed onto one of the massive piles of uprooted trees and brush blocking roads. Heavy construction equipment was brought in to remove the obstacles.

“There’s a sea of debris that is floating out there in the lake,” Cuomo said. “Propane tanks, sheds … I mean, it looks like a garbage heap floating in the water.”

The Seneca County Sheriff’s Office issued a no-unnecessary-travel alert after roads flooded in four towns between Seneca and Cayuga lakes. County officials declared a state of emergency in the towns of Covert, Lodi, Ovid and Romulus, about 150 miles west of Albany.

The National Weather Service said up to 5 inches of rain fell in that area, prompting a flash flood alert advising residents to seek higher ground.

There were no reports of fatalities or injuries.

Carolynn Shangraw, co-owner with her husband of the Sunset on Seneca campground in Lodi, told The Associated Press a woman was inside her camper when flood waters swept it downhill into Seneca Lake before sunrise.

Shangraw said the camper flipped over in the lake, trapping the woman inside, but she was rescued by a boater. A Seneca County emergency management official confirmed her account but couldn’t provide additional details.

Several other campers were displaced, numerous uprooted trees clogged the lake’s eastern shoreline and a campground creek that was dry Monday is now a river, Shangraw said.

“Our terrain has been restructured, let’s just say that,” she said during a phone interview. “It’s [a] gnarled mass of trees and roots in the road near my house.”

Walter Rudolph and his wife Nancy had 3 to 4 feet of water in one of the two homes that make up their Glass Magnolia Bed and Breakfast in neighboring Covert. He said he woke up around 5 a.m. and watched water course through his property for the next hour.

Rudolph said the flooding washed debris across his lawns and tore up his driveway, and his immediate neighbors all have damage to their property.

“We got whacked pretty good,” Rudolph told The Associated Press over the phone.

Video posted online showed the normally clear-running 156-foot-high waterfall in the village of Montour Falls, near Seneca Lake’s southern end, turned into an immense brown cascade threatening to overwhelm a nearby road.

The weather service has issued flash flood warnings for parts of the Finger Lakes and New York’s Southern Tier and bordering Pennsylvania counties, along with flash flood watches for upstate counties from central New York to New England.

New York’s flooding comes a day after heavy rains triggered flash flooding in parts of central and eastern Pennsylvania on Monday, closing a heavily traveled interstate and sending water into homes in the mountainous coal regions.