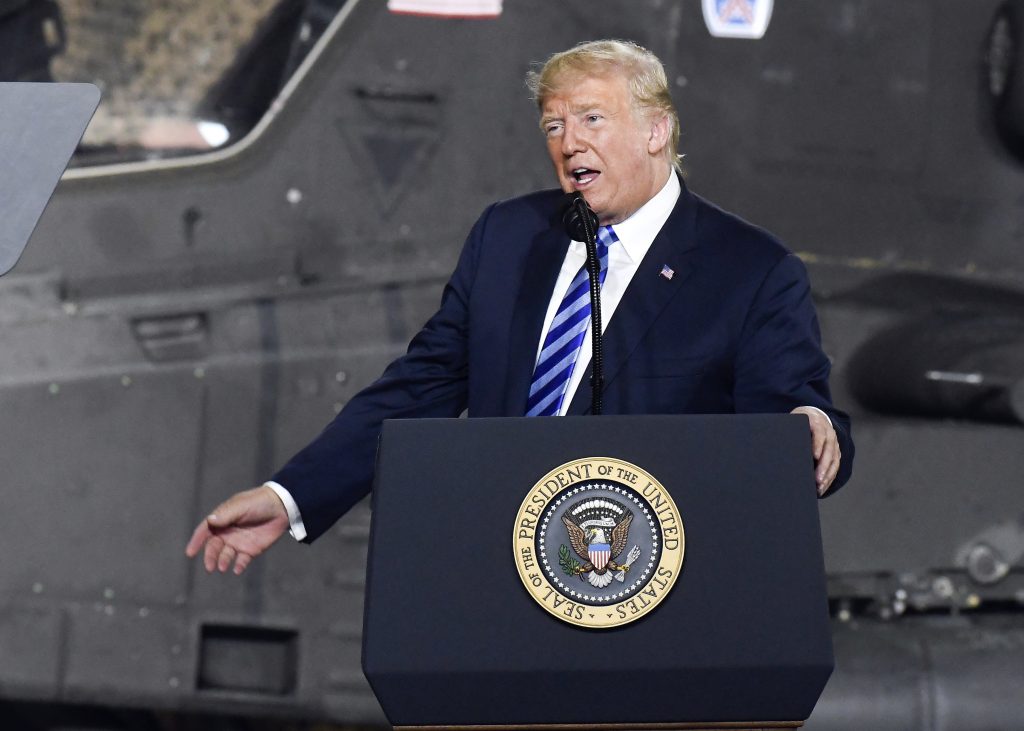 China on Tuesday blasted a U.S. military spending bill that calls for development of plans to help self-ruled Taiwan improve its defenses and warned of possible damage to cooperation in other areas.

The provision in the 2019 military budget authorization “is full of cold war thinking” and “interferes in China’s internal affairs,” said a Ministry of Defense statement. It said the measure “ruins the atmosphere” for military cooperation.

Beijing claims Taiwan, which split with the mainland in 1949, as part of its territory and has threatened to invade. Washington has no official relations with the island’s democratically elected government but is obliged by U.S. law to see that it has the means necessary to defend itself.

Taiwan is “the most important and sensitive core issue in Chinese-U.S. relations,” said the Defense Ministry statement. “We firmly oppose any official exchanges and military contacts between any country and Taiwan.”

A separate Foreign Ministry statement called on Washington to “avoid damaging Chinese-U.S. relations and cooperation in important areas.” It gave no details, but the two governments are working together on efforts to persuade North Korean leader Kim Jong Un to give up nuclear weapons development.

Beijing has stepped up efforts to isolate Taiwan internationally. It has ordered airlines, retailers and publishers to refer to the island as part of China on websites and in books and maps. It is lobbying the few countries that still recognize Taipei as a sovereign government to switch ties to Beijing.

The criticism adds to a series of U.S.-Chinese conflicts over tariffs, Beijing’s claims to the South China Sea and other irritants that have soured relations between governments of the world’s two biggest economies.

The measure expands the jurisdiction of a U.S. government security panel to screen foreign investments. That was proposed in response to concern Chinese corporate acquisitions might help Beijing obtain sensitive technologies and information.

The Chinese Commerce Ministry said it would study the law’s provisions and appealed to Washington not to use national security as an excuse to disrupt business. It called on U.S. authorities to treat Chinese companies fairly.

Other governments including Germany and Britain have expressed concern about Chinese acquisitions and are tightening investment controls.

It also puts restrictions on funding Chinese-language teaching by Confucius Institutes at U.S. universities and other educational institutions. They are affiliated with the Chinese Ministry of Education, which has prompted concerns about possible political influence in academics.

Trump signed the $716 billion defense-policy bill at Fort Drum, N.Y., Monday. The bill, H.R. 5515, is called the John McCain National Defense Authorization Act for the Fiscal Year 2019. But in his remarks at the signing ceremony, Trump included no mention of the Republican senator, who is battling brain cancer at home in Arizona.

Trump and McCain are engaged in a long-running feud that dates to Trump’s 2016 presidential run. At campaign rallies, Trump regularly castigates McCain — without using his name — for casting a dramatic thumbs-down vote that doomed Trump’s effort last year to repeal the Affordable Care Act.