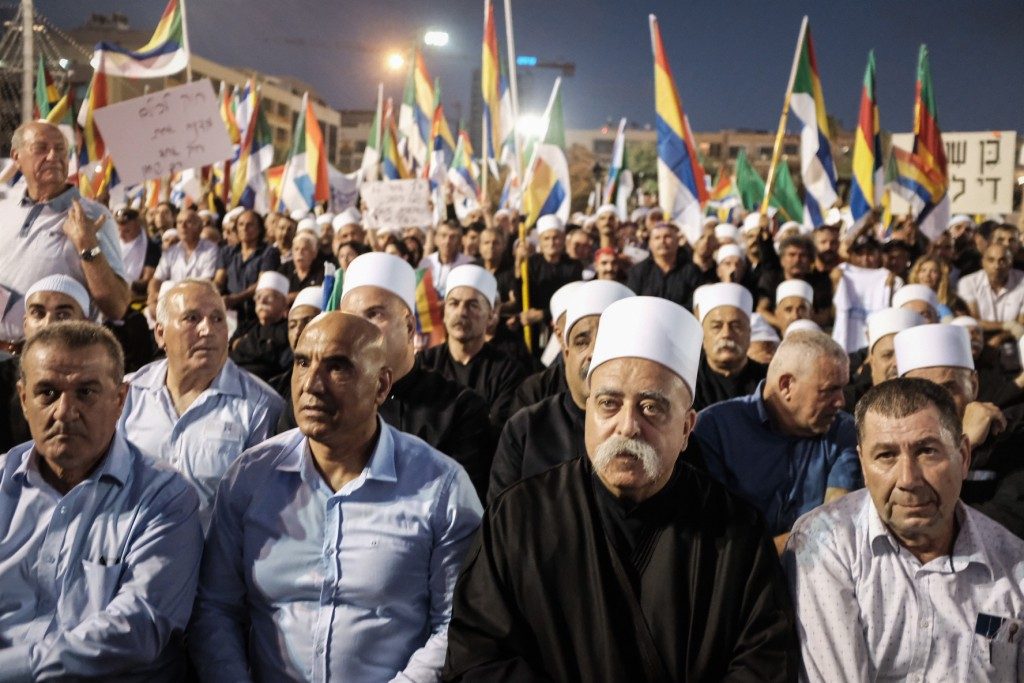 About twenty thousand Israeli Arabs and members of the Israeli Left came out on Shabbos to demonstrate against the Nation State Law. The law that essentially protects the status of Jews in the State that they established 70 years ago — disturbs them. Among the clauses of the law are the following issues that are making those who don’t like us here lose sleep:

For example, the Nation-State Law establishes the status of the State as the “nation-state of the Jewish nation,” its symbols, and its capital as “the united and complete Yerushalayim.” Likewise, the law gives the Hebrew language a special status above Arabic and determines that “the State sees the development of Jewish settlement as a national value.”

The first ones to protest were our Druze neighbors, who were indignant at the discrimination against them. It didn’t take long for the Israeli Arabs — who benefit from both worlds, having blue Israeli ID cards and all the benefits, as well as behaving like their brothers beyond the borders — to come out to protest this affront and discrimination.

Thus, in broad daylight, in Rabin Square, the official site of demonstrations in Israel for decades, scenes took place that no normal state would allow to pass quietly. The square was colored with Palestinian Authority flags, and shouts of “with blood and spirit we will redeem Palestine.” This shook even the rational people on the Left out of their complacency.

Ehud Barak, for example, wrote that “the organizers of this demonstration erred badly by allowing the waving of Palestinian flags and the calls of ‘blood and fire’…This is a free service for the initiators of the ‘assassination law’ against the equality clause established in the independence manifesto.” The chairman of the opposition, Tzipi Livni, also said that she was not participating in the demonstration because “some of the members of the United List are not partners to the view that the State of Israel is the nation state of the Jews.”

Moments before the demonstration began, hundreds of Arabs were seen falling on their faces in prayer.

During these same days, and indeed perhaps even at this hour, there are those who continue to kneel and bow their faces to the ground. But there is one difference: Someone is forcing them to do so. That someone — or something — is called the Palestinian Authority — whose flag was waving at the protest in Tel Aviv and which condones the sending of rockets to southern Israeli towns. “We don’t have more than three seconds to decide what to do. Our choice is to kneel and crouch down, or to kneel and crouch down,” said one worried mother from Sderot.

There is a lot of cloudy water separating the State of Israel and the State of Tel Aviv. The Tel Avivians do not understand and make no effort to recognize the suffering of the Gaza belt region that is paying a heavy price for being exposed on the border with the enemy. They — the enlightened residents of Tel Aviv — will continue the routine of their lives, they will host the Left and Israeli Arabs who will heckle them, while their brethren in the frontline towns are being pummeled mercilessly despite having done nothing wrong.

Apparently, while a decade has passed since the Sharon government implemented the Disengagement Plan, when the settlers were disengaged from the Gaza Strip and parts of Yehudah and Shomron, Israel still has not recovered from it. Since that time, it has been in the process of a long-term disengagement. Disengagement from its brethren who are suffering from rocket fire day and night.

It does not seem like one side will be able to understand the other, but the most offensive thing of all here is the Left’s recognition of the armed resistance. This is what the publisher of Haaretz, Amos Shoken, said on Motzoei Shabbos at the demonstration: “The right of equality was not anchored in the Personal Dignity and Freedom Law. The radical right, which leads the state, has not come to terms with it. The objective is clear: the Palestinian citizens will have fewer rights…You have the political power to mold the political dialogue in Israel by participating in elections. Use this power. I call on you to join the struggle against the liquidation of democracy and to establish true equality here.”

Prime Minister Binyamin Netanyahu did not remain silent in the face of this. He shared the photos from the shocking scenes in Rabin Square and wrote: “There is no better testimony to the necessity of the Nation State Law. We will continue to wave the Israeli flag with pride.”

This time, he is right.