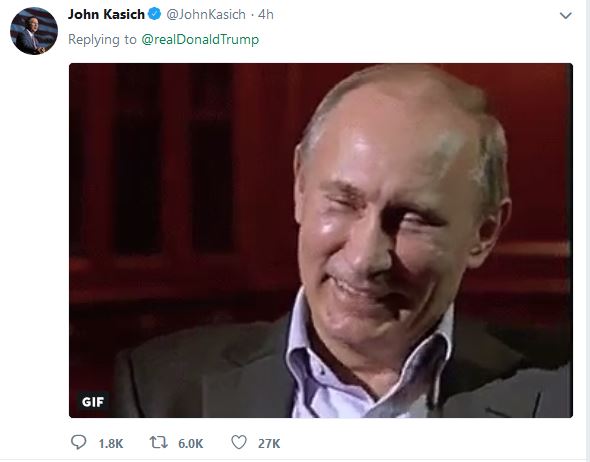 President Donald Trump on Monday blamed Ohio Gov. John Kasich for the lackluster performance of their party’s nominee in a heavily Republican district last week, in an apparent effort to counter critics of his own impact on the race.

President Trump made the comments in a tweet that came one day after Kasich, a potential 2020 presidential contender who is among Trump’s most prominent GOP critics, said in an appearance on NBC News’s “Meet the Press” that the nail-biter 12th Congressional District race was a warning from voters to the Republican Party.

“The very unpopular Governor of Ohio (and failed presidential candidate) @JohnKasich hurt Troy Balderson’s recent win by tamping down enthusiasm for an otherwise great candidate,” President Trump said. “Even Kasich’s Lt. Governor lost Gov. race because of his unpopularity. Credit to Troy on the BIG WIN!”

Troy Balderson, the Republican nominee, remains neck-and-neck with Democrat Danny O’Connor in the race, which has not yet been called nearly one week after voters went to the polls. Regardless who wins the special election, the two candidates will face each other again in November.

Trump swept into Ohio the weekend before the special election, and in a tweet last week, he sought to take credit for Balderson’s apparent victory.

Gov. Kasich responded to President Trump on Monday in a tweet that contained no words but featured a GIF of Russian President Vladimir Putin laughing.

A Quinnipiac poll in June showed Kasich far outpacing Trump in terms of approval among Ohio voters. Fifty-two percent of registered Ohio voters approve of the job Kasich is doing as governor, while 43 percent approve of Trump’s performance as president.