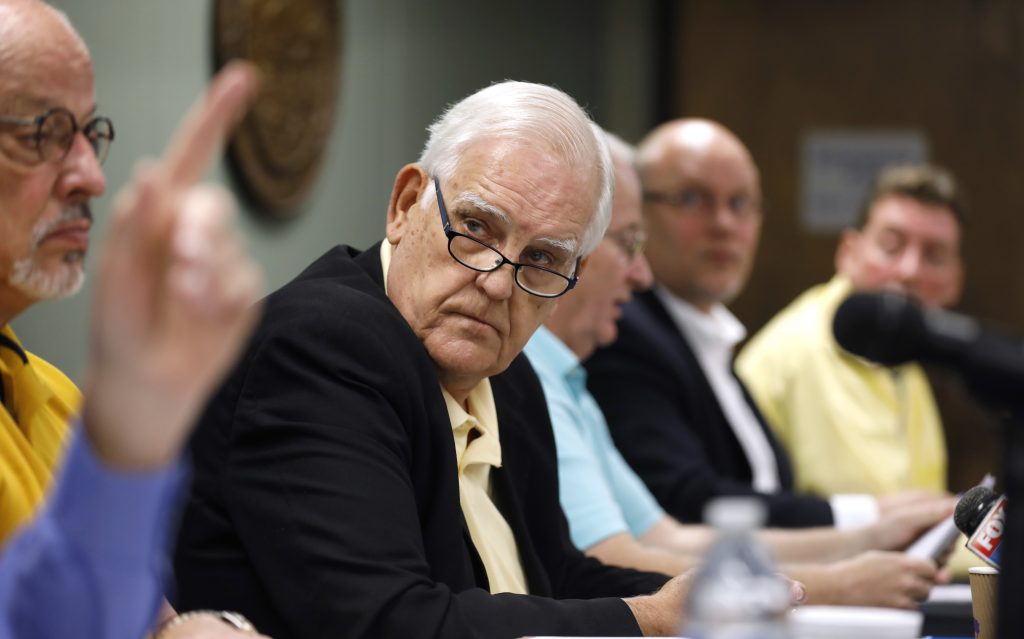 Kansas election officials began reviewing some 9,000 provisional ballots Monday from the state’s tight GOP primary for governor as the two candidates appeared to dig in for a long and potentially nasty legal fight that could take weeks to play out.

Secretary of State Kris Kobach led Gov. Jeff Colyer by a mere 110 votes out of more than 313,000 cast as of Friday evening. That was after late mail-in ballots were added to totals from absentee voting and ballots cast at the polls on Aug. 7.

The canvass began early Monday in suburban Kansas City’s Johnson County, where a board was set to review 1,800 provisional ballots which are given at the polls to voters when their eligibility is in question. Seventy-six counties were to start canvassing Monday. Some will meet later this week and next.

The disputed race seemed certain to intensify, with the candidates challenging each other’s legal interpretations, sending observers to monitor the vote count and raising the idea of lawsuits.

A new fight was brewing on how to count unaffiliated voters who were simply given a provisional ballot by poll workers without first having them fill out a party-affiliation statement. It was unclear how many ballots fell into that category.

A legal opinion issued Monday by the governor’s top attorney took issue with the guidance issued by the person Kobach appointed to oversee vote counters after he recused himself.

Assistant Secretary of State Eric Rucker told county election officials Sunday that if an unaffiliated voter did not first complete a declaration of party affiliation, that voter was not entitled to cast a ballot. The opinion from the governor’s office said provisional ballots cast by unaffiliated voters in a primary should be construed as evidence of voter intent and must be counted.

The counties have until Aug. 20 to finish the review of ballots.

With such a slim margin separating the candidates, the canvass will be closely watched. Colyer’s campaign on Friday announced plans to have representatives in all 105 counties when provisional ballots are reviewed.

Not all of the provisional ballots will affect the vote totals in the GOP primary. Some were cast in the Democratic primary, and others were cast by unaffiliated voters.

Attorney General Derek Schmidt is already considering the possibility that one of the candidates will file a lawsuit challenging the election results. He sent a letter to county election officials reminding them to preserve “any paper files, notes or electronic data related in any way” to the election.

Colyer has questioned whether Kobach was advising counties not to count some mail-in ballots, including those with missing or unreadable postmarks, even if they arrived by Friday, which Colyer said violates the law. He also said he heard reports that some unaffiliated voters — who by law can declare an affiliation at the polls and vote in a primary — were given provisional ballots instead of the regular ballots they were due.

In a letter Thursday to Kobach, Colyer wrote that circumstances “obviously increase the likelihood that one of the candidates may seek a recount, or even the possibility of litigation.”

Kobach rejected Colyer’s criticisms of the secretary of state’s actions.

“As governor of Kansas, your unrestrained rhetoric has the potential to undermine the public’s confidence in the election process,” Kobach wrote.

Kobach on Friday stepped aside from his duties as the state’s top elections official until the primary outcome is resolved, but Colyer argued that Kobach still has a conflict of interest because Rucker, his top deputy, is taking over Kobach’s responsibilities.

The secretary of state’s role in the actual counting of ballots is limited. His office provides guidance, compiles statewide vote tallies and provides general supervision.