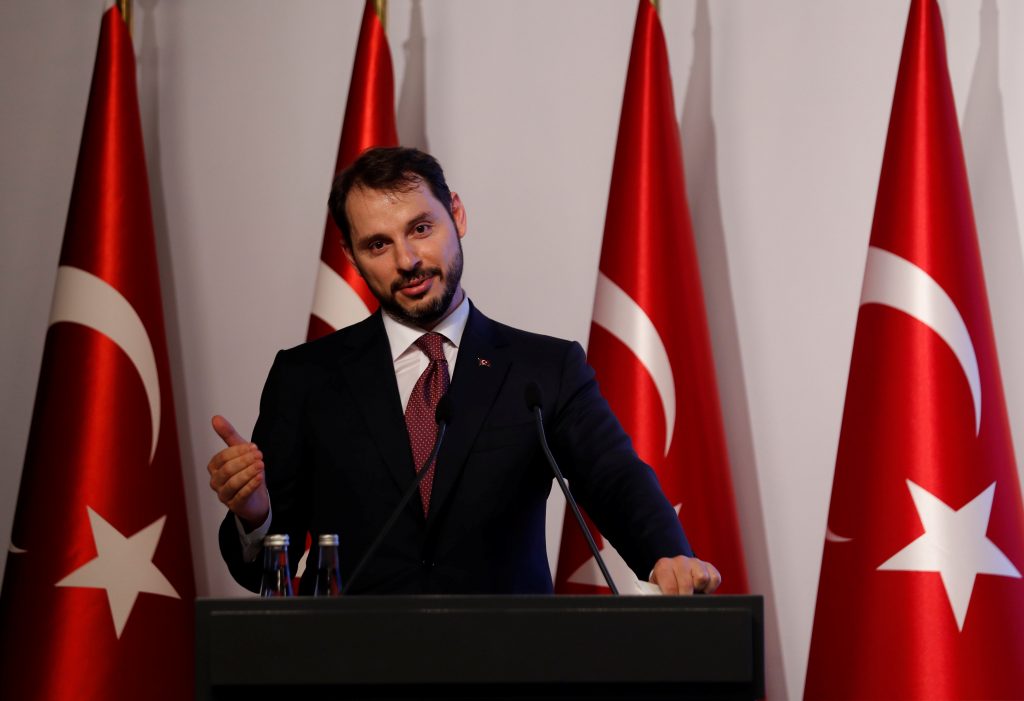 Turkey has drafted an action plan and will start implementing it on Monday morning to ease investor concerns, Finance Minister Berat Albayrak said on Sunday, after the lira plunged to a fresh record low in early Asia Pacific trade.

In an interview with Hurriyet newspaper published online, Albayrak described the lira’s weakness as ‘an attack’, echoing President Tayyip Erdogan, who is his father-in-law, but said the action plan was ready.

“From Monday morning onwards, our institutions will take the necessary steps and will share the announcements with the market,” Albayrak said, without giving details on what the steps would be.

Albayrak also said a plan has been prepared for banks and the real economy sector, including small to mid-sized businesses, which are most affected by the foreign exchange fluctuations. “We will be taking the necessary steps with our banks and banking watchdog in a speedy manner,” he said.

He has also dismissed any suggestions that Turkey might intervene in dollar-denominated bank accounts, saying any seizure or conversion of those deposits into lira was out of the question.

The lira plunged to a fresh record low of 7.24 against the dollar during in Asia Pacific trade, where markets were opening for Monday morning. It pared losses after Albayrak’s comments and stood at 7.08 at 2040 GMT Sunday.

The currency has lost more than 45 percent of its value this year, largely over worries about Erdogan’s influence over the economy, his repeated calls for lower interest rates in the face of high inflation, and worsening ties with the United States.

On Friday, the lira tumbled as much as 18 percent at one point, its biggest daily drop since 2001.

Earlier, Erdogan had stood by his opposition to high interest rates, saying they were an instrument of exploitation and that Turkey was not going to fall into this trap.

In the Hurriyet interview, Albayrak said budget policies were important to support and strengthen the central bank’s monetary policies. “We will be entering a strong period in terms of fiscal policies,” he said.

Erdogan, who has called himself the “enemy of interest rates”, wants cheap credit from banks to fuel growth, but investors fear the economy is overheating and could be set for a hard landing.

His comments on interest rates, and his recent appointment of his son-in-law as finance minister, have heightened perceptions that the central bank is not independent.

On Sunday, speaking to supporters in Trabzon on the Black Sea coast, Erdogan dismissed suggestions that Turkey was in a financial crisis like those seen in Asia two decades ago.

The lira’s free-fall was the result of a plot and did not reflect Turkey’s economic fundamentals, he said. “What is the reason for all this storm in a tea cup? There is no economic reason for this … This is called carrying out an operation against Turkey,” he said.

The central bank raised interest rates to support the lira in an emergency move in May, but it did not tighten monetary policy at its last meeting.

Erdogan repeated his call for Turks to sell dollars and buy lira to shore up the currency, while telling business owners not to stock up on dollars.

“I am specifically addressing our manufacturers: Do not rush to the banks to buy dollars. Do not take a stance saying, ‘We are bankrupt, we are done, we should guarantee ourselves’. If you do that, that would be wrong. You should know that to keep this nation standing is … also the manufacturers’ duty.”

Turkey’s row with the United States has further weighed on the lira.

The two NATO allies have been at odds over a wide range of issues: diverging interests in Syria, Ankara’s ambition to buy Russian defense systems, and more recently the case of Andrew Brunson, an evangelical pastor on trial in Turkey.

After Brunson had been in jail for almost 20 months, a court in July ordered him to be moved to house arrest. Since then U.S. President Donald Trump and Vice President Mike Pence have called for his release, while Ankara says the decision is up to the courts.

Washington in response sanctioned two Turkish ministers, and Mr. Trump on Friday announced the United States was doubling tariffs on steel and aluminum imports from Turkey, saying relations with Ankara were “not good at this time”.

Last week, a Turkish delegation went to Washington and met U.S. counterparts but there was no breakthrough.

On Sunday, Erdogan revealed details of talks between the two countries over the pastor, saying the United States had given Turkey until last Wednesday to hand him over.