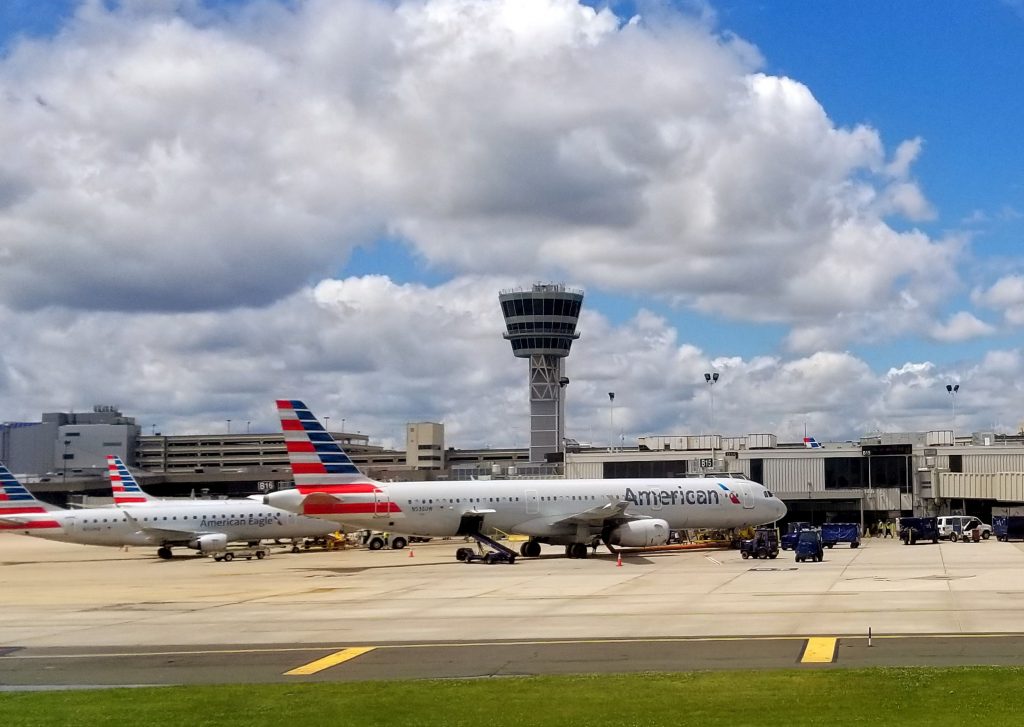 Richard S. Cardarelli only wanted to retrieve some eye drops from the carry-on bag he had just given an American Airlines employee at Philadelphia International Airport.

They weren’t just eye drops, either. They were medications necessary for his health, owing to a cornea transplant years earlier.

But the American Airlines baggage handler – who had taken the bag at the door of the jet aircraft because there was no room for carry-ons in the small plane – told Cardarelli that he couldn’t touch the bag again, even though it was still sitting in plain sight a few feet away on the boarding bridge.

An argument began, things became heated, and although Cardarelli got his eyedrops, he also got arrested.

And so began yet another battle over security apparatuses that sometimes abuse airline passengers in the name of keeping them safe.

Cardarelli, a Rochester, New York, contractor who died in January of pancreatic cancer, was eventually acquitted of criminal charges. But his widow wants to hold the airline accountable for the March 2017 incident. She has filed a lawsuit in the Court of Common Pleas in Philadelphia, seeking more than $1 million in damages and punitive charges.

“It was a nightmare,” Debbie Cardarelli said in an interview. Her lawsuit, filed in the spring on behalf of her and her husband’s estate, says the American Airlines baggage handler concocted a phony bomb threat out of spite after she and Cardarelli had argued over the eye drops.

The lawsuit accuses American Airlines of acting badly, too. In addition to its responsibility for its employee’s bad behavior, American Airlines refused to respond to legal subpoenas in the criminal case, thereby delaying Richard Cardarelli’s trial, the lawsuit says. It also says the airline barred him at the last minute from a flight from Rochester to Philadelphia to attend his criminal trial that day – even after the Cardarellis had called the airline in advance to ensure that there would be no problems.

American Airlines spokesman Matt Miller said the airline would have no comment on a matter that’s in litigation. Craig D. Mills, American Airlines’ attorney in the case, didn’t return a call or email seeking comment.

The Cardarellis’ unpleasant experience – whose story was told earlier by Philly.com – adds to a growing stack of complaints about alleged abuses by commercial airlines or the Transportation Security Administration (TSA) checkpoints passengers must pass through to board their flights.

For the Cardarellis, the nightmare began on the way home from vacation. The couple – who had been together 42 years – had celebrated his 59th birthday with a trip to Miami.

Their return required a brief layover in Philadelphia before catching a regional flight to Rochester aboard Flight 4081, which was operated by American Eagle, a regional partner of American Airlines.

As they prepared to board the 1:25 p.m. flight on March 24, 2017, they were told that there was no room for carry-ons. Richard Cardarelli handed his to an airline baggage handler identified in court papers as Tawanda Ward of Philadelphia.

He took no more than three steps toward the aircraft when he remembered the eye drops, and asked if he could retrieve them, his widow said. The bag was still on the boarding bridge floor at Ward’s side.

“I’m sorry, sir, but now that you’ve handed me the bag, you can’t have the bag back,” Debbie Cardarelli recalled her saying.

Richard Cardarelli tried to explain that the eye drops were critical for his health. After they began to argue, he headed back to the ticketing desk to appeal to someone else. He returned soon after with a ticketing agent, Debbie Cardarelli said.

The ticketing agent – identified in court papers as Marsha Batchelor – argued with Ward, too, until Ward threw up her hands and relented, Debbie Cardarelli said.

“I don’t care what you do with the bag,” Debbie Cardarelli recalled her saying.

Richard Cardarelli retrieved the eye drops and they took their seats aboard the aircraft with 44 other passengers. As the Cardarellis ate their lunch and watched from the window, Ward carried on as if she were still extremely angry, Debbie Cardarelli said. She said they saw Ward throw a pair of chocks used to immobilize aircraft wheels.

Twenty minutes or more passed while the plane sat near the gate, and some passengers began wondering what the holdup was.

Then a group of Philadelphia police officers boarded the plane, along with the same American Airlines ticketing agent who had intervened to retrieve the eye drops. Debbie Cardarelli said she thought the baggage handler must be in trouble, and the police needed a statement from them.

Instead, the police told her husband that he was under arrest and hauled him off the airplane in handcuffs. Everyone else had to evacuate the plane, while police K-9 teams searched the baggage and the plane for explosives. The flight took off after a substantial delay.

Meanwhile, Debbie Cardarelli said she became so worked up she vomited. Police refused to tell her why they were taking her husband off the plane, or where they were taking him. She began calling other family members for help.

“When I got the call, my initial reaction was, ‘Are you kidding?'” said Ashley Cardarelli, their daughter. She said the allegations later filed against her father just didn’t fit the man she knew.

“He gave everything and anything to other people,” she said. “It just was not even feasible.”

After a night in the city lockup, Richard Cardarelli was charged with disorderly conduct, making a terroristic threat and threatening to use a weapon of mass destruction. Bail was set at $25,000 cash, which was posted the next day.

When the trial date came around, after several court delays, the Cardarellis headed to the Rochester airport again, along with two character witnesses, for the flight to Philadelphia. The day before, the couple contacted American Airlines to make sure there would be no problem with Richard Cardarelli boarding the plane, Debbie Cardarelli said.

But when they reported to the gate at 5:30 a.m. on Oct. 26, 2017, Richard Cardarelli was denied boarding, Debbie Cardarelli said.

While he scrambled to book an alternative flight, she flew on to Philadelphia, along with her husband’s two character witnesses. He found a flight to New York City, where he rented a car and drove the rest of the way. He also missed most of the proceedings, having waived his right to attend and allowing the bench trial to proceed because his wife was there, she said.

Ward, the baggage handler, testified that Richard Cardarelli had threatened that his bag “would blow up.” But she also didn’t tell anyone about the purported threat for at least 15 minutes. That made no sense to Philadelphia County Court of Common Pleas Judge Vincent N. Melchiorre, who acquitted Cardarelli of all charges, the lawsuit says.

The criminal case cost the couple more than $20,000 in legal fees and other expenses, Debbie Cardarelli said. She also said the couple went into therapy after the incident, and her husband descended into depression so bleak that he attempted suicide because of what happened.

“She lied through her teeth,” Debbie Cardarelli said. “It’s so ridiculous what I’m going through just because someone lied.”