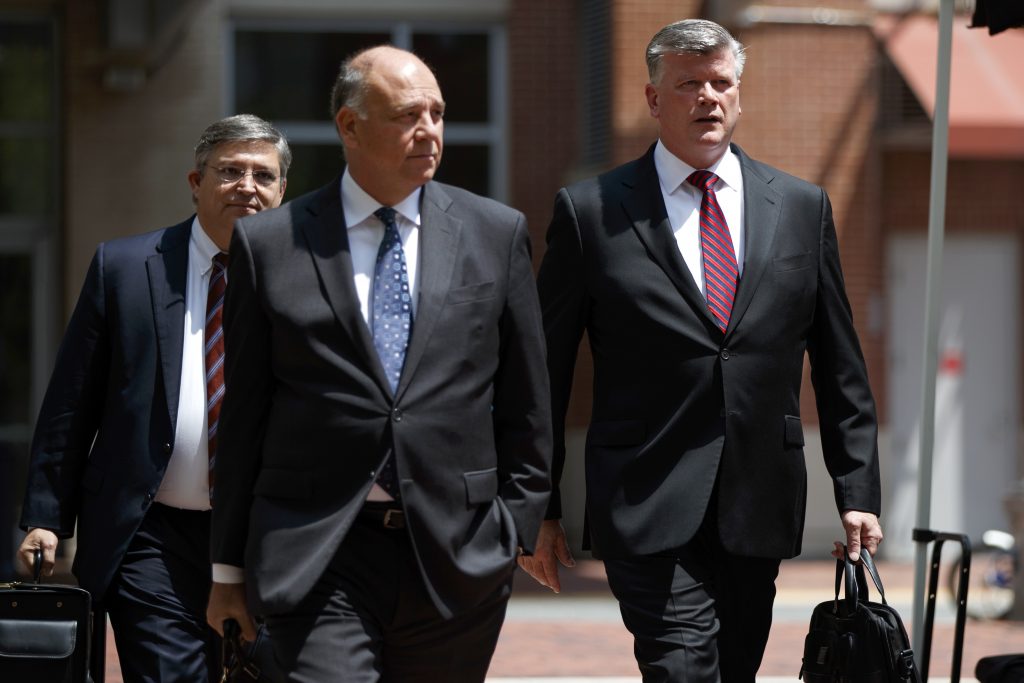 A New York bank executive testified Friday that Paul Manafort received more than $16 million in loans after the bank’s chairman expressed interest in joining Donald Trump’s Cabinet if he won the 2016 presidential election.

The testimony in the former Trump campaign chairman’s financial fraud trial came after proceedings were halted for hours by mysterious backstage discussions between the judge and attorneys for both sides. Prosecutors now say they will wrap up their case against Manafort on Monday. Defense lawyers have not said whether they expect to call any witnesses after that.

It was a strange hiccup in nine days of proceedings that have been sometimes dramatic and featured tense exchanges between prosecutors and admittedly impatient U.S. District Judge T.S. Ellis III as he has pushed the government to speed up its case.

Ellis recessed the trial without explanation after huddling with his bailiff and attorneys from special counsel Robert Mueller’s office and Manafort’s lawyers for more than 20 minutes.

At one point, Ellis left the courtroom and headed toward the jury room. After bringing court back into session, he reminded jurors several times that they weren’t to discuss the tax evasion and bank fraud case at all. That included telling them to not even comment on the attire of any witnesses.

The exchange came during a day in which jurors heard detailed testimony about Manafort’s bank loans and about his New York Yankees luxury season ticket purchases — paid for from an offshore account that prosecutors say he concealed from the IRS.

Dennis Raico, an executive at Federal Saving Bank who testified under an immunity agreement, detailed for jurors how he grew uncomfortable by the actions of bank chairman Stephen Calk in the handling of Manafort’s loans. Prosecutors have said that despite red flags, Calk pushed through the loans for Manafort because he wanted a job in the Trump administration.

During his testimony, Raico told jurors that Calk discussed roles in the Trump campaign ahead of approving the loans and later specifically referenced being a candidate for Secretary of the Treasury or Housing and Urban Development in messages he wanted Raico to pass to Manafort. Raico said he didn’t relay Calk’s messages because he thought they were inappropriate.

Raico told jurors that a committee that Calk led approved Manafort’s loan within one day. Raico also said Calk approved one of the loans, worth $9.5 million, after overruling the bank’s president, who had expressed doubts that Manafort had enough income to pay back the debt.

Raico said that approval came despite underwriters finding several discrepancies between the income on Manafort’s tax returns and the figures contained on financial statements he provided to the bank.

“A plus B didn’t equal C all the time,” Raico said of the discrepancies.

In previous testimony, witnesses have described other problems with documents Manafort submitted in attempts to obtain loans. And on Friday, prosecutors zeroed in a letter he submitted to explain a $300,000 balance on his American Express card.

Manafort had provided the bank with a letter saying he lent the card to his longtime deputy, Rick Gates, so Gates could buy about $300,000 in season tickets. But Irfan Kirimca, a senior director of ticket operations for the New York Yankees, told jurors the team had no record of Gates’s ever making such a purchase.

Kirimca also testified that Manafort paid for luxury season tickets to the Yankees using an offshore bank account in the name of Global Highways Limited, one of the offshore shell companies prosecutors say Manafort failed to report on his tax returns.

Friday’s proceedings also featured a lighthearted moment between Ellis and prosecutor Greg Andres, who have tangled during the trial.

While questioning a witness, Andres noted he had forgotten to admit a document into evidence when he should have, prompting Ellis to retort, “Confession is good for the soul.”

Andres responded, “I think my soul is in pretty good shape after this process,” prompting laughter in the gallery.

The developments Friday came after jurors had endured testimony that sometimes ventured into the tedium of bank and tax records. The prosecution is the first to emerge from Mueller’s investigation into Russian meddling in the presidential election, but neither Manafort nor Gates has been charged in connection with their Trump campaign work.

The prosecution has called more than 20 witnesses, including Gates, and introduced a trove of documentary evidence as they’ve sought to prove Manafort defrauded banks and concealed millions of dollars in offshore bank accounts from the IRS.