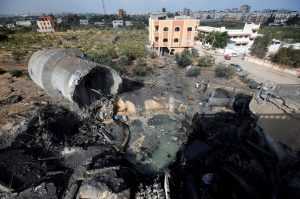 Overnight Wednesday, the IDF denied that it was set to engage in an expanded operation against Hamas, as the Gaza terror group slammed southern Israel with hundreds of missiles, but by Thursday morning the picture had apparently changed. A senior IDF official was quoted in Ha’aretz as saying that the army was on the verge of a “major offensive” in Gaza, and that this time it intended to end the ongoing attacks by Hamas – and, if necessary, it would evacuate Jewish towns in the Gaza border area to give itself the operational freedom it needed for a major campaign.

“We are after a very difficult night of tension, and at this point we do not see where and how it will end,” the official said. “Hamas has chosen to move away from the path of negotiations that it was engaging in, and it will pay the price for the attacks it has conducted over the past four months. If Hamas does not begin to realize what they are likely to lose if we really do go to war, they should realize they will be beaten very badly.”

The IDF has placed thousands of soldiers on alert, and moved thousands more down south in order to prepare for the eventualities. “If we have to, we will interrupt the summer plans of Israelis. We are definitely prepared if needed to evacuate civilians within four kilometers of the border, even at the first stage of a lengthier campaign,” said the official. So far, a reserve call-up has been conducted only in the Air Force, but plans are at the ready for a wider-ranging call-up, the official added.

In addition, the source said, the IDF would continue its campaign against Hamas terror installations. “Overnight Wednesday we hit about 150 Hamas targets,” said the source. “We destroyed several very strategic assets. The targets that we had previously selected to be destroyed have indeed been destroyed.”

Speaking Thursday, Alon Davidi, mayor of Sderot, which was hard hit in the overnight barrage, said that his city was ready to make sacrifices in order to end the attacks. “We are ready to help out in any way in order to ensure that quiet returns to this region,” he added.