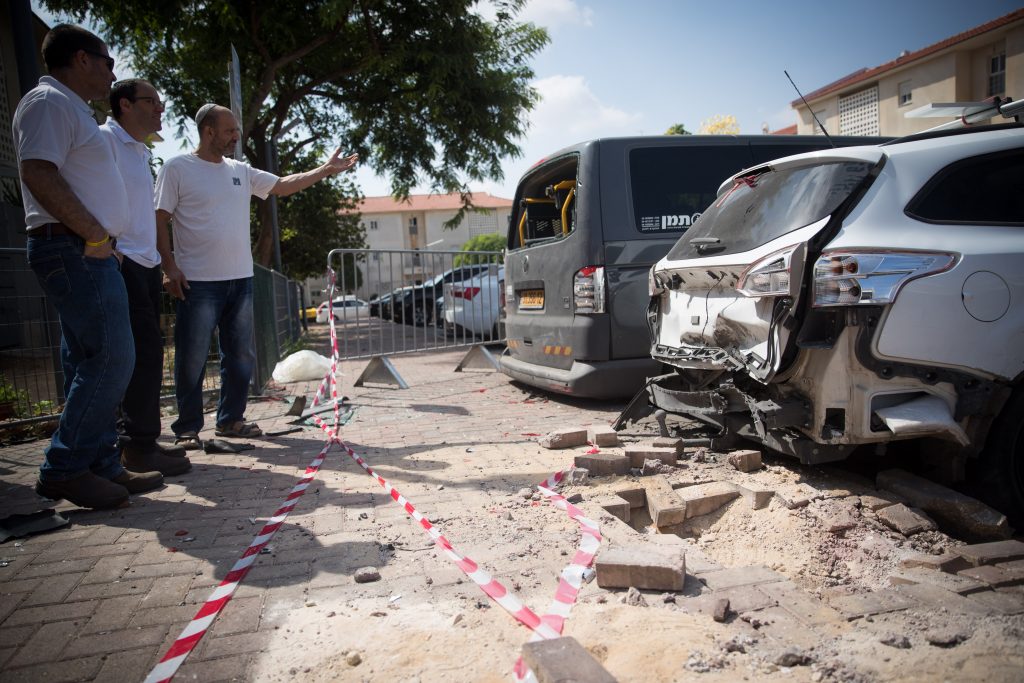 The tension in Gaza showed no signs of abating Thursday, as Hamas terrorists continued to slam southern Israel with missile attacks. As of 10:00 a.m., well over 200 missiles had been fired at Israeli communities by Gaza Arab terrorists. Forty of them were exploded in mid-air by the Iron Dome anti-missile system. Another 171 fell in Israel, mostly in open areas. Red Alert sirens sounded throughout the night Wednesday into the early hours of Thursday morning, as Gaza Arab terrorists continued their assault on southern Israel. Sirens continued to sound throughout the morning on Thursday.

Twelve people were injured in the attacks, among them a female foreign worker who was badly injured, as the IDF hit dozens of Hamas terror targets – over 100, according to the IDF – among them a terror tunnel dug under the ocean bed off the Gaza coast. One of the targets was a factory that produced concrete that was used in the construction of terror tunnels, that was operating under the guise of a site for the construction of a new hotel. Also targeted was a vehicle carrying three senior Hamas terrorists, whom sources in Gaza said were killed in the Israeli retaliation.

Among the targets of the terrorists was the city of Netivot – the furthest Gaza terrorists have fired missiles in the latest round of fighting that has plagued southern Israel. Of the dozens of rockets fired at Israel, the large majority fell in open areas, but some caused damage in homes and factories. One missile fell in a factory in the Sha’ar Hanegev Regional Council, causing significant damage. Eleven rockets were shot down by the Iron Dome anti-missile system.

Prime Minister Binyamin Netanyahu called a rare late-night meeting of the Security Cabinet late Wednesday to discuss Israel’s response to the latest Hamas provocations. In a statement, the IDF spokesperson said that “the IDF attacks on Gaza were prompted by missile fire and shooting from Gaza earlier in the day. Hamas is continuing its terror campaign against Israelis and the IDF. Hamas is responsible for everything that happens in Gaza, and that includes being responsible for the terror that is being committed against Israeli civilians.”