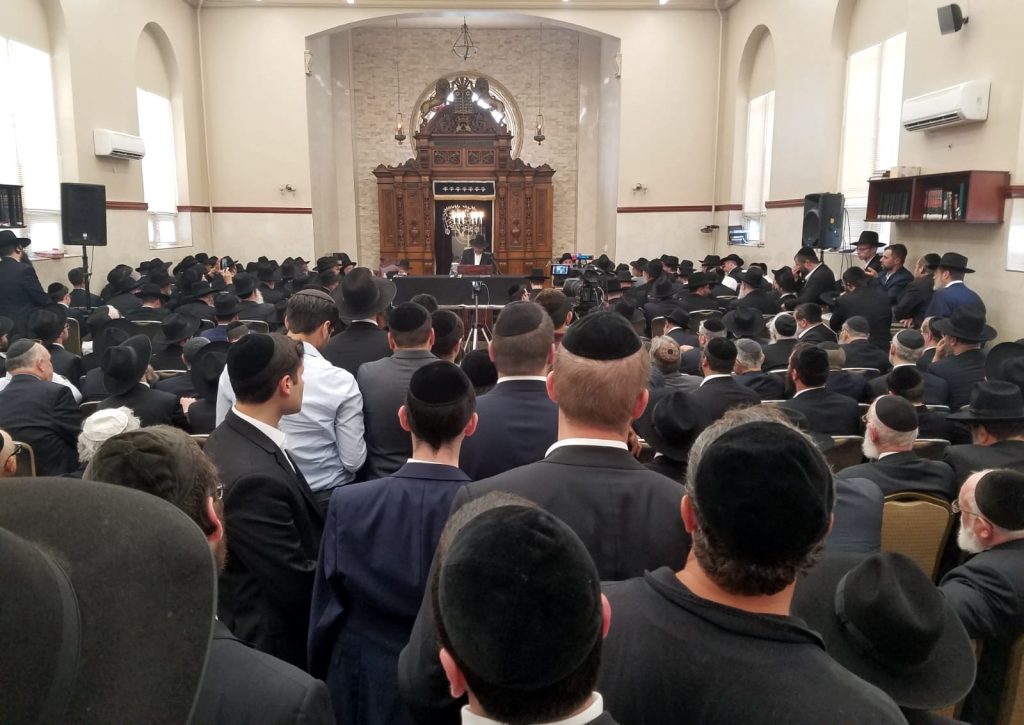 Hundreds gathered Thursday morning to mourn the petirah of Rebbetzin Sheila (Chava Sarah) Feinstein, a”h, the wife of, ybl”c, Harav Reuven Feinstein, shlita, who was niftar on Wednesday night, 28 Menachem Av. She had been hospitalized for the past two weeks following serious injuries suffered in an automobile accident. The Rebbetzin was in her late 70s.

At the levayah, held at the Yeshivah of Staten Island, Rav Reuven spoke of his late Rebbetzin’s great dedication in her essential role in enabling his own growth and decades of harbotzas haTorah.

“She supported me … she was mechazek me and took care of the whole olam hazeh part of my life,” he said.

With a commanding and regal presence, joined with exceptional intelligence and wit, Rebbetzin Feinstein’s dynamic personality propelled her to be one of the pillars upon which her husband’s yeshivah stood, and to be among the most trusted and loyal assistants to her revered father-in-law, Harav Moshe Feinstein, zt”l. At the same, she was a highly respected educator for many years in New York City’s Public School system and later in several mosdos haTorah.

The Rebbetzin grew up on Manhattan’s Lower East Side, where her parents, Reb Avrohom, z”l, and Mrs. Ita Devorah Kaplan, a”h, resided. She was a student in the very first class of the neighborhood’s Bais Yaakov, and took great pride in having remained steadfast in her commitment to Yiddishkeit at a time when many of her peers succumb to the rampant assimilationist trends that prevailed at the time.

Even while pursuing higher education, when challenged by classmates or professors, young Sheila, with signature strength and down-to-earth logic, never shied away from standing up for her beliefs.

In the early 1960s, she would marry Rav Reuven, ybl”c, Rav Moshe’s youngest child, who by then had already distinguished himself for his great dedication and mastery of Torah. Despite becoming the daughter-in-law of one of the Gedolei Yisrael, the decision to marry a talmid chacham and to take a role in supporting his years of study in kollel was hardy a popular or easy one at the time.

In addition to her key role in aiding her husband’s growth, the Rebbetzin increasingly became one of the main caregivers to Rav Moshe and his wife in their later years. Living in an apartment nearby, the Rebbetzin became a regular presence in the home of the elder Feinsteins, doing all she could to assist her father-in-law, relating that she hand-sewed the robe he often wore around the house.

In 1966, Rav Reuven opened a branch of Mesivtha Tiferes Jerusalem (MTJ) in Staten Island, widely known as the Yeshivah of Staten Island. Despite the many responsibilities of her family and professional life at that point, the Rebbetzin played an active role in seeing to it that the physical amenities of the yeshivah should be such that its talmidim would be able to focus entirely on their studies. With a keen eye for detail and an understanding of the challenges faced by a young bachur away from home, she saw to it that particulars like the menu and other comforts were such that the talmidim should feel cared for and nurtured. It is due in no small part to the Rebbetzin’s dedication that the yeshivah has long been one of Klal Yisrael’s noted mosdos haTorah.

For many years, the Rebbetzin worked an elementary-school teacher in New York public schools. Even in the increasingly challenging culture of the city’s educational system, her majestic and forceful bearing garnered great respect. She would go on to be appointed a principal, a position that she successfully occupied for many years. As when she was a classroom teacher, while maintaining discipline and high academic standards, she also exuded a sincere sense of caring and devotion to the pupils in her charge. In the decades she spent in the public school system, the Rebbetzin not only raised performance levels in her schools, but was a source of widely recognized kiddush shem Shamayim with her intellect and integrity.

Even after retiring from her position in the public schools, the Rebbetzin served for many years as the general studies principal at the girls’ division of Yeshivat Shaarei Torah in Flatbush and afterward as curriculum advisor at MTJ’s Lower East Side location. At both mosdos, the Rebbetzin took on her role with tremendous dedication, seeing to it that the schools were run in a way that would best accommodate the student body and made herself readily available for, staff, parents, and talmidim alike.

As in her professional life, when dealing with family and the broader community, the Rebbetzin took a strong and sharp, yet loving approach.

“To read Eishes Chayil, it’s all about you,” her son, Harav Dovid Beinish Feinstein, said in his hesped. “My father … once spoke about how people do chessed because … [on some level] they want something back. My mother did chessed shel emes for everybody.”

On July 24, the Rebbetzin and Rav Reuven were in a car accident. Rav Reuven suffered relatively light injuries, while the Rebbetzin was hospitalized and listed in serious condition. Soon after the incident, initial reports had been optimistic for her recovery, but in recent days, she took a turn for the worse and was niftar late Wednesday night.

Following the levayah in Staten Island, the aron was flown to Eretz Yisrael for kevurah on Har Hamenuchos.

The Rebbetzin is survived by, ybl”c, her husband Rav Reuven, sons Harav Dovid Beinush and Harav Avrohom, daughters Rebbetzin Malka Eisenberg and Rebbetzin Ahuvah Weiss, as well as by many grandchildren and great-grandchildren.