Technology Plumcots, Apriums and Pluots: How to Keep Track of All Those Hybrid Fruits
Health, Science & Technology 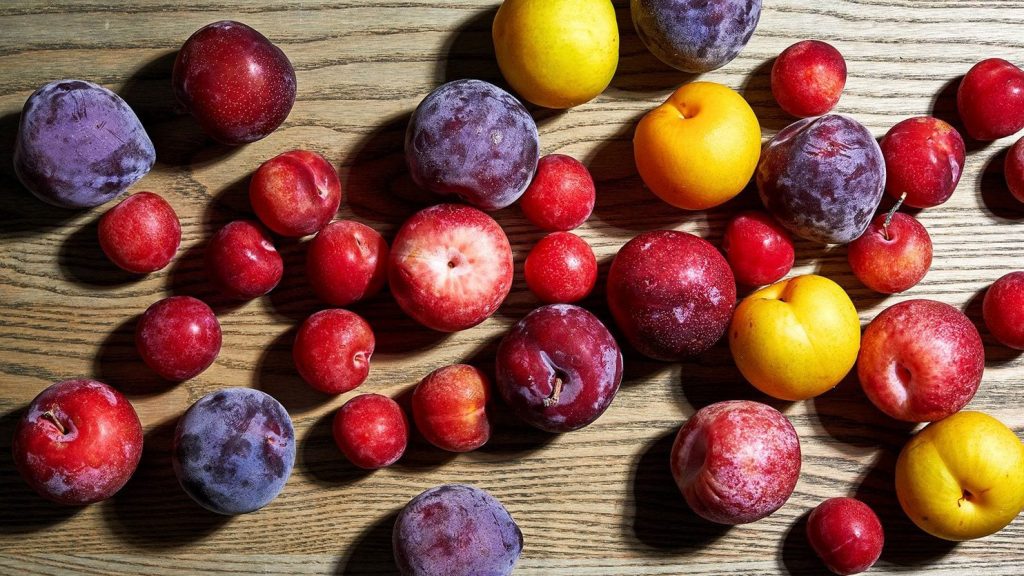 The choice presents itself to you in the produce aisle like a word puzzle. There are pluots and plumcots and apriums, in shades of green and purple and orange that suggest either – or neither – plums or apricots. In this bizarre Venn diagram of late-summer Frankenfruits, which will you choose?

Here’s a quick breakdown of the differences:

– Plumcots are 50-50 crosses between plums and apricots.

– Apriums are more apricot than plum and tend to have slightly fuzzy skins.

– Pluots (pronounced plew-oughts) are more plum than apricot and have smooth skin.

These aren’t genetically modified, either – they’re the result of natural breeding.

But there’s more to it than just percentages. Within each category, there is variety – more than a dozen plumcot or pluot breeds such as the “Dapple Dandy” or the “Flavor Grenade,” all of which have a different flavor, appearance and fleshy interior color. They can be purple with orange spots and bright red flesh, or green on the outside and yellow on the inside, and they’ll still be a plumcot.

The plumcot is attributed to California horticulturalist Luther Burbank, who experimented with cross-pollinating the plants in the late 1800s. Horticultural geneticists have also crossbred plumcots with certain types of plums or apricots to bring out other characteristics, including sweetness or a certain color of flesh or durability. In the 1980s, fruit breeder Floyd Zaiger created the pluot, crossbreeding plumcots with plums to boost the plum flavor. He later trademarked the terms pluot and aprium as well as the “NectaPlum® (nectarine-plum), Peacotum® (peach/apricot/plum), Pluerry™ (plum-cherry).” Only the varieties developed by the Zaigers can carry these names.

But all of these crossbreeds have created consumer confusion: In the case of pluots, the name is hard for people to pronounce and spell, and it’s hard for the average consumer to tell the difference between pluots and plumcots. If you heard both of those names, which one would you assume was more plumlike? Probably not the pluot.

“We used to get emails that were like, we want to try your plutos, or your plouts,” Plain said. The farm has been leading the charge in changing the industry’s standard name from pluot to plumcot, which is easier for both customers and marketers.

But that won’t answer all of the questions that shoppers might have in the grocery store.

“What’s challenging for consumers is that they all look a little different; they’re only in stores for three or four weeks sometimes,” Plain said. “They get in their head what they think a plumcot is, and they go back and they don’t see it.”

At our local Trader Joe’s and Whole Foods, there were two types of pluots, one type each of plumcots and apriums, and also some plum cherries. One pluot was bright green and the other was light purple, while the apriums, counterintuitively, were the darkest-colored fruit. The apriums were the sweetest of the bunch, too, and the green pluots were the most plum-like.

Family Tree Farms also has a proprietary variety of plumcot, grown only on its farm. It has “a deep, dark red-purple flesh to it, and it’s high in antioxidants,” Plain said. Because of its appearance and nutrition, when it came time to name the fruit, the farm had the perfect idea – though, not exactly one that aids in its goal of decreasing consumer confusion about hybrid fruits. It’s called the plumogranate. It does not actually come from pomegranate, though perhaps that could be a fascinating project for the next aspiring horticultural geneticist.

“The way we explain it to people is, think of cherry tomatoes,” Plain said. “It’s not a cross of cherry and tomatoes.”