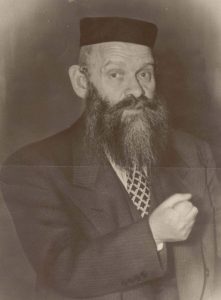 Hagaon Harav Moshe Feinstein, zt”l, referred to him as “the father of all bnei Torah in America of this generation and all the generations to come.” Yet, though he received semichah from the famed Be’er Shmuel of Unsdorf, Harav Shraga Feivel, zt”l, insisted on being called “Mr. Mendlowitz.”

This coming Tuesday marks the 70th yahrtzeit of this legendary figure, the founder of Mesivta Torah Vodaath, Beis Medrash Elyon and Torah Umesorah, who also played a key role in the establishment of many other yeshivos and organizations.

Rav Shraga Feivel was much more than a visionary. He wasn’t merely an architect and builder of Torah in America; he personally embodied the highest spiritual ideals. He gave profound shiurim on nearly all of Tanach, and his knowledge of sifrei chassidus and sifrei mussar was extraordinary. For those who merited to learn under his watchful eye and bask in his presence, it was a life-transforming experience. Many of his talmidim went on to have an enduring impact on their own talmidim, and they in turn on theirs, ensuring that Rav Shraga Feivel’s influence continues to enrich the lives of countless Jews in our generation.

But it is his accomplishments on behalf of Klal Yisrael that obligate us all to owe him a great debt of gratitude.

The Satmar Rebbe, Harav Yoel, zy”a, said of him, “Reb Feivel planted the first seed of Torah in America, and from this seed everything grew. … Only thanks to this first planting was it possible for those who came later to spread Torah and Yiddishkeit here.”

The Skverer Rebbe, Harav Yaakov Yosef, zy”a, similarly said that “Reb Feivel created the possibility for yirei Hashem to be able to live in this land. If not for his great accomplishments, it would not be permitted for shelomei emunim to live here.”

Harav Nesanel Quinn, zt”l, one of Harav Shraga Feivel’s closest talmidim, was once asked what was the greatest feat that was accomplished by his great Rebbi.

When Rav Mendlowitz decided to establish the mesivta, he faced enormous opposition. People told him that it was a crazy dream, that it was simply not possible to create a yeshivah in America along the lines of the great yeshivos in Europe.

With incredible mesirus nefesh, he persevered and accomplished the impossible.

After steadily building up the mesivta for three years, he wanted it to reach even higher levels in Torah and avodas Hashem. In his great humility, Rav Mendlowitz decided that it was time to bring in someone else — someone “better” than he, someone who could bring the mesivta to an even higher level. He invited Harav Moshe Dov Ber Rivkin, zt”l, a noted mechanech from Yerushalayim, to take his place as Menahel of the mesivta he had founded.

To support his family, Rav Mendlowitz became an insurance salesman. He continued to give shiurim in his house to a group of his closest talmidim who refused to part with their beloved Rebbi, davened with the mesivta every morning and stayed acquainted with everything that went on. But he did not intervene at all in the running of the mesivta.

In the eyes of Rav Quinn, to be able to walk away from something he had been moser nefesh to establish because he felt that someone else could run it better than he was Rav Mendlowitz’s greatest feat.

(In the end the arrangement lasted only two years, as it soon became obvious that although Rav Rivkin was a master mechanech, Rav Mendlowitz’s absence was sorely felt. The directors of the mesivta came to him and insisted that he return. Rav Mendlowitz initially refused to do so out of concern for the honor of Rav Rivkin.

Eventually the matter was settled with a compromise: Rav Rivkin became the Maggid Shiur for the highest level of the mesivta, and Rav Mendlowitz resumed his position as Menahel.)

When Hagaon Harav Aharon Kotler, zt”l, established what would later become Bais Medrash Govoha in Lakewood, N.J., Rav Shraga Feivel, or “Mr. Mendlowitz,” as he insisted on being called, sent the 10 best bachurim from Torah Vodaath to create a nucleus of talmidim there.

The Maggidei Shiur at Torah Vodaath, understandably concerned about the detrimental effect this would have on their own yeshivah, expressed their concern. Rav Shraga Feivel replied with a Chassidic thought:

“The Apta Rav, zy”a, said that if he were asked whether he wished to change places with Avraham Avinu, he wasn’t sure if he would accept. For what will the Ribbono shel Olam have out of it? He would still have one Avraham Avinu and one Apta Rav. If the Torah is being learned,” Rav Shraga Feivel concluded, “what difference does it make whether it is in Reb Aharon’s yeshivah or in Torah Vodaath?”

It was with this incredible selflessness, devoting himself solely for the sake of Hashem without even the minutest self-interest, that he was able to accomplish the unthinkable and achieve the impossible.

As we enter the month of Elul, let us take a moment to ponder and be inspired by the example of “Mr. Mendlowitz.”