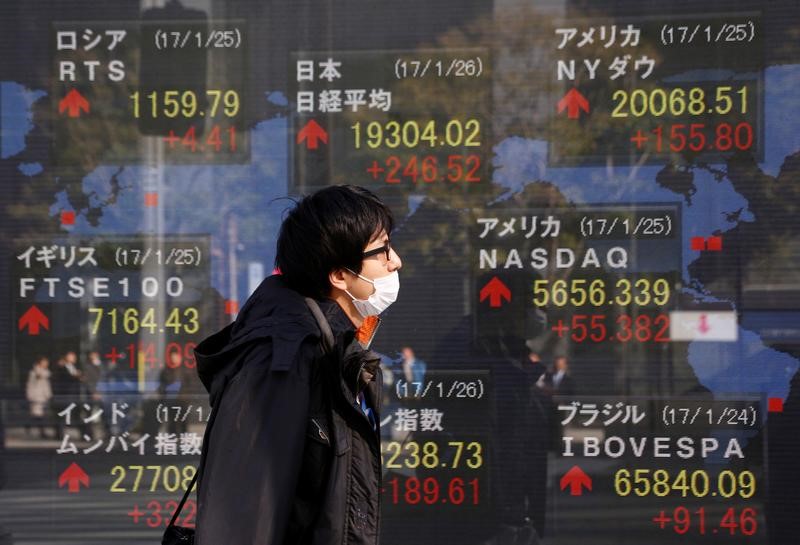 A rebound in battered Chinese stock markets on Monday helped lift Asian equities, which also drew support from earnings-led gains on Wall Street in a welcome relief for investors grappling with an intensifying Sino-U.S. trade conflict.

MSCI’s broadest index of Asia-Pacific shares outside Japan was up 0.35 percent.

The Shanghai Composite Index rose 1.4 percent as investors snapped up shares that were hit hard during a four-day losing run.

The three major U.S. stock indexes closed higher on Monday amid a strong U.S. earnings season, with results from Berkshire Hathaway impressing and Facebook lifting the Nasdaq after a report it was planning new services.

“Global markets are [being] buffeted by conflicting currents. The bottom-up view of the world from a corporate perspective is positive, led by U.S. companies,” wrote Michael McCarthy, chief market strategist at CMC Markets.

“However, the increasing potential for trade disputes to slow the global economy is restraining investor enthusiasm.”

The dollar drew support from the persistent international trade tensions. Its index against a basket of six major currencies rose to a near three-week high of 95.515, before pulling back slightly to 95.335.

Some analysts see the trade conflict benefiting the U.S. dollar as the nation’s economy is better placed to handle protectionism than emerging markets, and as tariffs may narrow the U.S. trade deficit.

Weakness in its peers further bolstered the dollar.

The euro fell to a five-week low of $1.1530 overnight, weighed down by worries that Italy could ramp up spending and challenge European Union budget regulations and by a drop in June German industrial orders. The single currency last traded at $1.1556.

The pound was also on the back foot, driven on Monday to $1.2920, its weakest since September 2017, after comments by officials raised fears Britain would crash out of the EU without securing a trade agreement. Sterling stood at $1.2944.

The dollar was steady at 111.33 yen after edging up 0.1 percent overnight.

A big mover was the Turkish lira, which struggled near a record low plumbed on Monday after Washington said it was reviewing Ankara’s duty-free access to the U.S. market as tensions between the two NATO allies ramped up. The lira has lost 27 percent of its value this year, battered primarily by concerns about President Tayyip Erdogan’s drive for greater control over monetary policy.

“Currently the impact of the lira’s slide is mostly contained within the country. But fears of a default will begin to increase if the currency keeps depreciating, and such a development could affect some European financial institutions,” said Kota Hirayama, senior emerging markets economist at SMBC Nikko Securities.

“The Turkish central bank will have to move quickly and raise interest rates to arrest the lira’s fall before it becomes too late.”

In commodities, oil extended the previous day’s rally after the imposition of U.S. sanctions against major crude exporter Iran took effect on Tuesday.

Benchmark Brent crude oil futures shook off earlier weakness and were 0.33 percent higher at $73.99 a barrel. They had gained 0.75 percent on Monday after OPEC sources said Saudi production had unexpectedly fallen in July.

Copper struggled under the combined weight of trade tensions and a firmer dollar. Three-month copper on the London Metal Exchange was little changed at $6,132.50 per ton after retreating more than 1 percent on Monday.