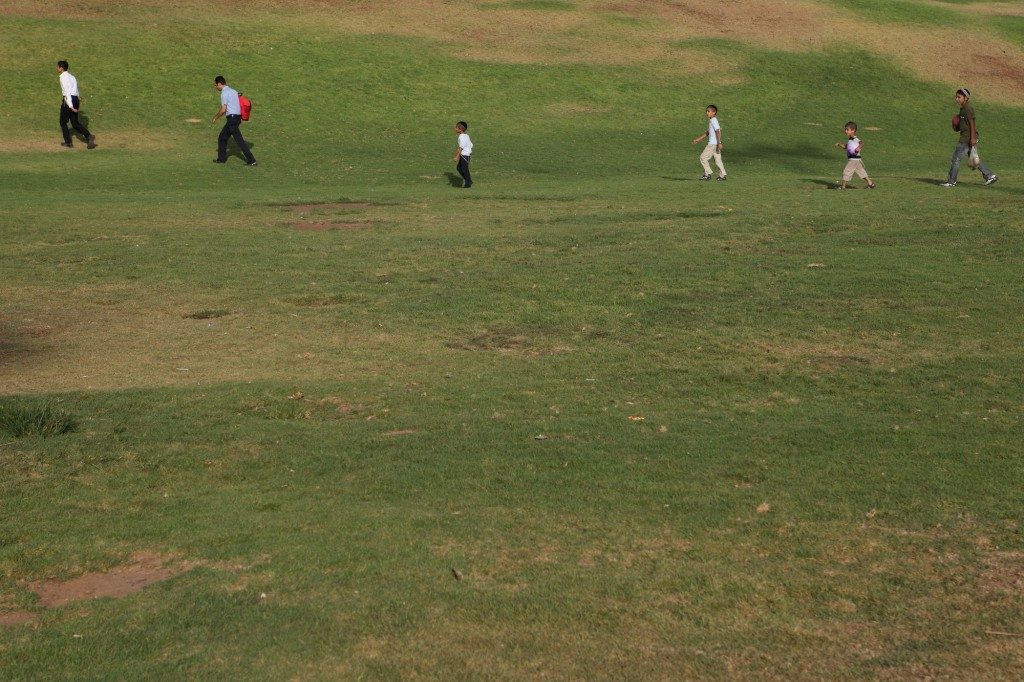 “Even as a young boy, I never missed out on my annual pleasure of meeting the great Torah scholars who came to vacation in the country springs.” So said the righteous Harav Elazar Bein, z”l, describing his youthful experiences with great Torah leaders in the Czech spa village of Marienbad. Throughout his life, he always remembered the special and rare moments he spent with the Torah giants, there among the lush forests of Eastern Europe.

From time immemorial, it was always the custom of our leading Torah giants to vacation during the summer months and gather strength for the upcoming weeks and months. Old photographs show Chassidic Rebbes at ease in green meadows, together with, zt”l, the Brisker Rav, Hagaon Harav Chaim Ozer, Hagaon Harav Baruch Ber and other Torah leaders. There they would take a break from their previous months of toil in learning and would rest and gather strength. Even the photographers of the day realized that this was their rare opportunity to meet and eternalize the great Torah scholars.

But Torah itself never goes on vacation, and one who lives by the Torah understands that life does not stop; one never takes vacation from Torah and mitzvos. A yeshivah bachur is a man of Torah in his entire essence — even during bein hazmanim (the three-week summer vacation between Tishah B’Av and Rosh Chodesh Elul).

For the vacation that a Torah man takes is not the “vacation” of the rest of the world. Bein hazmanim is dedicated solely, as it has been for generations, to giving space and providing a breather between the semesters of yeshivah learning. It is a time in which yeshivah students, who work hard all year at their studies, gather strength for the coming year of learning.

A yeshivah student does not allow himself to “go wild” or “fall apart,” Heaven forbid, during this period. He remains faithful to Torah values even without the yeshivah framework that protects and shelters him throughout the rest of the year.

A yeshivah bachur should always remember that wherever he steps, he is judged and measured — especially during this stormy period when the entire status of yeshivah students is under such close scrutiny in the courtroom of public opinion. There are those who seek again and again to dismantle our precious structure — the soul of the nation — and draft increasingly more yeshivah boys into the army. A Torah man must serve as an example even when in the middle of a hike in the hills or a swim in a brook. The prophet Yeshayahu tell us, “Those who put their hope in Hashem shall replace their vigor” (40:31) — meaning not that they replace their faith, but that they renew their strength. We live by the same Torah during the year and while on vacation.

Recently, the city of Givat Shmuel near Bnei Brak caused a storm by closing its central parks to anyone who is not a town resident. This of course meant that thousands of Bnei Brak families could not visit these parks for a few hours of family relaxation. Givat Shmuel’s chutzpah was such that it made the move precisely during the Three Weeks, and not, as they tried to claim, throughout the entire summer vacation.

Coming to the defense of chareidi rights in this case was none other than the Knesset chairman of the left-wing Meretz party, MK Ilan Gil’on. “This is a clear case of ugly discrimination,” he said, “based solely on the hatred of those who are different. Behind all the excuses, we can see that the Givat Shmuel Municipality is simply seeking to prevent chareidi families from enjoying its parks.”

In the end, the pressure was successful, and the city was forced to give in and open its parks “even” to chareidim from Bnei Brak.

But it just might be that this is our chance to realize that we don’t have to give them reasons to want to distance us. We must make sure that when we visit public parks and vacation spots, we leave no trash behind, and in general do not attract negative attention. We can sanctify G-d’s Name just by the way we conduct ourselves while on vacation.

In just the past week, the number of tragedies that have happened in the Jewish world is unbearable. To name a few: Last Wednesday a yeshivah student, Ariel Darsinover, z”l, of Petach Tivkah, who was about to be married in three weeks, was killed in a car accident. That same day, a 14-year-old boy jumped into the Jordan River, sustained a critical head injury and passed away a few hours later.

And still on that same day, Yael Basiss, a”h, from Elad, mother of four, was killed in the French Alps in a head-on collision, and a year-old baby passed away after drowning in a bucket in his home in Yerushalayim.

This past Monday, a five-year-old girl drowned in a pool in the Galil.

We do not know Hashem’s ways, but we do know that we have to do whatever we can to watch over our children and ourselves.