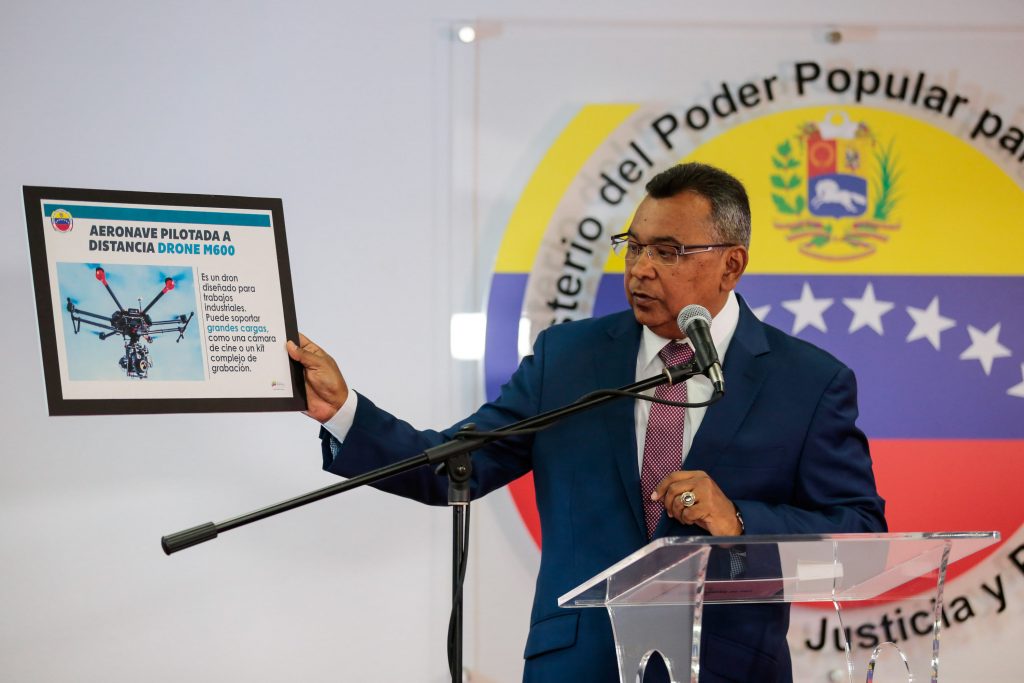 Venezuelan authorities said on Sunday they have detained six people over drone explosions the day before at a rally led by President Nicolas Maduro, as his critics warned the socialist leader would use the incident to crack down on adversaries.

The suspects launched two drones laden with explosives over an outdoor rally Maduro was holding in downtown Caracas to commemorate the National Guard, Interior Minister Nestor Reverol said. One was “diverted” by security forces while the second fell on its own and hit an apartment building, Reverol said.

The attack highlights Maduro’s challenges in maintaining control over the OPEC nation, where widespread food and medicine shortages have fueled outrage and despair everywhere from hillside slums to military barracks.

“These terrorist acts represent a slap in the face to the expressed desire of the President of the Republic, Nicolas Maduro, for national reconciliation and dialogue,” Reverol said in a statement read on state media.

The president later described the attack, which injured seven soldiers, as an assassination attempt.

One of the suspects had an outstanding arrest warrant for involvement in a 2017 attack on a military base that killed two people, Reverol said, an incident that followed four months of anti-government protests.

A second suspect had been detained during a wave of anti-Maduro protests in 2014 but had been released through “procedural benefits,” Reverol said, without offering details.

He did not name the suspects.

The arrests suggest the attack was less a military uprising than an assault led by groups linked to anti-Maduro street protesters, dubbed “The Resistance,” who have led two waves of violent demonstrations that left hundreds dead.

That is consistent with the shadowy group that claimed responsibility for the attack, The National Movement of Soldiers in T-Shirts, whose website says it was created in 2014 to bring together different groups of protesters.

Reuters was unable to independently confirm the involvement of the group, which did not respond to requests for comment on the arrest announcements, or identify any of its members.

Leopoldo Lopez, formerly mayor of Caracas’s district of Chacao, for example, is under house arrest for his role in 2014 street protests that Maduro described as a coup attempt but his adversaries insisted were a form of free expression.

“We warn that the government is taking advantage of this incident … to criminalize those who legitimately and democratically oppose it and deepen the repression and systematic human rights violations,” wrote the Broad Front opposition coalition in a statement published on social media.

Maduro’s allies counter that the opposition has a history of involvement in military conspiracies, most notably in the 2002 coup that briefly toppled socialist leader Hugo Chavez.

“I have no doubt that everything points to the right, the Venezuelan ultra-right,” Maduro said on Saturday night. “Maximum punishment! And there will be no forgiveness.”

Maduro, who blames the country’s problems on an “economic war” led by adversaries during the course of his five-year rule, has often announced having foiled military plots against him that he says are backed by Washington.

U.S. national security adviser John Bolton told Fox News in an interview on Sunday that the United States was not involved in the blast.