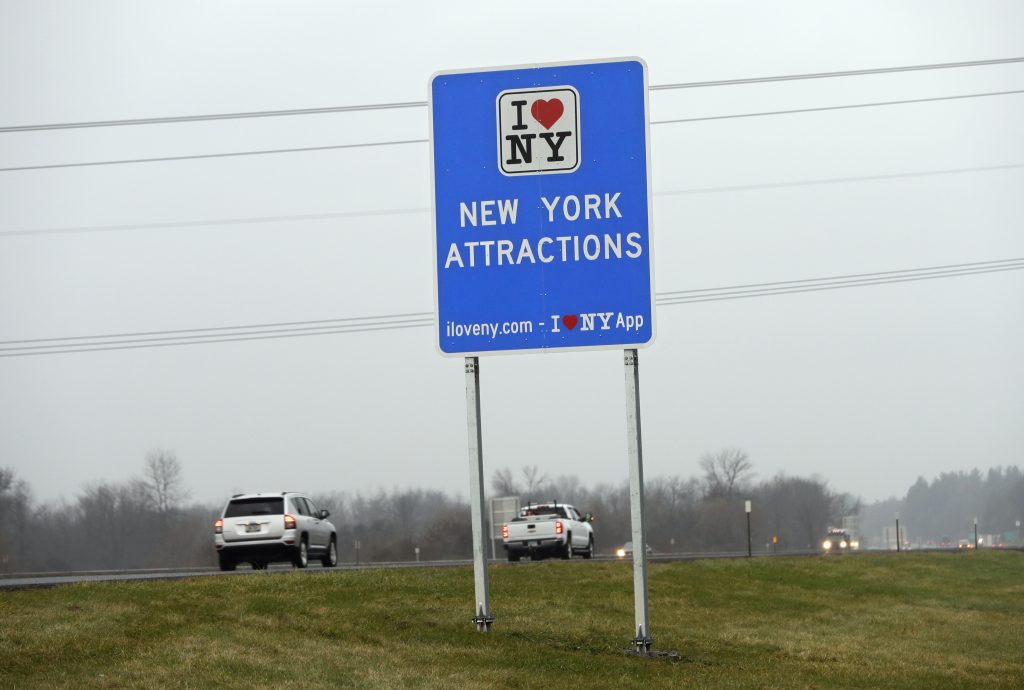 The big, blue “I Love NY” signs lined up in groups of five along New York state highways and roads are hard to miss. And that, say federal transportation officials, is the problem.

The 500-plus tourism signs the state has installed from Long Island to Buffalo are at the center of a yearslong standoff between the Federal Highway Administration and Gov. Andrew Cuomo.

The agency says the signs don’t meet regulations and pose a potential distraction to drivers traveling at high speeds, and it has demanded that the state remove them by Sept. 30 or lose $14 million in federal highway funding. New York’s transportation department, however, has said the signs don’t pose a safety risk and there’s no evidence they’ve directly contributed to any accidents.

Despite Cuomo’s assurances that the tourism campaign had run its course and the signs would be dismantled by the start of the summer vacation season, no signs have been removed.

“If the governor had put his ego aside, adhered to federal highway rules and found some way to compromise before he disregarded the law, we could have avoided this embarrassing debacle,” said Assemblyman Joseph Errigo, a Republican from western New York.

While the “I Love NY” logo (with “Love” depicted as a heart symbol) has been around for decades, Cuomo launched the initiative to put it on highway signs in 2013 as part of a campaign to boost the state’s $100 billion tourism industry.

The plan called for erecting five-sign groups, with the first in each series featuring logos for four specific tourism categories under the words “The New York State Experience.” The next four signs feature those categories: “Attractions,” “History,” “Eat & Drink” and “Recreation.”

After the first signs were installed, the program was expanded in 2016. Even before then, however, the Federal Highway Administration had told the state the signs didn’t comply with federal standards because they’re too big (sizes range from 6 feet-by-8 feet to as large as 10 feet-by-15 feet), contain too much information (website addresses are a particular no-no) and don’t provide any navigational information.

Despite the Federal Highway Administration’s warning, the Cuomo administration went ahead with the sign project, which cost state taxpayers more than $8 million. That comes out to about $15,500 to make and install each of the 514 signs, many of them posted along the 570-mile, state-run New York Thruway system.

Cuomo, widely considered a candidate for president in 2020, has defended the signs, once calling them “a great, great success for this state.” He considers them a key component in spurring the state’s tourism industry, which the administration says attracted nearly 244 million visitors in 2017, a 4 percent increase over the previous year.

State officials have been vague about the signs’ fate but said this past week that they “fully expect to have a mutually beneficial agreement in place well before the September deadline.”

According to Nancy Grugle, a Colorado-based distracted driving expert, an in-depth analysis of New York’s tourism signs would have to be conducted in order to determine whether they’re a distraction to drivers.