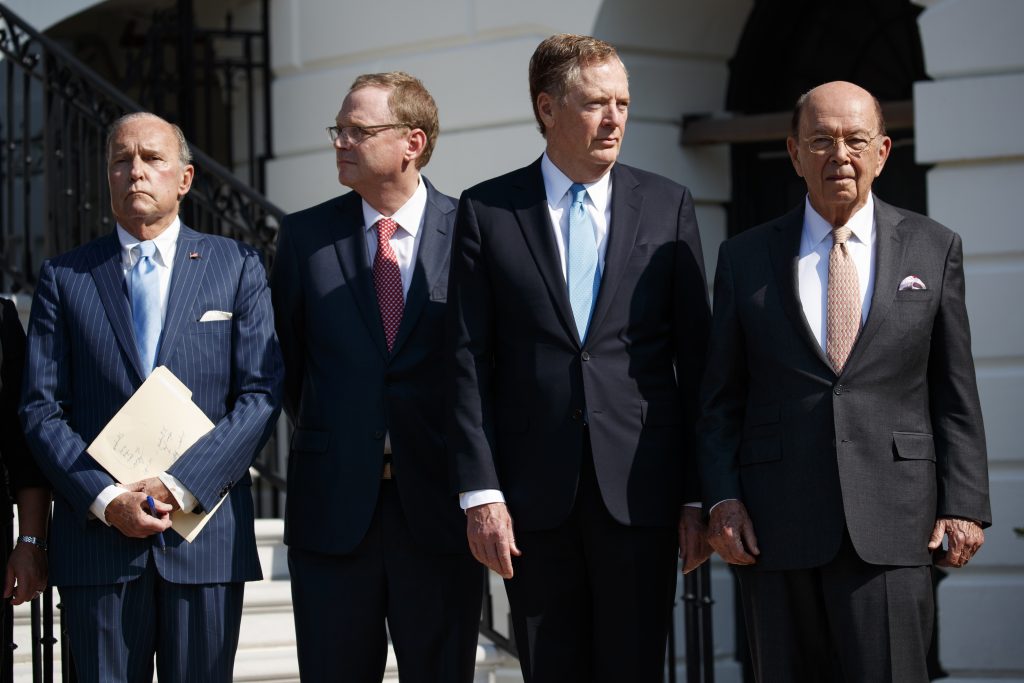 “We’ve said many times: no tariffs, no tariff barriers, no subsidies. We want to see trade reforms. China is not delivering, OK?” National Economic Council Director Larry Kudlow said in a Bloomberg interview on Friday. “Their economy’s weak, their currency is weak, people are leaving the country. Don’t underestimate President Trump’s determination to follow through.”

China also signaled on Friday it has no intention of retreating from a trade war. The government announced it has prepared a list of $60 billion worth of U.S. goods to hit with duties should the U.S. follow through on a plan to impose duties on an additional $200 billion of Chinese goods, as early as next month. The Chinese duties ranging from 5 percent to 25 percent will be levied on 5,207 kinds of American imports, the Ministry of Finance said in a statement on its website.

The retaliation stands to further inflame tensions between the world’s two biggest economies. It echoes China’s response to the previous round of tariffs last month, when the U.S. and China imposed tariffs on $34 billion worth of each other’s’ goods.

Another $16 billion in U.S. levies on Chinese goods will likely follow in the coming days or weeks, which Beijing has said it will retaliate against in-kind.

In addition, Trump this week ordered officials to consider imposing a 25 percent tax on $200 billion worth of imported Chinese goods, up from an initial 10 percent rate. The move was intended to bring China back to the negotiating table for talks over U.S. demands for structural changes to the Chinese economy and a cut in the bilateral trade deficit. Friday’s retaliation from China suggests that tactic hasn’t worked.

U.S. and Chinese officials have held “hardly any conversations” in the past month, but there’s “some hint” the Chinese may be warming to the idea of negotiations, Kudlow said. There’s recently been some communication at the highest levels, he told reporters outside the White House.

Three rounds of trade negotiations between senior U.S. and Chinese officials earlier this year centered on U.S. demands for China to make structural changes to its economy and to reduce its trade surplus with America. On Friday, U.S. data showed the merchandise trade gap with China slightly widened in June to $32.5 billion after May’s $32 billion.

The U.S. tariffs now in place or threatened add up to almost half of the value of goods it imported from China last year. The Chinese side seems to be seeking to match that ratio with the new proposals.

Chinese authorities — bracing for economic fallout — have taken a range of measures in recent weeks to bolster the economy. On Friday officials stepped in to cushion the yuan, which has been battered by trade tensions and was approaching the key level of seven to the dollar.

The People’s Bank of China will impose a reserve requirement of 20 percent on some trading of foreign-exchange forward contracts, according to a statement on Friday evening. That will effectively make it more expensive to short the yuan, and is a tactic that the central bank used to stabilize the currency in the aftermath of its shock devaluation in 2015.

Kudlow said the weaker yuan indicates that investors have questions about the strength of China’s economy, adding a lack of intervention to prop up the yuan is helping cushion the impact of the trade war for China. A weaker currency usually makes exports more competitive.

“Some of the currency fall though, I think, is just money leaving China cause it’s a lousy investment and if that continues that will really damage the Chinese economy,” Kudlow said on Friday.

China is trying to seek an “equal” position in future talks with the U.S. with Friday’s retaliation announcement, said Gai Xinzhe, analyst at the Bank of China’s Institute of International Finance in Beijing. “Any talks in the future, should they happen, should be conducted on an equal and faithful basis.”

“China’s differential tax rate countermeasures are rational and restrained,” the Ministry of Commerce said in a separate statement on its website. “The implementation date will be subject to the actions of the U.S., and China reserves the right to continue introducing other countermeasures.”