Business AUTO REVIEW: Indecisive About Which Sports Sedan to Buy? Not Once You Drive the Genesis G70
Business 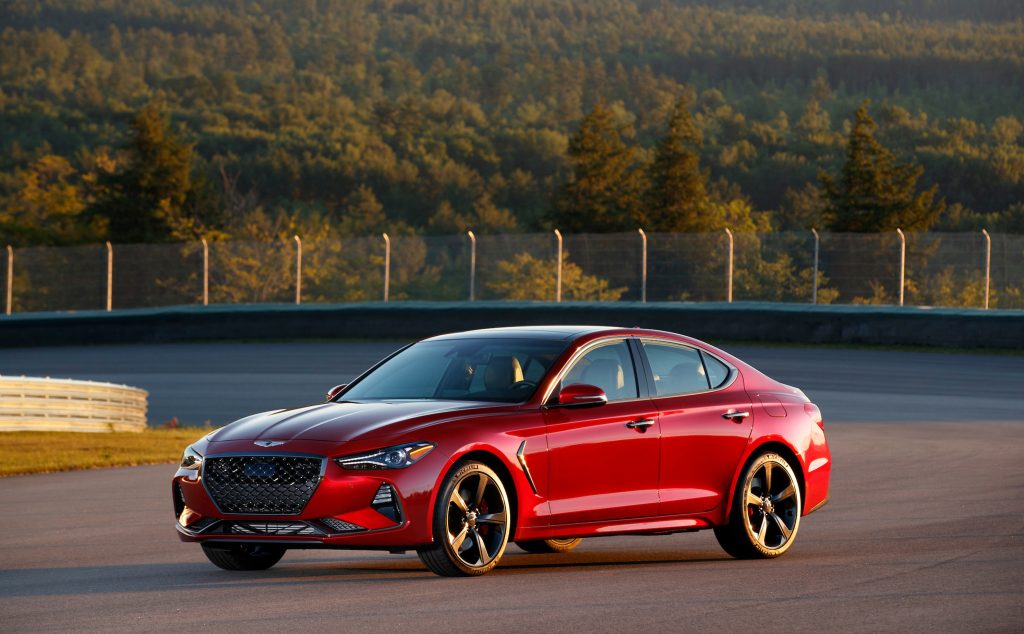 Life is nothing but a series of never-ending choices, ones that slowly shape our lives. Chocolate or vanilla? Rent or buy? Sweater or hoodie? Apple or Android? iPad or Kindle? … Lacoste or Polo? Ice cream or cake? SUV or sedan?

With so many decisions to be made every day, it’s natural that anyone can become indecisive, even automotive executives.

Take Hyundai, for example. In 2008, they launched their first premium sedan in the U.S., the Hyundai Genesis, followed shortly thereafter by the Hyundai Equus. However, selling a luxury Hyundai is like selling Walmart-branded Gucci. So Hyundai execs changed their minds. They created a new luxury brand in 2015 named Genesis, leading the automaker to rebadge the Hyundai Genesis as the Genesis G80. A redesigned Hyundai Equus debuted at the same time as the Genesis G90.

Initially, Genesis cars were sold in Hyundai dealers. But Hyundai executives changed their minds once again in January, deciding that Genesis vehicles would be sold in exclusive Genesis stores. Dealers that were already selling Genesis, and had invested millions to upgrade their showrooms as Hyundai required, weren’t guaranteed a new franchise. Naturally, outrage erupted, followed by a compromise in May. Now, Genesis is available to all Hyundai dealers as long as they open stand-alone Genesis stores by January 2021. So far, 173 dealers are in the process of opening one, with the initial handful opening in the next few weeks, according to Genesis spokesperson Kevin Smith. Hyundai expects to have 400-plus dealers on-board by early next year, with the remaining 400 or so opting not to participate.

Into this unsteady retail environment enters the G70, the final sedan in Genesis’ luxury lineup, and the first model not born as a Hyundai. So let’s hope that executives don’t change their minds about selling it; the G70 is an excellent new luxury compact sedan.

Still, it follows the template established by the rival BMW 3 Series. The compact G70 sedan comes with rear-wheel drive or optional all-wheel drive. The front seat is spacious, while the rear seat is best for small children or luggage. Trunk space is adequate.

The G70 employs a shortened version of the chassis used by its corporate sibling, the Kia Stinger but feels more mature. Like the Stinger, Albert Biermann, who spent 30 years at BMW’s M performance division and is president of vehicle performance division of Hyundai Motor Group, oversaw the G70’s handling. Upon his arrival in 2015, the G70 became his first priority.

You can feel the results once behind the wheel. This car’s handling is exemplary, an accomplished blend of European and Korean priorities, especially when equipped with the electronically controlled sport suspension. Twisting its knob to Sport mode changes this car’s demeanor from mild to wild. The driver’s seat side bolsters tighten, preparing you for the thrill ride to come.

Driving the G70 V-6 model reveals this car’s breeding. Polished and appealing, the V-6 provides plenty of muscle for suburban parkway sprints, reaching 60 mph in 4.5 seconds while it making all the right noises. There’s plenty of grip for tackling corners or roundabouts thanks to the V-6 model’s torque vectoring. Yet it’s not at the expense of ride comfort — a laudable feat. The motor-driven power steering provides more precise steering feel than electric units, while the high-performance Brembo brakes effortlessly bring matters to a halt. Note that rear-wheel-drive V-6 models also get a mechanical limited-slip differential, which is optional on four-cylinder models.

Enhancing the experience is the opulently trimmed, and incredibly quiet, cabin. Decked out in extravagant diamond quilted upholstery and accented with aluminum trim, the Genesis feels above its station, despite the presence of plastic. And it’s the small conveniences that make this car a true pleasure, such as the proximity key with push-button start, power windows with front and rear auto-up/down, electronic parking brake, 8-inch infotainment screen with Apple CarPlay and Android Auto, power-folding auto-dimming exterior mirrors, Lexicon 15-speaker surround sound audio system, heated and ventilated front seats and much more.

Yes, there are many choices in this segment. But the Genesis G70 is slightly different flavor, offering a balance of comfort and sportiness that’s a bit more compelling than its rivals. Once you drive the 2019 Genesis G70, you’ll find it’s easy to make up your mind.